Barry Greenwood's name came up during a discussion with Paul Dean. Paul recently published an article, The Fake 1961 "Special National Intelligence Estimate", and a $1000 Offer To Prove It Genuine... at his blog, UFOs - Documenting The Evidence. The alleged SNIE recently received attention when it was identified as the MJ-12 document endorsed as being authentic by Dr. Hal Puthoff of To The Stars Academy. Majestic 12, or MJ-12 is the alleged US government group in charge of covering up the UFO secrets, supported only by counterfeit documents from anonymous sources.
Talking to Paul about UFO documents (genuine and otherwise) and the role they played in UFO research, I wondered if anyone had ever done a historical overview. Paul suggested I check with an expert.

Barry Greenwood is a UFO historian, and he is currently engaged in diligent work to archive original literature and documents for posterity. He co-authored Clear Intent with Lawrence Fawcett in 1984, later reprinted as The UFO Cover-Up. 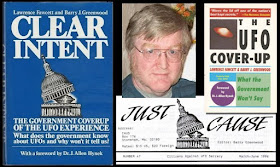 In 2007, Barry co-authored a paper with Brad Sparks, “The Secret Pratt Tapes and the Origins of MJ-12.” With Paul’s prompting, I emailed Barry and asked him for his view, noting:

This recent noise about the SNIE document has me wondering about the contrast between the fakes and the genuine instances of leaked documents. …Donald Keyhoe received some leaked material, but it was contemporary, not the allegedly decades-old stuff that periodically surfaces.

Barry Greenwood promptly replied and graciously gave me permission to share his thoughts, presented here as a guest column.

With regard to Keyhoe, he received contemporary documents from known sources. Sometimes, sources were not named but the information was not sensationalized and survived the passage of time. In Flying Saucers- Top Secret, he talked of "Hidden Cases" where they were aggravatingly thin on researchable detail. I spent time over the last three years in the NICAP files looking for these reports but they are missing. Keyhoe was derelict in not having safety copies of these reports in a safe place and now they are lost to history. I asked Gordon Lore about this but he was not in the loop. I guess Keyhoe thought he could live forever!

There was always hoaxing in this subject but the transition of the usual hoaxing to deliberate falsification of government documents crossed a line in the late 1970s. We finally had achieved some sort of credibility in what the government knew about UFOs by gaining access to official inquiry and investigations that revealed they didn't quite know what it was with what they dealt. Then a few fakes appeared followed by one in the military [Richard Doty] who planted fakes in government files and had those officially released via FOIA, a nefarious act that was eventually supported by major names in UFO research. This same source continued to circulate questionable documents as real. But by then every government paper officially released had a taint of "how do you know that is real?" A more effective watering down of what we had achieved, I can't recall and it took little effort.

So now more "leaks" about the same topic [MJ-12] still appear over 40 years later and are still embraced as genuine despite this long history of hoaxing and taint. The persistence is eye-opening and has the appearance of a cult relentlessly pushing their agendas. What really astonishes me is how a very simple rule of thumb has been, and is being, ignored. I explained very clearly in Clear Intent that provenance of documents is vital to the credibility of the information. We filed FOIAs and kept cover letters to establish the sources of the information as authentic, already knowing that fakery was underway and illegitimately competing for the attention of UFO researchers. The common theme of the fakes was that the sources were mysterious and it took a leap of faith to accept the contents. A large percentage of people are gullible, even very gullible, about the sensation of information on UFOs. If the information promised to satisfy articles of belief, it was embraced before any investigation as to the authenticity of that information. I think this contributed to Stan Friedman's rabid promotion of questioned documents. Not knowing from where information came opens the door to fiction becoming fact in the minds of ones seeking quick conclusions about a mysterious topic.

With regard to the SNIE paper, Paul may have told you the details but he approached me a while back with this document. He said it came from a prominent person [affiliation redacted] who wanted input as to whether or not is was genuine. It took about ten seconds to see it was another MJ-12 hoax, again unattributed as to source and likely from the Richard Doty/Tim Cooper school of document fakery. Cooper has said he had about 4000 pages of “leaks" acquired under very suspicious circumstances, which could provide a years-long supply of continuous attention to the MJ-12 conspiracy. Cooper eventually admitted all the documents were fake.

But what is disturbing is that despite the history of this story churning like an upset stomach, seemingly high profile people involved with the effort to get Congress to investigate UFOs appear to be giving such unattributed ”releases" a stamp of approval. I understand Hal Puthoff declared the SNIE to be genuine along with who knows who else in that group [TTSA]. It is nonsense from a long-term hoax effort but linking this to the new efforts to get the military and Congress to research will do profound damage to these efforts. The UFO subject needs to grow up and pay more attention to what has happened which provides perspective to what is happening.