The Miracle of Fatima: Photographic Proof from the Vatican and LIFE magazine?


LIFE magazine used to be a vital part of the average American household, delivering a mixture of news and entertainment, always accompanied by large, striking photographs. In 1951, they carried some sensational news about the 1917 "Miracle of the Sun" at Fatima in Portugal. The Vatican had released photographs as proof of it, evidence of "rigorously authentic origin." 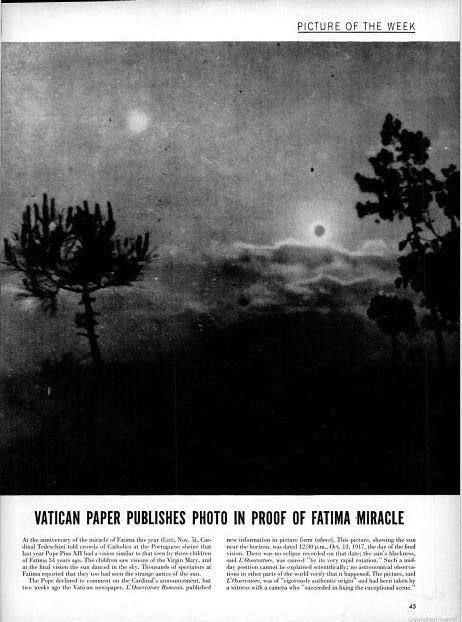 VATICAN PAPER PUBLISHES PHOTO IN PROOF OF FATIMA MIRACLE At the anniversary of the miracle of Fatima this year ( Life, Nov. 5), Cardinal Tedeschini told crowds of Catholics at the Portuguese shrine that last year Pope Pius XII had a vision similar to that seen by three children of Fatima 34 years ago. The children saw visions of the Virgin Mary, and at the final vision the sun danced in the sky. Thousands of spectators at Fatima that they too had seen the strange antics of the sun. The Pope declined to comment on the Cardinal's announcement, but two weeks ago the Vatican newspaper, L’Osservatore Romano, published new information in picture form This picture, showing the sun near the horizon, was dated 12:30 pm, Oct. 13, 1917, the day of the final vision. There was no eclipse recorded on that date; the sun's blackness, said L’Osservatore, was caused "by its very rapid rotation.." Such a midday position cannot be explained scientifically; no astronomical observations in other parts of the world verify that it happened. The picture, said L’Osservatore, was of "rigorously authentic origin" and had been taken by a witness with a camera who "succeeded in fixing the exceptional scene.”

A reader speaks out; the Retraction:

PICTURE OF THE WEEK Sirs: Recently you gave the distinction Picture Picture of the Week (Life, Dec. 3) to a picture of the Fatima "miracle" published in L Osservatore Romano as of "rigorously authentic origin." Now that the picture has been designated a fraud by the official newspaper of the shrine of Fatima, I trust that you will publish a retraction, out of journalistic honesty and in fairness to the many doubters who objected to the picture.


The Milwaukee Sentinel story of the photo fiasco had a fascinating quote from the journal, "The Voice of Fatima":


Fatima Pictures Reported Made Long After Miracle
The Shrine of Fatima’s official newspaper... “The Voice of Fatima,” said:

“In the interests of accuracy we would like to state that the photographs...were not in fact taken on that date but several years later (May 13, 1921, near Torres Novas) during an atmospheric effect at sunset. They were thought to resemble the October prodigy and were published in Portugal at the time but later withdrawn in order to avoid confusion. There is no photographic record of the sun on the original date and indeed, if the effect is supernatural, it would be unlikely to be recorded by the camera.”

If I understand correctly, then the fuss was over nothing.
God, Mary and Miracles are "unlikely" to be photographed.

The photo printed in LIFE magazine still circulates on the Internet as genuine...