The Placard of the Roswell Slides: The Final Curtain


The Roswell Slides second biggest mystery was the content of the placard on the alleged alien body.

Several statements were made about it, some contradictory: 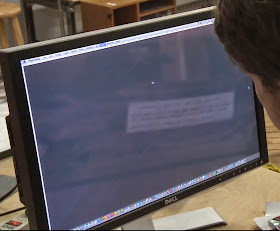 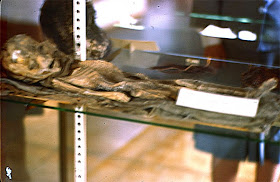 The Roswell Slides and the Truth by Anthony Bragalia
This ‘placard’ is not very evident in the video grab image. However, it has been enlarged by experts and the writing, in red ink, is handwritten, not typed, as would be found in a biological display in a museum.
http://kevinrandle.blogspot.com/2015/02/the-roswell-slides-update-by-tony.html

Tom Carey was interviewed about the Roswell Slides on the March 22, 2015 episode of Jaime Maussan’s Contacto on Tercer Milenio TV. Carey said that experts have been able to read some words on the placard on the case and that, “debunkers will be disappointed.”

This will be part of the event, part of the program in May, that all of these analytical reports, all of the analyses, all of the main experts as well as the photographic experts who examined- there’s a placard, very fuzzy, that can not be legibly read by the naked eye, yet we’ve had everyone from Dr. David Rudiak, to Studio MacBeth, even the Photo Interpretation Department of the Pentagon, as well as Adobe have all told us that it’s beyond the pale, that it cannot be read, it is totally up to interpretation.

So, we truly feel we have performed due diligence; we have done everything we can to substantiate and prove what is contained within these slides, whether it is something of a human malady or something truly extraordinary. https://youtu.be/fQyAVrFnTos?t=1h24m2s 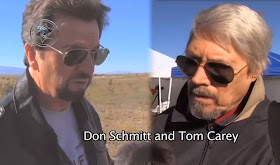 During BeWitness, it was announced that despite the work of a number of experts, the placard could absolutely not be read.

In the second slide the placard was visible, and the writing was evident, if unclear. 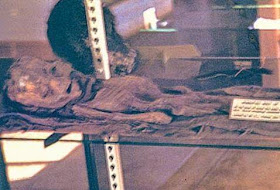 "We couldn't make anything clearly out of the placard... several others, who did not have much luck." - Adam Dew

"Nobody could read anything decisively in the placard, unfortunately. I am sure people will make attempts to do this going forward...." - Adam Dew

He was right, and most of the placard has now been read.


A member of The Roswell Slides Research Team used a newly acquired source image of the placard seen in front of the body. By manipulating the commercial software, SmartDeblur, he managed to significantly clear up the blurred text. Other members offered suggestions and helped narrow down the actual words.

The first line was the most clearly resolved:
MUMMIFIED BODY OF TWO YEAR OLD BOY
There is little doubt that this is the true and correct text. The other 3 lines of the text are somewhat hard to read, some words more clear than others. The original results yielded:


The entire effort only took hours, quite a difference from the claimed “years” of research that the Slides promoters camp claimed. Because the Slide hucksters haven’t released proper high resolution scans of the slides, our work was made more difficult. We could probably get clearer results from better images.

The mystery of the placard is solved, and so is the nature of the body in the case.

A boy, from Earth.

The question then, becomes, how was this not discovered by the experts examining the case in the years of investigation?

Thanks to our colleagues and associates, including Alejandro Espino (for the
Israel Ampuero team, Spain), Philippe Hernandez, Jeff Ritzmann, Aaron J Gulyas, Irna France, Nick Redfern, Fin Handley and many, many more who provided help.