The Ancient Aliens episode of February 15, 2020, featured a segment on the Cash-Landrum case with a new interview with witness Colby Landrum. Improbably, it was part of “The Real Men in Black,” a show focused on the mythical MIB first made famous by Gray Barker in the 1956 book, They Knew Too Much About Flying Saucers. In the C-L segment, the show is talking about “men in black helicopters.” It seems like they filmed the Colby Landrum interview and didn’t know where else to put it, so they sandwiched in this episode with MIB commentary from the show’s regulars. 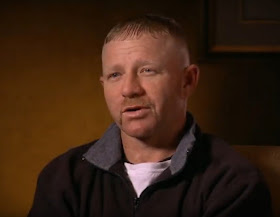 There was nothing new in Colby Landrum’s brief recap of the events, but emphasis was placed on the claim that military helicopters were involved, the central position of the failed attempt to bring a lawsuit against the U.S. government. Colby said:

”In my belief, the government definitely knew about it. There's no way that something of that size is gonna have 23 Chinook helicopters. They were in, like, escort mode. They were definitely transporting it.”

The show presented it as a matter of fact that the victims were exposed to ionizing radiation, despite the fact that tests given to Betty Cash came back negative. Dr. Peter Rank, was a radiologist and a consultant for MUFON. Early in the case, he was asked by the investigator to evaluate the medical aspect. While Dr. Rank thought Cash had been injured, he couldn’t determine the cause, however, he didn’t consider it serious or life-threatening. From his letter to Vickie Landrum:

Getting back to the "History" show…

The only thing new Ancient Aliens presented was something suspect, a short bit with comments from JoAnn Donaldson, labeled on screen as “Former Bio-Medical Research Engineer, NASA.” 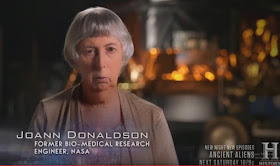 Narrator: "Following the incident, all three witnesses were examined at a NASA-run laboratory for radiation exposure. JoAnn Donaldson was a member of the NASA medical team that conducted the examination."
JoAnn Donaldson: "Our role was to make sure all of the readings, uh, were recorded correctly and accurately, and that everything was documented accordingly to the established protocols for doing a radiation testing. They did get radiation exposure, and I fully believe that their story was absolutely true. There was no fabrication in that experience.”

Examined by a NASA medical team? That’s news to me. JoAnn Donaldson from her description on Instagram:
"From being a old Apollo era Engineer to working for the DEA, then retiring. Now I am a minor cast member of the History Channel #AncientAliens.”

There were a few medical examinations of the C-L witnesses several months after the fact, but there’s no records to support the radiation findings that Donaldson states. Or that she was part of such an alleged examination team.

In case you missed it, here's a site with a transcript:
Ancient Aliens s15e04 Episode Script: The Real Men in Black

There is some more substantial news related to the Cash-Landrum case. Dr. Gary Posner became interested in the medical aspects of the Cash-Landrum case in late 1981 and conducted his own research. At his website he’s just created a new page on the case, presenting his correspondence with people involved, including the previously mentioned radiologist, Dr. Peter Rank. As Dr. Posner states in the correspondence, he was an Internist, but he familiarized himself with medical texts on types of radiation in order to understand if the reported injuries were consistent with documented effects of  radiation exposure. His results were negative. 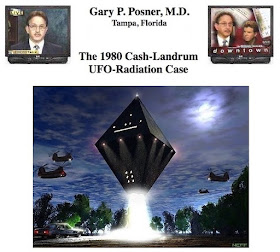 In addition to the documents and his analysis, he’s also shared his audio recording made of the 1981 segment on the Cash-Landrum story from That’s Incredible!, famous for the hypnotic regression of Vickie Landrum by Dr. R. Leo Sprinkle.

It’s rare to have pristine copies of correspondence documenting UFO investigation, so Dr. Posner should be applauded for sharing this collection with the public.