The following is a list of important documents, reports, correspondence, news and magazine articles relating to the investigation of the December 29, 1980 UFO encounter reported by Betty Cash, Colby and Vickie Landrum. 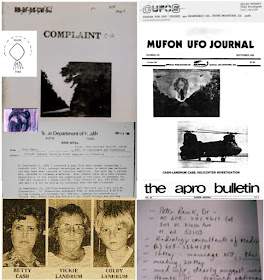 When possible, links are included to the material hosted on the Internet.
As new items become available, this page will be updated.
The Cash-Landrum UFO Case Document Collection

Who's Who in the Cash-Landrum UFO Case
Mini Bios of the Witnesses & Key Players:
http://www.blueblurrylines.com/2014/02/whos-who-in-cash-landrum-ufo-case.html

The Spectrum of UFO Research, J. Allen Hynek Center for UFO Studies, Mimi Hynek, ed. (1988)
John Schuessler's first lecture on the Cash-Landrum case from Sept. 1981 is presented, and it serves as as an excellent introduction to the case, telling the story of the events, and discussing the early months of the investigation. The narrative of the encounter is followed by speculation about the injuries and their source. Includes photographs, the Q & A session that followed Schuessler's lecture, and his 1988 update on the case.
http://www.cufos.org/books/The_Spectrum_of_UFO_Research.pdf

Legal Documents: From the Damage Claims Form to the Attempted Civil Lawsuit
Quest Publication: The Cash-Landrum File: Civil Action No. H84 348
Additional legal documents.
http://files.afu.se/Downloads/Books/Digitized_by_AFU/Quest_Publications/Quest_Publications_101-Cash_Landrum_File-Civil_Action.pdf
CUFON (Computer UFO Network) also hosts a collection of documents connected to the legal case.
http://www.cufon.org/cufon/cashlanC.pdf
http://www.cufon.org/cufon/cashlanL.pdf
(Note: The Defense conducted an investigation about if the UFO was a US military device. No documents from this investigation have surfaced.)

Pursuit: Science is the Pursuit of the Unexplained
First Quarter 1985, pg.18-21
"Diamond Fire- A Close Encounter of the Military Kind" by Harry Lebelson
http://www.ignaciodarnaude.com/avistamientos_ovnis/UFO%20Sighting%201980,Texas,25%20helicopters-2.pdf

MUFON UFO Symposium Saint Louis, Missouri, June 28, 29 & 30 1985
"The Medical Evidence in UFO Cases" by John F. Schuessler.
"Proof Beyond a Reasonable Doubt" by Peter A. Gersten (link to cover and table of contents only)
http://www.gbv.de/dms/tib-ub-hannover/01664252X.pdf

The Cash-Landrum UFO Incident
Three Texans Are Injured During an Encounter with a UFO and Military Helicopters
by John F. Schuessler (1998 LaPorte, Texas Geo Graphics Printing Co) out of print
http://www.amazon.com/Cash-Landrum-UFO-Incident-John-Schuessler/dp/B0006QXNOS/ref=sr_1_1?s=books&ie=UTF8&qid=1374870093&sr=1-1&keywords=cash+landrum

Television Coverage: See this article for a collection of television reports on the case:
http://blueblurrylines.blogspot.com/2012/07/cash-landrum-video-documentary.html

If you know of major omissions, please report them to