Remembering Donald Keyhoe and the Birth of Ufology

The end of December marks the anniversary of the Cash-Landrum case, which we traditionally remember this time each year. Betty Cash, Colby and Vickie Landrum reported a terrifying UFO encounter that they said changed their lives on Dec. 29, 1980.

Without the field of Ufology, the Cash-Landrum sighting might have have been forgotten and the story never revealed or investigated. Without Donald Keyhoe, there might never have been Ufology. This year, we look at the 70th anniversary of the article that established the foundation for the civilian study of UFOs.

Beliefs about extraterrestrial visitors goes back much further than the flying saucer wave of 1947, but it was mostly a matter for the fringe, from spiritualists and Forteans to crackpot science fiction fans. That began to change in December of 1949, when the news was abuzz over an article, "The Flying Saucers Are Real" by Donald E. Keyhoe in True magazine, cover dated January 1950. The article prompted a negative reaction by the Air Force.

Donald Keyhoe was a retired Marine Major who had been writing professionally since the 1920s, everything from nonfiction aviation to pulp fantasy and science fiction. True magazine had been working on an article on flying saucers, but was stumped. Editor Ken Purdy assigned the job to Keyhoe, knowing his aviation background and military contacts would allow him to dig deeper. It did.

Keyhoe was able to get factual information on cases, and also to get opinion and speculation on flying saucers from military engineers. Despite lacking physical evidence, some of them were persuaded that saucers were aircraft of an unknown design, and the reported performance of this craft exceeded the technical capabilities of anything that could be made on earth. Ergo, flying saucers came from another planet.

Donald Keyhoe’s article helped coalesce several saucer beliefs into a plausible package. His position was: The flying saucers are real, and are interplanetary spaceships. His secondary principle was that the US government knew about UFOs and that they were keeping it secret, in other words, there was a government UFO cover-up.

The military’s policy of secrecy, coupled with their confusion over the UFO situation fed into the suspicion and even paranoia of saucer buffs. The newly-formed Air Force was able neither to explain or control the saucer problem, and they’d tried hard to avoid talking about. When they did, there were often contradictory statements and explanations that just made matters worse. It may have been more of a foul-up than a cover-up.


With the phenomenal success of the article, Keyhoe expanded it into a paperback book released in May of 1950. Much of the flying saucer sensation was fueled by hoaxes, rumors and speculation, but Keyhoe did what no one else could, and he tenaciously focused on real incidents and documentation instead of hearsay. It’s true that his pulp writing style added some drama to the way they were presented, and also some speculation. The Air Force’s Capt. Edward Ruppelt would later offer a left-handed compliment saying, “Keyhoe had based his conjecture on fact, and his facts were correct, even if the conjecture wasn't.”

Keyhoe’s book is more well known today than his article that launched it all. It’s worth remembering an rereading the True magazine piece, where it all the excitement started.

As long as UFOs are discussed, Keyhoe's story will live on.

For more UFO history, join us at our companion site, The Saucers That Time Forgot 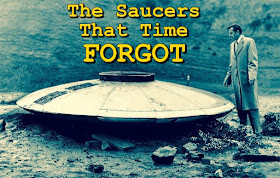