Betty moved to Dayton, Texas where she operated a business with her husband James F. Cash, taking sole ownership after their divorce. After developing health problems, she moved back to Alabama to be cared for by her mother.

She was buried at Cahaba Heights Baptist Church Cemetery in Birmingham, Alabama. 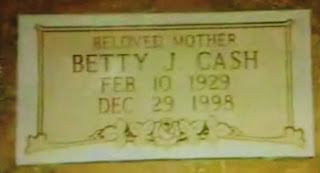 Vicie “Vickie” Marzelia Landrum, 83, of Liberty, Texas passed away Wednesday, September 12, 2007.  She was born on September 19, 1923 in Laurel, Mississippi to Johnny and Emily Holifield.  Vickie liked to play bingo, computer games and sew, but above all she loved to play with and take care of her grandchildren.
Vickie is preceded in death by her parents; loving husband, Ernest Wilson Landrum, Sr.; and 2 brothers. She is survived by her children, Ernest Landrum, Jr. (deceased), Gloria Jean Roper, David Landrum, Paul Landrum, and Jayne Landrum; fourteen grandchildren; twenty-four great-grandchildren; and nine great-great-grandchildren.

She was buried at Ryan Cemetary in Tarkington Prairie, Texas.


(Note: Betty Cash's obituary is my creation based on the scant details available.
Vickie Landrum's obituary appeared in the East Texas News.)