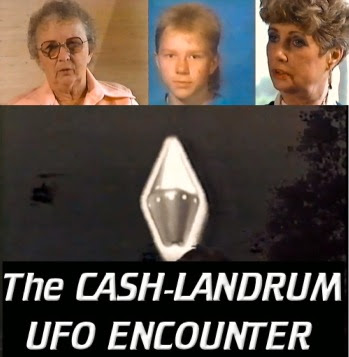 The search for original documents on the Cash-Landrum case continues, and that extends to early media coverage of the events. The story received international attention and was covered at least twice by Japanese Television.

Below is a segment posted on YouTube on the case from a Japanese television show featuring witnesses Betty Cash, Vickie Landrum and investigator John Schuessler. It’s particularly notable for Betty and Vickie participating in a reenactment of the UFO encounter instead of the being portrayed by actors. Colby did not participate and is shown only in a school photograph.

I’ve been unable to locate details on this program, but reportedly, there was a documentary featuring the case filmed in May of 1989, and aired in August in Japan.
"890518 - People from Nippon Television Network of Japan complete Cash Landrum film, interview John Lear... in Houston, Texas.
890923 - Cash-Landrum documentary shown in Japan."

Nippon Television producer Jun'ichi Yaoi was very active in the 80s and 90s and filmed many UFO documentaries shown on NTV, and it is very likely this would have been one of his projects. However, it’s also possible this was an unknown US program dubbed for use in a Japanese broadcast.  I don’t think this clip is from this 1989 show, though. After comparing it against Betty's appearance in the 1988 show below, I feel strongly it must be from something earlier, maybe 1983. While the show mentions Area 51, which surfaced late 80s, but that could be material edited in years later.

Unfortunately, a translation of the program is not available, since the real value in programs like this comes from the opportunity to hear directly from the witnesses themselves. So often direct testimony is not available and we only hear the UFO cases summarized and reinterpreted by others.

If anyone has information on this program or other non-USA shows featuring the Cash-Landrum case, please share the details by contacting Blue Blurry Lines.

Posted by Curt Collins at 10:14 AM No comments: