Robert Sheaffer has been covering the UFO beat a long time, reading the literature, attending conferences, corresponding, debating with the players, and has become a part of its history. In the book,"Bad UFOs: Critical Thinking About UFO Claims," Sheaffer covers a range of UFO cases, topics and personalties from the dawn of the era, up to recent events. Frankly, some of which read like a hall of shame,  and it could have been titled, UFOlogy’s Greatest Misses.” I can picture some scoundrels in UFOtown tearing through the pages, praying that their products and names aren’t in it. Sheaffer does mention a few good eggs along the way, “UFO realists,” but as the title suggests, he’s focused on the bad ones.

Robert Sheaffer, meanie. That’s what some UFO buffs have heard, and skeptics and debunkers are supposed to be attacking the very existence of UFOs, close-minded to the point of denying the truth, and rumor has it that some of them are even discrediting witnesses and evidence. Trace those tales to the source, and you’ll see they originated with phonies who didn’t want their carnival act exposed, people like Silas Newton, George Adamski and Jaime Maussan. The truth is more complicated, but then, that’s why so few people bother with it.

What many UFO/ET proponents fail to appreciate about skeptics and debunkers is that the devils are observing the same kind of claims about extraordinary things on a range of other topics, not just UFOs. There’s more in common with UFOs, Ghost, Bigfoot and Nessie than the ET camp would like to admit, and it lies in the seeker. It’s about the quest for something extraordinary, with belief driving the investigation. The big problem there is that they regularly accept insubstantial evidence if it bolsters their beliefs. Witness testimony is subject to great problems ranging from accuracy to authenticity, and the record of photo and physical evidence shows an alarmingly high tolerance for counterfeits. Sheaffer sees the absurdity and humor in the UFO circus, something the field seems incapable of seeing about itself. Worse, they seem incapable of dealing with frauds, and policing themselves. Like disgraced televangelists, if they have an apology or excuse, proven UFO scoundrels are welcomed back into the fold.

One recurring theme in Sheaffer’s book is that a UFO claim surfaces, gets  embraced by the ET camp, and then is fiercely defended against not only challenges to its authenticity, but even logical questions about it. They get sour when it falls flat, but they are willfully ignoring their own statistics. According to MUFON, 80 to 90% of UFO reports crumble after being investigated, the remnant serving to keep hope alive, designated as “unknowns.”  By cherishing UFO stories before all the facts are in, frequent disappointments are assured.

Sheaffer holds up a mirror to the UFO circus, and many in it won’t like the picture.  Where I disagree with Sheaffer is over the conclusion that the study of UFOs is futile. My personal opinion is that it ufology should work towards co-operating with existing astronomical and meteorological projects, instead of trying to re-invent or duplicate them.  Sheaffer convincingly makes the case that the current value or purpose of UFO study is only self-perpetuation, promoting UFO beliefs: that there’s a mystery and behind it is ET visitation.

The book discusses several key cases, some in detail, others in passing, including famous sightings from Kenneth Arnold to Kenju Terauchi’s report of a giant spaceship to recent cases. In these, he points out the recurring problems with the evidence or the interpretation of it. So often, it comes down to stories, and looking at the alien abduction accounts from Betty and Barney Hill to Emma Woods, these incredible tales emerged through hypnosis. In other stories, like those of Roswell alien bodies and the conflicting claims at Rendlesham Forest, Sheaffer shows that many of the heavily-promoted UFO tales have plot holes, big black plot holes, big enough to swallow planet Nibru.

Chances are, if you are seeing this, you’ll read a UFO book or two this year, and “Bad UFOs” should be one of them. If you are used to taking UFO stories on faith alone, you may want to throw it across the room a few times. Instead, take one of the cases discussed and look up the documentation for it, and to see for yourself if the facts back up the legends you’ve been told about it. The cases that hold up to the challenges of skeptics are the one really worth pursuing.

About the UFOs being spacecraft, Sheaffer also reintroduces some hard scientific facts that many ET proponents don’t know, or choose to ignore about the overwhelming physical impracticality of interstellar space travel. Even folding or warping space seems out of the realm of possibility, and to make it work, something like magic must be needed. Just how are the visitors getting here? Perhaps believing is the key to seeing. Dr. Steven Greer can lead you through meditation to summon and communicate with ETI spacecraft. Sometimes, you won’t see them at first, but with patience, Greer can teach you how- for a price.

Sheaffer thinks that behind all the UFO stories, there’s nothing but cases of mistaken identity, wishful thinking and fraud. I hope he’s wrong, and that there is a rare, genuine phenomenon, whatever it is. I do agree, however, that the problems he discusses are severe and until UFOtown polices itself, it’ll remain a ghetto- or a ghost town.

Posted by Curt Collins at 3:06 PM No comments:

The Cash-Landrum story is a perplexing case, and a lot of attention is given to Betty Cash's skin problems, which have been mythologized as radiation burns from the UFO. As dramatic as it is, it’s by no means the first instance of UFO “sunburn.” Claims of burns from UFO encounters go way back; some notable early examples are the Sonny Desvergers “Scoutmaster”story, Palm Beach, Florida, 1952, Levelland, Texas, 1957, Loch Raven Dam, Maryland, 1958, and Stefan Michalak, Falcon Lake, 1967.

It didn’t end there, and reports and rumors of UFO burns became a staple in UFO literature. In 1977 movie Close Encounters of the Third Kind introduced the concept to millions, and was highlighted in the scene where Roy Neary shows his wife his burns from a UFO, and insists that it is not a "moonburn." 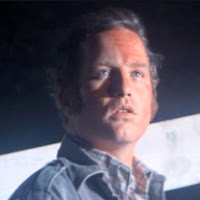 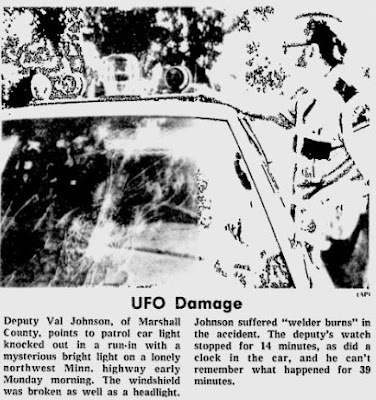 There were other cases shortly before the Cash-Landrum event with UFO burns, some that received nationwide news coverage. The Jerry McAlister UFO sighting on September 11, 1980 has previously been posted here.  His case featured a huge, brilliant UFO that allegedly left the witnesses suffering eye damage and radiation burns.

Before that, a much more famous case featured some details that would be found again in the Cash-Landrum case. On Aug. 27, 1979, Deputy Sheriff Val Johnson was driving  along a lonely road at night, when he saw a blindingly brilliant UFO above the road ahead. Unlike the C-L case, he didn’t stop, and his vehicle collided with the UFO. The car was damaged, and he suffered injuries including “welder’s burns” to his eyes. When help arrived, Johnson was taken to the hospital for an examination and to treat his injuries.  Unlike the C-L case, there was extensive visible damage to his car, and it was preserved as evidence and carefully examined.

There’s another possible connection to the Cash-Landrum case. The popular television show, “That’s Incredible!” debuted in March of 1980 and ran until 1984. It often featured UFO cases, and in its first season they aired a segment on the Val Johnson story. It featured a reenactment of the event, and an appearance by investigator Alan Hendry of the Center for UFO Studies. Johnson was presented as a credible witness, and it showed that his doctor, employer and family stood behind him. 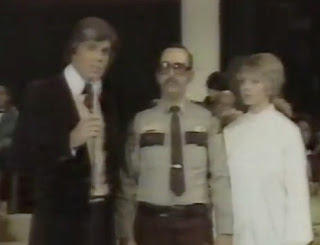 What was strange, though, was that at the end of the segment, host John Davidson asked Johnson a question out of left field.
“Was it a religious experience for you?
Many times these events are a religious experience.”
A strange and seemingly scripted question, perhaps to allow Johnson the opportunity to unburden on the topic. The effect was to suggest that UFO sighings are expected to have a religious element.

Vickie Landrum in particular put emphasis on how she initially took the UFO to be the Second Coming. She said, "The Bible says the sky will split and in a rain of fire, Jesus will come." Could the Cash-Landrum witnesses have been influenced by this program, perhaps in how they reported their story? In 1981, they appeared on “That’s Incredible!” themselves.

The rare segment with Val Johnson on “That’s Incredible!” recently surfaced on YouTube. It’s certainly interesting in and of itself, for the insight into his case it provides, and as a bit of UFO history.


For the full story of the Val Johnson case, see this article by Chris Rutkowski:
The Val Johnson CE2 case of 1979
Posted by Curt Collins at 4:25 PM 1 comment: