“When Betty and Vickie contacted their congressmen, their frustration was heightened. all they received in return was a form letter telling them about the now defunct Air Force project ... and a suggestion they contact a cult group in California.”


The Air Force project is obviously Blue Book, but what is being characterized as a "cult group", and who was the party sending this form letter?


After Project Blue Book closed, the Air Force answered UFO inquiries with a form letter fact sheet and a list of organizations that were investigating aerial phenomenon.
The letter and resources were updated over the years, but here's a copy from around the right time of the Cash-Landrum incident. 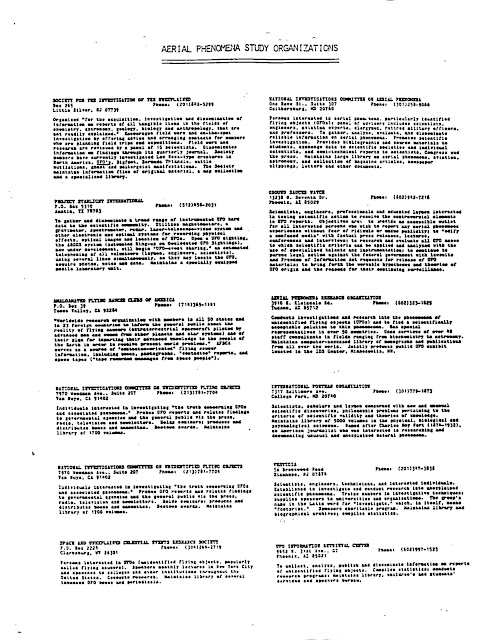 
So the best match for the "cult group" seems to be NICUFO, leaving the question of who sent the form letter. This quote clenches it all:


“Congressman Charles Wilson didn’t reply until July and then all he did was recommend that they contact Ufologist Frank Stranges.”
-The Cash-Landrum UFO Incident  pg. 121

Here's a true rarity. Wendy Connors presents recording of Vickie Landrum's initial UFO incident report to NUFORC (the National UFO Reporting Center). She cleaned it up for audio quality, editing out only address and phone numbers. Here's the original announcement for it:

"Big doings on Strange Days... Indeed - this week. Errol and I will be presenting new audio clips of importance to the field of Ufology....
Later, we'll play Vickie Landrum's first call for assistance to Bob Gribble at NUFORC, about a month after she and Betty Cash became ill from the effects of a UFO they encountered near Dayton, TX. This is the first time this recording has been publicly aired and is unknown to the vast majority of researchers."

The NUFORC recording in a video slideshow on YouTube

Yes sir, this is Vickie Landrum from Dayton, Texas.

Uh, a deal came down and it was like fire was coming from it

It got ahead of us and we had to stop, and we got out of the car,
which I didn’t stay out but just a minute ‘cause I had my
little grandson with me, which I got custody of and I got back in the car.
There was nothing happened to me but my but eyes is burned.
But, but Betty Cash that was with me that night,
knots started coming and she had a real terrible headache.
and so she’s been in Parkview Hospital over two weeks,
I got her out she stayed two weeks and I had to put her back.
And all of her hair has come out.
They can’t find out exactly what is wrong with her, they keep saying
it could be this, or it’s a possibility of that.
But, instead of her getting better, she’s getting worse,
and could it have had anything to do with that thing that we stood and watched,
‘cause we were close enough to it that we felt a fire from it.

RG: How close do you feel you were to that?

Uh, I’d be safe to say it wasn’t more than maybe a block and a half from it.
It lit up the whole element, and I thought that the World was coming to the end, I really did.
I told my grandson not to be afraid, that if he saw something come out
of it, that it would be Jesus.
I thought that way I could explain to him to keep him from going into [unclear]
(a little failure? heart failure? or possibly hysteria?)

RG: Was this a fairly large object?

RG: Would it be larger than your car?

RG: and did it land on the ground?

No sir. It come down almost to the treetops, and then it went back up and went to the right of us.
And we counted 23 helicopters. It might have been more.
Come in on 1960 over here...

We counted those helicopters up there, so there has to be somebody that knew about it.
It was because from that, I don’t want her to die, I want her to get better.

RG: What roadway were you on at the time?

We was on the cut-off road, something called New Caney and Huffman road.
My name’s Vickie Landrum and her name is Betty Cash and she’s in Parkview hospital. Now, one of the doctors believes that we might have got some
radiation, but he is not positive.
He taken her blood and it didn’t show up in any of her blood but, in less than two weeks time she has lost all her hair- except down there at the bottom. And she has- she had hair that you wouldn’t believe.
And I mean this is not a hoax- I’m not calling you for a hoax.
Call the Parkview Hospital and verify what I’m telling you.
I’m not putting you on. I wish somebody would go to the hospital- and see that lady.

RG: We’re going to see if we can’t get some help for you and they’ll call ahead of time and make an appointment.

I- I mean, I- I’ve been afraid to call- afraid that somebody would think I was- you know, that it was a hoax. But since she’s had to go back in the hospital for the same thing and she’s not getting any better.
I have to have help from somewhere, if don’t she’s going to die.

RG: Okay, we’re going to do everything we can to help
Okay, thank you a lot.

(Note; John F. Schuessler dates this call as taking place on Feb. 17, but Vickie makes reference to making more than one long-distance call to NUFORC, so he may have the date of a later call. No recording of any later calls are available.)

Please also see
Vickie Landrum's Phone Call to Report a UFO Encounter
for more details on this call and a video slideshow of  Vickie's call.

Posted by Curt Collins at 7:50 AM No comments:

This map shows the location of the Cash-Landrum UFO sighting, subsequent viewing locations, and the placement of alleged secondary witnesses. Some placements are speculative and are subject to correction.
(Corrections and notations last made 11/9/16)

See larger version for details.
Compare it with vintage aerial map linked below.

Compare the marked map above with this vintage aerial map:

Aerial Map of Cash-Landrum sighting location from 1981
Select "show all roads" from the choice of overlays.


A big thanks to DPD11 for this vintage map!
Posted by Curt Collins at 12:43 PM No comments: