The new blog, The Saucers That Time Forgot  presents "the cases that UFO historians either missed, or would like to keep buried." This piece was originally written for STTF, but since it's not exactly about a saucer case, and is more about UFO history, culture and the media, it's appearing here at BBL. 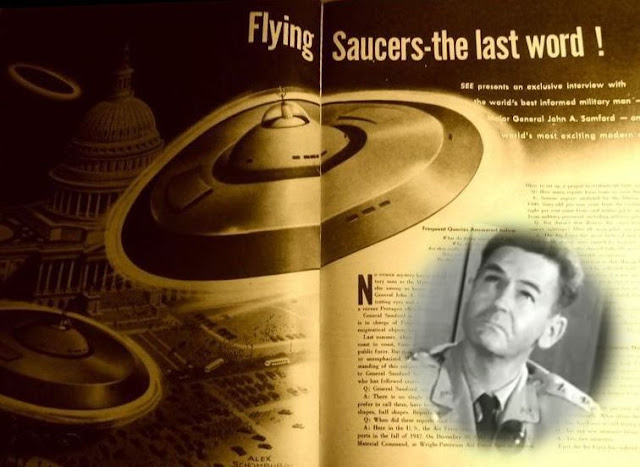 
Most people know the Air Force's Major General John A. Samford from his historic July 29, 1952 press conference given after the Washington, D.C. radar incidents, where he talked about the small but troubling percentage of UFO reports "from credible observers of relatively incredible things." Captain Edward Ruppelt in the notes made in preparation for his 1956 book, The Report on Unidentified Flying Objects,  described Gen. Samford in his entries on the key figures involved in the Air Force's Project Blue Book:

General Samford never committed himself one way or the other on the subject of UFO’s. He was always very much interested and gave me the utmost in cooperation, but he never said much. He used to ask many of the other people at meetings what they thought and there were a lot of “pro” answers but he never agreed or disagreed with anyone. The only time that I ever heard him say anything was when Col Porter got real nasty about the whole thing one day and began to knock ATIC, UFO’s, me and everything associated with the project. Then the General said something to the effect that as far as he could see, I was the first person in the history of the Air Force’s investigation that had taken a serious approach to the investigation and that he didn’t see how anyone could decide until I’d collected more data.

At the present time the General is the one who is so rabid on the fact that nothing will be released. He got “burned” real bad on the press conference in July 1952. His statements were twisted around and newsreel shots of him were “cut and pieced” to get him saying things that he didn’t. He wanted to play along with the writers but they misquoted him so badly that now he is saying absolutely nothing. Donald Keyhoe keeps writing about the “silence group” in the Air Force, those who want to clamp down on UFO news.  Gen Samford is the silence group and friend Keyhoe can take all of the credit for making him that way.

See was a bi-monthly magazine, sort of a more sensational version of Life, but featuring a heavier emphasis on entertainment. See's covers featured beautiful buxom women, making it look more like a girlie pin-up magazine, but they did cover news and current events. In their last issue for 1952 See made news for its coverage of the flying saucer controversy in an exclusive interview with General Samford of the USAF.

(Full text below)
Here's a partial transcript of the See magazine article itself: 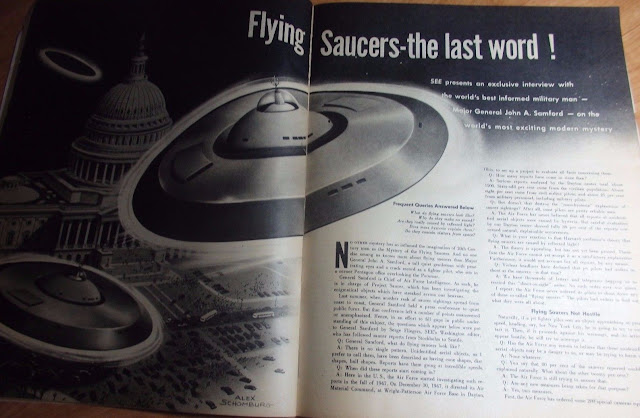 Frequent Queries Answered Below
What do flying saucers look like?
Why did they make no sound?
Are they really caused by reflected light?
Does mass hysteria explain them?
Do they contain visitors from space?

No other mystery has so inflamed the imagination of The 20th century man as the Mystery of the Flying Saucers. And no one else among us knows more about the flying saucer stand Major General John A. Samford, a tall quiet gentleman with penetrating eyes and a crack record as a fighter pilot, who sits in a corner Pentagon office overlooking the Potomac. General Samford is Chief of Air Force Intelligence. As such, he is head of Project Saucer, which has been investigating the enigmatical objects which have streaked across our heavens.

Last summer, when another rash of saucer sightings spread from coast to coast, General Samford how they press conference to quiet public furor. But that conference left a number of points on answered or unemphasized. Hence, in an effort to fill the gaps in public understanding of the subject, the questions which appear below were put to General Samford by Serge Fliegers SEE's Washington editor, who has followed saucer report from Stockholm to Seattle.
Q: General Samford, what do flying saucers look like?
A: There is no single pattern. Unidentified aerial objects, as I prefer to call them, have been described as having cone shapes, disc shapes, ball shapes. Reports have them going and incredible speeds.

Q: When did the reports start coming in?
A: Here in the U.S., the Air Force started investigating such reports in the fall of 1947. On December 30, 1947, it directed its Air Force Material Command, at Wright-Patterson Air Force Base in Dayton, Ohio to set up a project to evaluate all facts concerning them.

Q: How many reports of come in since then?A: Serious reports analyzed by Dayton center total about 1500. Sixty-odd percent come from the civilian population. About eight per cent come from civil airline pilots, and about twenty-five per cent from military personnel, including military pilots.
Q: But doesn't that destroyed the "mass hysteria" explanation of saucer signings? After all, most pilots are pretty reliable man.
A: The Air Force has never believed that all reports on unidentified aerial objects are caused by hysteria. But careful evaluation by our Dayton center showed fully 80 per cent of the reports concerned natural, explainable occurrences.

Q: What is your reaction to that Harvard professor's (Dr. Donald Menzel) theory that flying saucers are caused by reflected light?
A: The theory is appealing, but has not yet been proved. Therefore the Air Force cannot yet accept it as a satisfactory explanation. Furthermore, it would not account for all reports, by any means.

Q: Violent headlines have declared that jet pilots had orders to shoot at the saucers. Is that true?
A: We have thousands of letters and telegrams begging us to resend this "shoot on sight "order. No such order ever was given. I repeat, the Air Force never ordered it to pilots to shoot down any of these so-called "flying saucers." The pilots had orders to find and find out what they were all about.

Flying Saucers Not Hostile
Naturally, if a jet fighter pilot sees an object approaching at great unknown speed,  heading, say, for New York City, he is going to try to contact it. Then, if it proceed against his warnings and its actions appear hostile, he will try to intercept it.

Q: Has the Air Force any reason to believe that these unidentified aerial objects may be a danger to us, or may be trying to harm us?A: None whatsoever.

Q: You say that 80% of the sources reported could be explain naturally. What about the other twenty per cent?
A: The Air Force is still trying to answer that.

"As limited as man is in his knowledge and understanding of the universe and its many forces, it would be foolhardy indeed to deny the possibility that higher forms of life existed elsewhere.

It would be similarly unreasonable to deny that intelligent beings from some other world were able to visit our planet, at least to travel within our atmosphere.

"However, the Air Force desires to reiterate emphatically that there is absolutely no evidence to indicate that this possibility has been translated into reality."

According to Donald Keyhoe's Flying Saucers from Outer Space, the See interview was a fake:

"I saw the AP story on it," I said. "But the Air Force is a little sore about that article. (Al) Chop told me they didn't interview General Samford directly—it was supposed to be labeled a hypothetical interview based on public statements he'd made."

"Serge Fliegers See's Washington editor..." was best known as a European correspondent for Hearst newspapers. A mini bio of him appeared in The Freeman magazine, April 1953:


Serge Fliegers was brought up in Switzerland, educated at Cambridge and Harvard. As a correspondent he has traveled in Europe, the Middle East, Latin America, speaks eight languages, including Arabic. Between covering the United Nations for the Inter Continental Press and writing magazine articles, he manages to find time for his special interest- opera and instrumental music.

In 1964, Fliegers' name came up during the Warren Commission's investigation into the assassination of President John F. Kennedy. Word got to them that Fliegers claimed that an anti-Khrushchev, pro-Chinese group in the Soviet Union had trained Lee Harvey Oswald to assassinate the President. Investigating the credibility of Fliegers and his sources, investigators contacted Dan Brigham, an editor of the New York Journal American newspaper. Brigham was able to give them Fliegers' location for questioning, and reported that Fliegers was "one of the biggest fakers in the business and anything he says has to be taken with a large grain of salt."

Was the See interview an example of what Ed Ruppelt was saying, that Gen. Samford's comments were "cut and pieced” to get him "saying things that he didn’t?" Samford's statements were similar to his remarks from the July 29, 1952 press conference on the Washington, D.C. UFO radar incidents.

If the See "interview" had it's origin there, great dramatic license was taken with Samford's words. Maybe after getting burned by Serge Fliegers in See, Gen. Samford set an example for the Air Force, setting the policy that the best way to handle the press on the UFO topic was silence, "saying absolutely nothing."


Thanks to The Saucers That Time Forgot's Yvan Defoy for the lead on this article, and to Jan Aldrich for additional details on the AF press release refuting the See article.

The man-made moons comment int the See story was referring to data discussed in this story from Mechanix Illustrated, Apr, 1949 :


Secretary James Forrestal disclosed recently that his department is working on a “satellite base” to revolve around the world like a miniature moon, as a military outpost in space.
“The earth-satellite vehicle program, which is being carried out independently by each military service, was assigned to the committee on guided missiles for coordination,” he revealed in his first annual report on the national military establishment.

Posted by Curt Collins at 9:21 AM No comments: