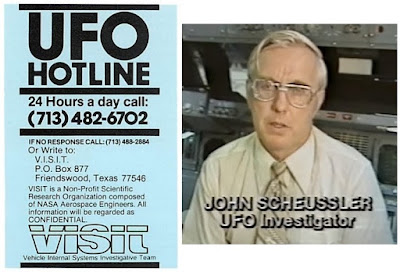 "Luck is where the crossroads of opportunity and preparation meet." - Seneca

The group seems to have been founded on the principle that UFOs were structured craft of extraterrestrial origin, and they sought to apply their collective expertise to understanding the vehicles, their occupants, and also any physical effects produced by encountering them.

Project VISIT hosted the 1980 MUFON Symposium, where Dr. Niemtzow* gave a presentation based on the article below. 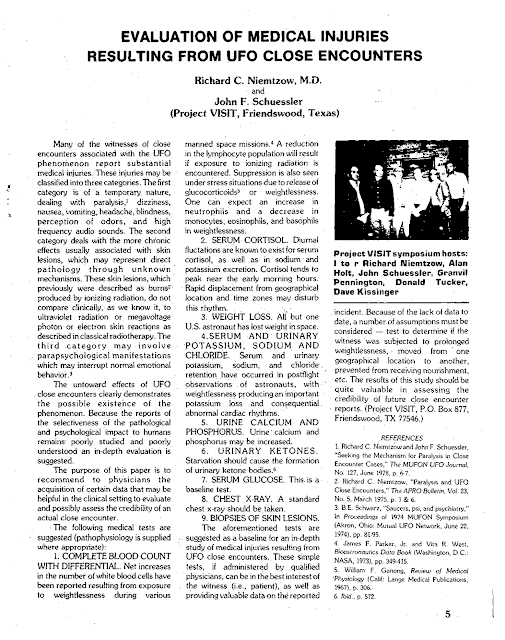 Project VISIT was primed to investigate an encounter of an extraterrestrial craft causing radiation injuries on witnesses, and all they needed was a fresh case to examine. On December 29, 1980, one occurred virtually in their back yard, less than 20 miles from Houston. Unfortunately, they didn't know about it.

Two months later, a reporter gave one of the witnesses a phone number. That phone call began the Cash-Landrum investigation by John Schuessler and Project VISIT.


For more background, see "Project VISIT - An Approach To Determine What Are They?" by  L. David Kissinger and John F. Schuessler in  MUFON Journal July 1980,

* In the months between the MUFON Symposium and the beginning of the case, VISIT's resident Radiologist, Dr. Niemtzow moved away from the area and joined the Air Force as a physician. VISIT members felt he could not be trusted due to his association with the Air Force. They denied him access to case records and he was unable to participate in their investigation.


P.S. After taking the Cash-Landrum case, VISIT decided that it would be better if they were easier for witnesses to locate. They started circulating these cards:

Posted by Curt Collins at 5:00 PM No comments: