Flaming UFO: An Examination of the Cash-Landrum Original Testimony

UFO Fire: Flames or Glow? Separating the Heat from the Light


“In addition to lighting the whole area like daytime, the UFO periodically belched flames downward. Each time the object would shoot flames downward it would rise. As the flames stopped it would drop in altitude. The intense glow, however, never changed.”
-John Schuessler, MUFON Journal November 1981

Whatever it was, one thing that seemed definite about the Cash-Landrum UFO is that it "belched flames downward." When investigator Chris Lambright shared the transcript from his 1985 interview with witnesses Vickie Landrum and Betty Cash, it became apparent that there were problems with the details circulating about the UFO's description and characteristics. Examination of the case documents shows that there is much confusion in separating the UFO itself from the light, and the flame-like effects it produced. When Colby Landrum appeared on Martin Willis’ Podcast UFO, he was questioned on specific details about the object:


“To me, it was like a diamond shape with flames coming out the bottom, not just massive flames, the whole thing looked [like it] radiated bright orange and it actually looked like it was more glowing than on fire. As a kid, that seems to stick in your head... a lot of things I don’t remember, but this particular thing about the object I do remember.”
Colby Landrum, Podcast UFO, Dec. 4, 2013

Identifying this pyrotechnic characteristic could prove to be a vital clue in either identifying or eliminating a terrestrial craft as a suspect for the UFO. This prompted me to review the records, with emphasis on the earliest reports with direct statements from the witnesses. What did the witnesses originally say about the fire, and did it change over time? 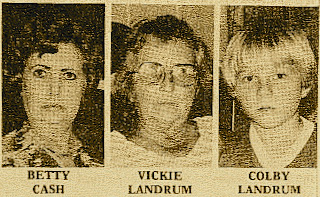 “a deal came down and it was like fire was coming from it.” (Referring to Betty’s illness) “...could it have had anything to do with that thing that we stood and watched, ‘cause we were close enough to it that we felt a fire from it."
VL’s call to Robert Gribble at NUFORC Feb. 2, 1981

“It was bright, the lights were bright. And there was a lot of heat coming from this object.”  (No mention of fires or flame.)
BC - Parkway Hospital Tape Early Feb. 1981

"The whole road ahead and around it glowing as if by fire. I believe it was fire because it glowed down and let up a little."
VL- Parkway Hospital Tape Early Feb. 1981

“this bright object that made the sky just split up & it looked like the world was coming to an end, it was a very bright red.”
BC’s handwritten account of the encounter, Parkway Hospital, Feb. 7, 1981

There is a gap in the record from February 8th until the 21st. During this time, the case was being managed by Bill English (a rogue member of APRO), who sold the story to the tabloid Weekly World News, providing them with Betty's and Vickie's taped statements from Parkway Hospital. 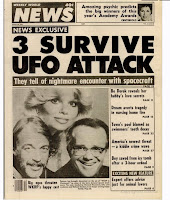 To date, no records of the conversations between the witnesses and English or the tabloid have surfaced. It was during the tabloid involvement that the definite descriptions of fire begin to appear.

"It looked like the whole sky had split and fire was coming down almost to the road.”
VL- Weekly World News March 24, 1981

"this fire was coming out of the bottom of it. And it wasn't just one little streak.''
VL- Feb. 28, 1981 interview, The Cash-Landrum UFO Incident by J.F. Schuessler

“a bright silver... an aluminous thing. It was diamond-shaped with fire coming out of the bottom,” flames produced “air brakes” sound, but louder. Asked if flames were like a rocket, “That’s the way it was, but it didn’t fly off.” No smoke was noticed. Flames produced a roar compared to tornado, big winds, big engine, “air brakes” sound, but louder.
BC- 1981 undated interview, The Cash-Landrum UFO Incident by J.F. Schuessler


1985 Interviews of the Witnesses

July 10, 1985, Chris Lambright interviewed Vickie Landrum in her Dayton home, seeking further details. He tried to determine when and from where the object emitted the glowing light.


CPL: Were the flames coming down all the time?

VL: No, no. They would let up and then come back down.

CPL: How could you see it if the flame went out?

VL: It didn’t go completely out. It went up and then it would come back down. It was like something, like a motor or something that was in trouble. And finally, when the flame come whooshing down, there was a loud noise…the loud noise it made…it lifted slowly.

CPL: Was the flame more or less constant, or did it just cease?

VL: It never did just completely cease. It was permanently…It was just a big light. It was glowing over the road so much we saw the object.

Two days later, Lambright followed up by talking to Betty Cash by telephone.


CPL: When the light came out, it came out only from the bottom?

BC: That is right.

Lambright asked for clarification on the color and characteristics of the light.


BC: I have described it on several occasions myself as a blow torch light. You know, a welding light…they don’t all come out one color…you can look at them and they are different colors.

CPL: Are you talking about an arc-welder?

BC: Well, one of them welding torches that shoots flames out. A propane torch.

BC: Yes, and if you will look you can see the yellow and white…you know.

CPL: Did you notice anything about the flame itself that would have made it look very red, so you would have described it as red?

BC: Well…not really as a red. But there was a reddish-yellowish looking color.

As a boy, Colby Landrum was rarely quoted at length in the press coverage, and he later withdrew, refusing to discuss the events. In his first television appearance as an adult, he described the object.

”It was a bright red, glowing object. Kind of looked as if you took a piece of metal and heated it up with a torch. It kind of looked like it was on fire, but it was kind of floating.”
Colby Landrum, UFO Hunters, “Alien Fallout” aired January 14, 2009

Betty Cash, who witnessed the encounter the most closely, did not mention fire or flames in the earliest two reports, just heat and light. Vickie Landrum initially said the object produced heat and was glowing as if by fire  As they were asked to repeat their story, it appears the glow and the heat may have combined into a description of “flames.” Admittedly, it’s a bit unclear and confusing, as are many details reported in the case. Often, eyewitness testimony can become unintentionally contaminated by external influences or just grow in the retelling.

In the interview at Bergstrom Air Force Base, Vickie and Betty included details of John Schuessler's investigation in their description of events, such as the measurements of the UFO's position and size. Colby was the only witness who could originally describe a shape for the object, Schuessler emphasized the diamond shape in his initial report. The witnesses absorbed the report, and this new information was incorporated into their story.

In examining the original testimony, the witnesses reported seeing the brilliant light and feeling heat produced by the unidentified flying object. The more dramatic description of fire and flames may have been a later interpretation.