In the piece, The Miracle of Fatima: Photographic Proof from the Vatican and LIFE magazine?,
we saw how a photo was erroneously presented as evidence. What was not discussed was how an error of that magnitude came to be. Luckily others knew where to look for answers.

Gilles Fernandez, is a scholarlly French skeptic s that corresponds with me, and he was very helpful in tracking down further details on the origin of the Fatima photo fiasco.  Gilles contacted Marc Hallet, who has an excellent history of the Fatima Miracle itself at his French language site.


Marc provided  a copy  of the "picture" from the first book it was in, by Vicomte de Montelo, (circa 1930) who described the picture as "Le phénomène solaire, 2°aspect" (the solar phenomenon, second aspect).

The book was
As Grandes Maravilhas de Fatima by Canon Manuel Nunes Formigão under the pseudonym “Vicomte de Montelo” Uniao grafica, 1927 (Note: Some references use the spelling "Montello," preserved here.)


It must have been forgotten, because when about twenty years later finding copies of the photograph launched international news:

Gilles was kind enough to translate the relevant passage:

What happened? In December 1957, in the Portuguese Jesuit review “Broteria “, Professor Agostinho Veloso s.j., explains the origin of this lamentable error:
“The Chief of the Protocol of Portugal Foreign Ministry, Doctor João Mendonça found in the house of his parents four negatives that his brother Alfredo, already dead, had photographed. He thought that they were from Fatima and, the respective positives were published in one book of Dr. Formigao, under the pseudonym of “Vicomte de Montello".

“When Cardinal Tedeschini came to Portugal, again with the same good faith, Dr. Mendonça gave him enlargements of these pictures, as photographed at noon/midday, 13 October 1917. After, the “Osservatore Romano” published them, also in good faith”.

“However, the author of this notice [Veloso] had had the occasion to make some research and he verified that the pictures were not photographed at Fatima, nor at 13 October 1917, but in Torres Novas, 5P.M., 13 June 1925. Coming from Fatima, and he saw an astronomical phenomenon that he believed to be a repetition of the Fatima Miracle […], Alfredo Mendonça photographed it. Later, he died. And his family, discovering later the negatives, were mistaken concerning the date and place, and it is how the error was spread.”

This benevolent explanation, accepting without discussion the justification provided by those first responsible of this lamentable affair is maybe not the most plausible. Because the of the incredible carelessness of Dr. João Mendonça, granting by writing the authenticity of the pictures, without any serious evidence and without research nor verification, is for us very suspect. And the behavior how the anticlerical medias and Franc-Maçons – and “Le Monde “ newspaper the first one – was advised of the deception only several months after the publication of the pictures by “Osservatore Romana” is not less suspicious. If Dr. Mendoça was able to discover that the photographs he offered to the Cardinal Tedeschini, as authentic photographs of 13 October 1917 Miracle, were in reality photographed at 5 PM, 13 June 1925, in Torres Novas – what precision! - how can he have ignored it before? And how is it that opponents of the church were the first to know?

When we know how the Bourgeoisie of Portugal remained in great part liberal, skeptic, anticlerical and secretly affiliated to the Freemasons, another hypothesis, less benevolent, but likely has come to our mind: A trap, a deliberate deception whose victim was Cardinal Tedseschini, and following him, Osservatore Romano”.

In Marc Hallet's book, Les Apparitions de la Vierge, he attempts to clarify things. Below is a mechanically transited passage.

In 1931, in the key work he devoted to the apparitions of Fatima under the pseudonym Viscount Montello, Canon Formigao published without too many comments three poor quality photographs purportedly showing the three phases of the solar miracle. These illustrations went long unnoticed until they resurfaced, November 18, 1951, in the Osservatore Romano where they were presented as photographs "absolutely authentic."  Meanwhile, in 1944, in the book he devoted to Fatima, Jesuit H. Jongen had already written, but without providing any evidence, that the solar miracle had actually been photographed. November 21, 1951, following the article from the Osservatore Romano, the Parisian newspaper Le Monde claimed that the photographs were false and the press organ of the Vatican soon issued a denial of them. On March 14, the Osservatore Romano belies the words in the French daily, and reaffirmed that the published material came from a trusted source. Careful, however, he added that even if they were found to be false, this does not belie the miracle of 1917 occurred " in front of tens of thousands of witnesses."

On 15 March, returning to this case, Le Monde wrote that Osservatore Romano admitted the possibility that these documents were false. It was not until December 1957 to find the key to the riddle. It was published in the journal of the Portuguese Jesuit. The Chief of Protocol of the Ministry of Foreign Affairs of Portugal found four negatives taken by his late brother Alberto. As they were published in the book of Canon Formigao, he thought they had been taken at Fatima.  When the Portuguese Cardinal Tedeschini came, he offered enlargements of these photographs in good faith. And so they found themselves in the Osservatore Romano with the estimate  of a "reliable source." In fact, the pictures were taken on June 13 1925 17h at Torres Novas, while Alberto observed meteorological phenomenon that seemed to replicate the miracle of Fatima. Such, at least, now is the official theory (though little known) which obviously does not satisfy everyone. Another hypothesis is that there was a conspiracy to undermine the credibility of the Vatican. And here would not have been a coincidence, of course, if the enemies of the Church (it is here Le Monde) were aware of the fraud even before the Vatican.


I'll leave the conspiracy hypothesis alone, and focus on the historical information. The basic idea of seeing something like the photographs, and attaching significance to based on cherished notions has plenty of precedents and antecedents. When there is a will to believe, miracles will be found. 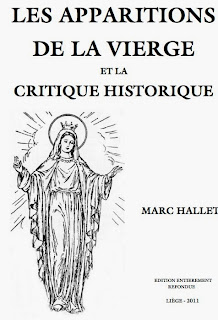 Marc Hallet's book (The Apparitions of the Virgin) at Scribd:

Thanks again to Gilles Fernandez and Marc Hallet for their contributions!