Since the very beginning, rumors swirled around the Cash-Landrum case. An early one was about the Government quietly paying medical expenses for the witnesses, and a later one claimed the USG offered to settle with them out of court. 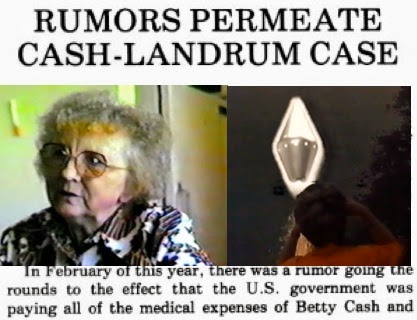 “In February of this year, there was a rumor going the rounds to the effect that the U.S. government was paying all of the medical expenses of Betty Cash and Vicki Landrum, two of the three principals in the ‘Cash-Landrum’ case of December 29, 1980. ...After hearing the rumor, APRO checked with Mrs. Landrum by telephone and she confirmed our initial suspicion that the information was an unfounded rumor.” Rumors Permeate Cash-Landrum Case APRO Bulletin Vol. 30 #6 June 1982

The APRO article was correct, but  reporting the rumor also helped spread it further.


In Project Beta by Greg Bishop,  2005,  he provides a brief summary of  the Cash-Landrum UFO case, discussing it primarily in terms of how Paul Bennewitz perceived that it was connected to an alleged U.S. cover-up of an alliance with space aliens. Of the C-L court case, he says,

Early in the legal battle, the Air Force quietly offered to pay medical expenses if Cash and the Landrums agreed to sign a nondisclosure form promising not to discuss the case anymore. Their lawyer, Citizens Against UFO Secrecy president Peter Gersten, advised them against this, and tried to fight the Air Force to disclose the existence of the craft. When it became clear that the case was going nowhere, Cash and Landrum decided to accept the original deal, but the Air Force reply was a cold and confusing “What deal?”
Project Beta pg.170

Greg’s otherwise excellent book seems off the mark on this one point. I'd suggest that his sources mislead him in this instance with some inaccurate information. Primary sources in the case are very difficult to obtain, and almost all information on the C-L case is second-hand.


The gate-keeper of the case, John F. Schuessler in his book, The Cash-Landrum UFO Incident (1998) devotes pages 187 to 223 to the legal case in great detail. The thrust of Schuessler's book is that the witnesses are victims of a government cover-up, but there is no mention of an out of court settlement with the government.

In September 1985, UFO researcher Chris Lambright had a far-ranging conversation on the case with Vickie Landrum in her home. While it was not a formal interview, he videotaped it, but unfortunately the audio quality is poor due to excessive background noise.  Chris shared a copy of this unique  recording with me. In it, Vickie talks about her many frustrations about the case at length, but makes no mention of being offered and denied a deal, but the subject of a settlement does come up.

Lambright asks Vickie about their legal battle, and if she would settle out of court. Vickie says she wants to get the best care for all of them, but to not let America know about what really happened would be a disappointment. Accepting a settlement would be a hard decision, and she felt to do so would “let American people down.” She really seemed to want a public court hearing, in part for the "people who stood by me."

If there had been a settlement offer that had been retracted, Vickie would have mentioned it.

Damage claim forms against the Air Force were picked up in Aug. 1981, but not filed by Peter Gersten until near the 2nd anniversary of the case on Dec. 1982. The claim was denied in May 1983. (Appealed, denied again.)

In January 1984, Civil Suit against the U.S. Government,  H-84-348 was filed,  followed by much contention and publicity.


The August 1985 MUFON Journal reported that Peter Gersten stated that chances of his winning the case in court were "slim and none.”

The case was finally dismissed without going to trial  August 21,1986. This was due in part to sworn statements by military branch representatives that the U.S. did not own or operate a vehicle like the UFO described.

There were some strange turns in the legal case, but that’s a much longer story for another time.
Posted by Curt Collins at 2:07 PM