Neither were little green men. That was an old phrase used to describe the wee folk way before saucers, and if someone was seeing the LGM, chances were good they had a screw loose.
These little men were not necessarily green, but these tales started circulating thanks to Silas Newton's Aztec saucer crash story in 1949. This cartoon is by John Carlton from April 2, 1950 and was syndicated nationally by the Associated Press. A good look at how the public felt about the AF's handling of the saucer situation, and how the whole topic was silly. 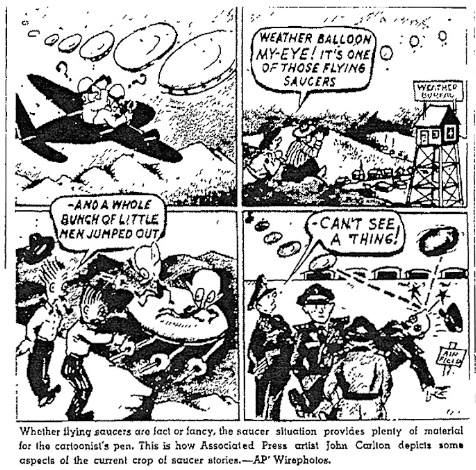 Long before 1947, people tended to doubt the word of witnesses reporting weird things, and ridicule was a frequent response. Here are some examples from the heyday of the Sea Serpent era.
.

No, ridicule of strange sightings was not invented for UFOs.
A cartoon from the Aug. 30, 1914 Reading Eagle.

Q "What has become of the sea serpent that used to show up every summer?" A: "They had to chase him off the coast. He caused so many men to take the (sobriety) pledge that he was killing business for the bar."

Another example, an even older one from The Toronto Daily Mail, September 8, 1885!


Unfortunately, ridicule and disbelief are part of human nature. It's certainly not of anti-Disclosure UFO disinformation scheme. That would be silly.