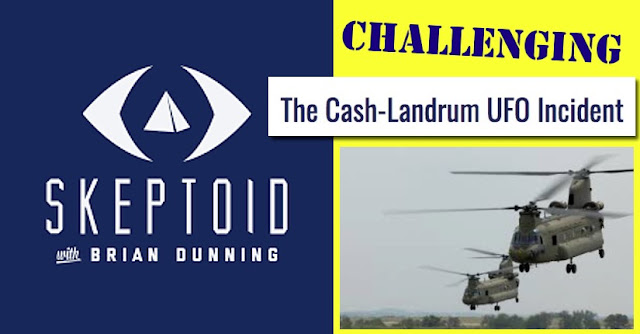 On December 4, 2018 Brian Dunning presented an episode of the Skeptoid Podcast,  The Cash-Landrum UFO Incident, a skeptical evaluation of the case. Dunning does a fair job of examining the case, and he’s clearly done a lot of reading on the case. The printed version of his program includes a list of Dunning’s sources, which includes documents hosted at Blue Blurry Lines.

Brian Dunning reaches the conclusion that the medical problems reported by the witnesses were not due to radiation poisoning from a UFO, and he suggests the witnesses were made some false or exaggerated claims. He also charges the primary UFO investigator of the case, John Schuessler, with cherrypicking data presented as evidence, saying he included “the bits of reports that supported his thesis... and ignored the bits of reports that did not...” Dunning’s argument is worthy of an examination, and a response.

Dunning’s summary of the sighting by Betty Cash, Vickie and Colby Landrum itself is good, as it reflects how the case initially presented. He stumbles a bit when describing how the witnesses reported the case, but that’s understandable. It’s an interesting detail, and the delay in the start of the investigation may be the reason behind why evidence and answers are so elusive in the C-L case. A short summary of how it began:

Betty Cash and Vickie Landrum said they didn’t immediately connect their illness with the UFO, and were afraid of being called crazy, so they didn’t report their sighting.  At the end of January 1981, once the UFO story had been revealed to Betty’s doctors, Vickie Landrum reported the story to her neighbor, Dayton Police Chief Tommy Waring. It took Waring two or three days to locate the number for the the National UFO Reporting Center (NUFORC) in Seattle, Washington. Vickie reported the sighting on Feb. 2 to Robert Gribble, who passed the information on to UFO organizations, but problems arose, and it was several weeks before an investigation began. John Schuessler, then the deputy director of the Mutual UFO Network, also ran a Houston-area group, Project VISIT (for Vehicle Internal Systems Investigative Team). Schuessler began investigating the Cash-Landrum case on Feb. 21, 1981 after getting a call from Betty Cash, then by visiting the sighting location a week later with Vickie and Colby Landrum.

Dunning next discusses the alleged radiation injuries, and talks about how Dr. Gary Posner had seen the C-L case presented on the 1981 episode of NBC’s That's Incredible!
where “Betty's arms [showed] discrete, round, sunburn-type rashes...” Dunning says Schuessler never mentioned these particular injuries in his book, but that’s not unique. Betty Cash’s alleged radiation burn to her finger beneath her wedding ring was not mentioned by Schuessler in the book, and not in the hospital reports reproduced there or anywhere else. Dunning’s right though, about the hospital diagnosis. While Betty’s combination of symptoms did seem to puzzle her cardiologist and the Parkway Hospital doctors, the diagnosis was of earthly ailments.
See the BBL report, Betty Cash’s Medical Records for further details.

Dunning also mentions Vickie Landrum’s complaints, and notes that her hair and fingernail loss were not documented with photographs. That’s true. There are drawings of Vickie’s fingernails, but no photos, and the pictures of her closest to the incident do not reflect significant hair loss.

I think it is important to assure Betty that on the basis of the medical information you have provided me, that there are no signs of serious injury to date. You may also reassure Vicki that her cataract was probably a pre-existing condition and not necessarily related to her incident.

Dunning’s use of the quote by Dr. Rank is damning, but it cuts both ways. Yes, Dr. Rank was a radiologist, and Schuessler’s primary source supporting radiation burns in the case. However, Dr. Rank only examined Betty Cash’s medical records and looked at photos of the witnesses, he never conducted a physical examination of Betty Cash, or of Vickie and Colby Landrum.

Rank, P. "Personal correspondence to John Schuessler." The Cash-Landrum UFO Case Document Collection. Blue Blurry Lines, 29 Apr. 1981. Web. 29 Nov. 2018. https://app.box.com/s/zvelar3gubgiee5zwgi3
Dunning discusses Betty Cash telling the Air Force that the helicopters she had seen carried military markings, while in earlier interviews she said she had seen none. When interviewed as Bergstrom AFB on August 17, 1981, Betty was asked to draw a picture of the UFO, and write out the markings she claimed to see on the helicopters. She printed the words, "United States Air Force." Interestingly, the Bergstrom interview is downplayed by Schuessler, and only mentioned in a negative way, that the witnesses were treated unkindly and mocked. The transcript of the interview does not reflect that, and instead has value as direct testimony from all three of the witnesses away from UFO investigators.

Dunning does not try to tackle the issue of the UFO itself (or the associated helicopters), and I can’t fault him too much for that. In fact, he was a bit too soft. Despite the claims that the sighting occurred in a remote area, it was by no means unpopulated. There was at least one trailer home nearby, and there were other homes down the road in both directions. After the initial sighting, the witnesses drove by a fishing camp, a church, then thorough Huffman, and claimed to be able to see the UFO and helicopters from several points along the way. With the sights and sounds they claimed, it’s difficult to understand how many more people were not alarmed.

In his conclusion, Dunning seems sympathetic to the witnesses, and allows that they may have indeed seen something that night, but does to believe it to have been extraordinary, just another of many sincere, but mistaken reports of UFOs. It’s his opinion that they wrongly connected their health problems with the experience, and sincerely believing they were wronged, exaggerated their story. And he includes the possibility they went further, such as faking sunburn from the UFO.

It could be. Having a UFO terrifying experience could have been so stressful that it worsened existing health problems in the witnesses. If we want to examine a hoax scenario, a more plausible scenario might be that Betty Cash was genuinely ill and that Vickie Landrum faked her injuries in order to support her friend and try to get her help, including financial support. Betty Cash was a cardiac patient, she’d had surgery a few years before and was taking several medical prescriptions to manage her health. She’d recently been divorced, and as she told the officers in the Bergstrom interview, her business had failed and was closed. Before the UFO, Betty Cash was going through a very rough patch.

Brian Dunning noted that “Most of what's known about this story stems from the efforts of John Schuessler,” and that’s been the cases’ biggest asset and liability. Schuessler campaigned to get the story covered by the media and supported the legal case suing the US government for damages related to its alleged involvement in the UFO incident. Due to Schuessler’s role as the gatekeeper of the case, he shaped the information released and took a central role in how newspapers and television shows portrayed the story. It caused a simplified, one-sided version of the story to be told one with heroes and villains, the witnesses as poor victims, the government as the evil keeper of secrets, and the valiant UFO researcher bravely fighting for justice. As Dunning says, “a legend.”

The documents presented here at Blue Blurry Lines are intended to strip away the mythology of the Cash-Landrum case and allow for an unbiased examination of the events. We may never know exactly what happened, but we can at least get closer to the truth.