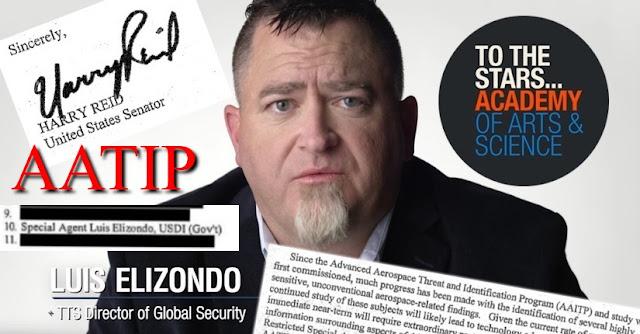 When To The Stars Academy of Arts and Science burst on the scene, the feather in it's cap was the revelation that the US government had a secret UFO investigation, and that the program's former director was now a key member in their company, TTSA.

The news was really made by the article in the  New York Times from Dec. 16, 2017, by Helene Cooper, Ralph Blumenthal and Leslie Kean. Luis Elizondo was presented as the former director of the Advanced Aerospace Threat Identification Program (AATIP). It was revealed that Senator Harry Reid was the architect of AATIP's creation, and it referred to a letter by him that had been presented to journalists to establish the bona fides of AATIP and Elizondo.


By 2009, Mr. Reid decided that the program had made such extraordinary discoveries that he argued for heightened security to protect it. “Much progress has been made with the identification of several highly sensitive, unconventional aerospace-related findings,” Mr. Reid said in a letter to William Lynn III, a deputy defense secretary at the time, requesting that it be designated a “restricted special access program” limited to a few listed officials.

Senator Reid's letter proposed the establishment of AATIP as a Special Access Program (SAP) with black budget funding. It was dated June 24, 2009, and addressed to "Honorable William Lynn III, Deputy Secretary of Defense." The effort was unsuccessful, and AATIP remained a small, part-time project. As Jeremy Kenyon Lockyer Corbell, a UFO and paranormal documentary film journalist, described it, “AATIP was more of an assignment than a program."

George Knapp, KLAS-TV news reporter and TTSA proponent, published a copy of the Reid letter on July 25, 2018, in the article Exclusive: I-Team obtains some key documents related to Pentagon UFO study, however, Knapp redacted some of the players' names, supposedly to protect the identities of the persons involved. 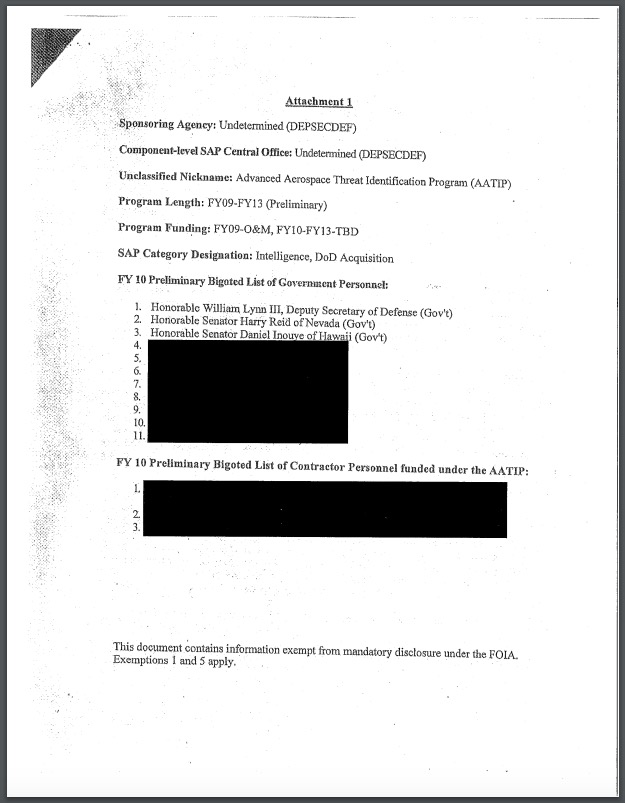 
“Mr. Elizondo had no responsibilities with regard to the AATIP program while he worked in OUSDI [the Office of Under Secretary of Defense for Intelligence], up until the time he resigned effective 10/4/2017.”

Elizondo's supporters insisted the Pentagon statement by Sherwood was deceitful or incorrect, and cited the Dec. 16, 2017, Politico story by Bryan Bender that stated:


Pentagon spokeswoman Dana White confirmed to POLITICO that the program existed and was run by Elizondo. But she could not say how long he was in charge of it and declined to answer detailed questions about the office or its work, citing concerns about the closely held nature of the program.

Bender did not provide a direct quote from White, and she's no longer in that job, therefore in no position to provide clarification. For the record, there was another attempt to verify Elizondo's AATIP role at the time. Sarah Scoles of Wired repeatedly questioned Pentagon spokesperson Audricia Harris about  AATIP matters. From her Feb. 17, 2019 article, “What Is Up With Those Pentagon UFO Videos?”


"WIRED was unable to verify that Elizondo worked on AATIP, but Harris does confirm that he worked for the Defense Department."

Before the flap raised about Elizondo by the Intercept article was started, researcher Roger Glassel was pursuing verification on something different, a sensational AATIP-related story in a tabloid. The May 22, 2019, New York Post, contained partial quotes from a Pentagon spokesperson, and on June 4, Glassel obtained the complete original Pentagon statement it was based on. What Glassel received contained an identical statement about Elizondo from the Pentagon's Christopher Sherwood, showing the NY Post author had the information about the denial of Elizondo's role in AATIP back in May, but omitted any mention of it. At that point, the Pentagon had provided the same statement to at least three journalists, and it contradicted the AATIP leadership claims made by Luis Elizondo.

In response to the controversy, George Knapp put up a photo of a less redacted version of the final page of the Senator Reid letter on Twitter June 4, 2019, stating: 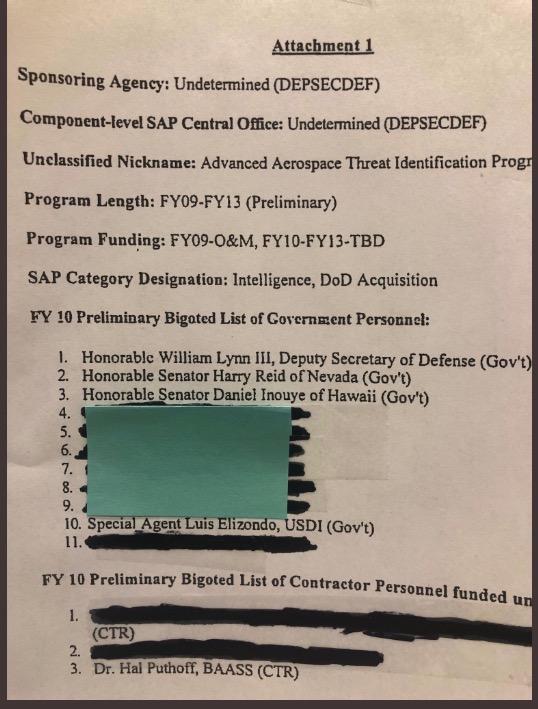 In a follow-up message, he tweeted:


"I will send out a cleaner version in a little bit. This was my own crude handiwork. Redacting the names was a condition from the source of the letter. (Some are still active in govt. Others do not want to be subjected to what Lue. E, is enduring.)"

Later the same day, Knapp tweeted a third redacted version of the list. 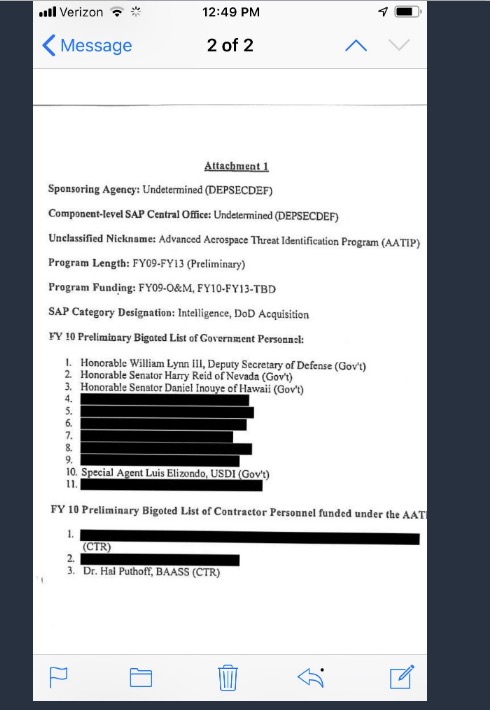 George Knapp didn't explain the differences in the appearances of the three versions he's shown, but it's clear that his original copy contains more information than he chooses to share. We can see enough in it to indicate that the number of government personnel involved in the working end of AATIP was no more than a handful, eight at the most.

The particular significance of Luis Elizondo's name in the letter is that he's among the people Senator Reid refers to in this passage.:


"Due to the expertise required to carry out the objectives of this program, we will require  a small, specialized group of DoD personnel, who are dedicated to performing the SAP-related functions and executing programmatic requirements within the program. It is essential that the Government & military personnel who are already involved with this program are assigned to further support this program in a Restricted SAP capacity (See Attachment 1). These individuals all currently possess the appropriate security clearances and are already providing unique support to AATIP."

Although the Reid letter is unsourced, it has been referenced by Pentagon spokesperson, so it  appears to be genuine, and seems to indeed establish Elizondo's association with AATIP. However, there's nothing in the letter to indicate his role. The letter is dated June 24, 2009; Elizondo states he was formally named director of AATIP when his predecessor resigned in 2010.

Reporter Bryan Bender of Politico has become involved in the story, and appears in the TTSA mini-series on History, Unidentified: Inside America's UFO Investigation. On June 7, Bender made a statement about AATIP and Elizondo on Twitter:


"This was not an office but a 'program' and then a portfolio among a series of responsibilities he and others had -- first in DIA and then in the Office of the Undersecretary of Defense for Intelligence. And I have documentation he was in charge of the portfolio."

As of June 13, 2019, no further documentation has been produced by To The Stars or any of its associated promoters to verify provide clarification as to Luis Elizondo's role in AATIP.

If AATIP was comprised only of the handful of people listed in the Reid letter, and it was indeed an assignment or study,  - a side project - rather than a genuine Pentagon program, then, AATIP may not have had a formal director. Whatever the case, despite all the press about AATIP, the journalists driving the story have yet to answer the fundamental questions about it.

Former Senator Harry Reid was interviewed on June 13, 2019 on KNPR’s State of Nevada radio program. The show was titled, Harry Reid: UFOs, The Military And Impeachment.
Part of the conversation covered the UFO topic and Reid’s involvement in the AATIP story. One particular question addressed the controversy surrounding the recent Pentagon statement about Luis Elizondo’s role in AATIP. Reid’s response was only a partial answer. He vouches for Elizondo's character and confirms the previously-established fact that he worked for the Defense Department, but does not specifically mention his role in AATIP.

Here's the transcription of the question and answer:

(At 15:28)
Interviewer: In this History Channel report, the guy who is interviewing people is Luis Elizondo, he was in charge of the Pentagon’s - it was called the AATIP program, that’s an acronym for something, I’m not sure, but it’s basically the program set up with at 22 million dollars, and online now there are people saying he never actually had this Pentagon job of looking into UFO sightings. So, can you verify that he is the guy - Can - Have you met him - Can you verify that he is who he says he is?

(At 15:56)
Reid: Oh, yes - Oh, I’ve talked to Luis on many - several times, met him here in Las Vegas recently. So here’s one thing that - what we have to understand with this: First of all, I believe in science, and that’s what we should be dealing with, but there are some people who wanted for many years to have kind of um, they’re kind of conspiratorial issues, kind of weirdness, and when they are challenged with real science, they don’t like it. So, that’s the problem we have with this. And then you have people who are just coming aboard, and they want to also report, ‘I saw a flying saucer,’ and all this stuff, and some of which is true, most of it, of course, isn’t.
So, I know Elizondo is a real guy. People are out there – a few people are trying to punch holes in what he is saying and what he does, but he was part of the Defense Department, no question about it, and a man of, I think, veracity.

Greenewald contacted Pentagon spokesperson Susan Gough to ask her about Luis Elizondo's name being listed in connection with AATIP in the Harry Reid letter. Greenwald reports that Gough replied on June 23, saying:


“I can confirm that the memo you’re referring to is authentic. DOD received it and responded to Sen. Reid,” Ms. Gough said. She then explains that her office is unable to provide The Black Vault a full copy of the response, since the Public Affairs office does not release Congressional correspondence, but she adds, “It makes no change to previous statements. Mr. Elizondo had no assigned responsibilities for AATIP while he was in OUSD(I). DIA [Defense Intelligence Agency] administered AATIP, and Elizondo was never assigned to DIA. Elizondo did interact with the DIA office managing the program while the program was still ongoing, but he did not lead it.”

Greenewald also received a comment from Hal Puthoff, former AAWSAP/AATIP contractor, ow a partner in TTSA along with Elizondo, an endorsement of his leadership of the program, which we'll shorten here as:


"I have no problem asserting... Elizondo’s leadership and responsibility for maintaining continuity of the Program..."


For the full context and other related information, be sure to read the complete article.

With this new statement from yet another Pentagon spokesperson, the denial of Elizondo's role in AATIP can no longer be regarded as merely some kind of an error by Christopher Sherwood. More information is clearly needed, and documentation to back it up.
Posted by Curt Collins at 8:17 AM