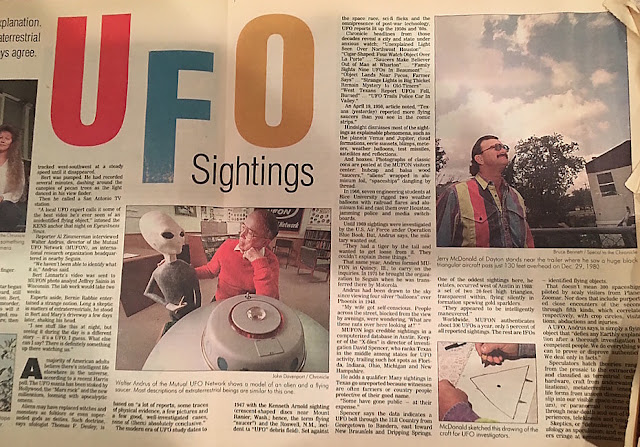 Some say they defy Earthly explanation. Others scoff at the idea of extraterrestrial visitors. Even the experts don't always agree.
by MARTY RACINE Staff

Jesus was emerging from the light to proclaim the end of the world four days after Christmas in 1980, thought two frightened women on a lonely highway in East Texas.
At dusk near Huffman, a vertical, diamond-shaped aircraft tall as the Dayton water tower approached a car on FM 1485. It dipped below the pines emitting red-orange flames, a gaseous odor and blistering heat. Blinding light flooded the forest.
Betty Cash, a 52-year-old Dayton cafe owner, hit the brakes as Vicki Landrum, a 57-year-old waitress, screamed. They knew their maker had come.
They and a 7-year-old grandson, Colby Landrum, got out of the car and stared, transfixed, as the craft hovered overhead before departing in a convoy of helicopters.

The same evening about 15 miles away in Dayton, Jerry McDonald, an oilfield roughneck, was fixing a water main outside his trailer when a huge black triangular craft sporting a brilliant red light and belching twin flames passed 130 feet overhead.
"It was there, buddy, it was there. Blew my mind, it was going so low and slow. This was no blimp. This was something out of this world. I saw something that scared the death out of me."

When news of the sightings leaked, UFO investigator John Schuessler of Friendswood launched an inquiry as head of the Vehicle Internal Systems Investigative Team (VISIT). Sketches of the supposed craft were made from witnesses' descriptions. Due to the intense light and heat reported on FM 1485, the Texas Department of Health checked for radiation residue.
None was detected, yet Houston attorney Rhonda Ross, who represented the Landrums and Cash in one of two lawsuits against the government, claims the road was dug up and repaved immediately following the incident. She hints at a cover-up.
Further, she says, Cash's car indicated exposure to intense heat: its finish peeled, hand imprints melted into the passenger dash where Vicki Landrum gripped for her life.
In the ensuing months, McDonald was hospitalized with an air pocket in his lung. The women suffered blistering and their hair fell out in clumps.

Injuries: A close encounter of the fifth kind.
Dr. Steve Chandler, a Liberty optometrist, recalls that burns around Landrum's eyes were unusual.
"Much different than you might experience in a sunburn. It was directed to the adnexia, the tissue around the eyes. Usually you're going to get sunburned all over, or you've got sunglasses on, and everything but the eye is sunburned."
Chandler remembers a distraught Landrum. "I sensed that she and her friend had seen something supernatural, something that most of us don't ever see."
To recover more details, Landrum agreed to hypnosis by Dr. Leo Sprinkle, a counseling psychologist and professor at the University of Wyoming. The session, he says, was traumatic.
"She was weeping, crying out and moaning for her fear. She took a religious orientation to it."

McDonald now thinks his UFO was a Stealth Bomber, which was developed in the late '70s. "I think (the military) just got caught with their pants down."
Perhaps. But MUFON's Andrus is leery of that explanation at Huffman. "I want to see a B-2 (Stealth) fly down a narrow two-lane highway with pine trees on both sides."
Attorney Ross thinks it was some type of spaceship. "It could have been one of ours. If it was something they were testing, it sure did go awry."

With time, the Landrums and Cash accepted a military scenario, enough, at least, to file a $5 million lawsuit against the “United States of America and all agencies."
"The lawsuit was brought in hope that behind the scenes the government would say, `Let's keep this quiet, we'll take care of the medical expenses and make sure nothing else happens,' " says UFO lawyer Peter Gersten, who represented the plaintiffs.
But the Pentagon denied accountability, admitting to no craft or helicopter maneuvers in the area - descriptions suggest Chinook helicopters - which placed Washington in the delicate position of faulting an act of God or, gosh, a UFO.
The suit was tossed out of U.S. District Court; another in 1986 was also dismissed.
Cash now lives in Alabama. Vicki Landrum, recently widowed, and Colby Landrum still reside in Liberty County. None could be reached.

Sprinkle, a believer in extraterrestrials (ETs), says there are but two possible explanations for what occurred that December evening.
"Assuming the event happened as (Vicki Landrum) described it - and I felt she was very honest - one, it was a military operation monitored by helicopter that was covered up. Or, it was an ET craft, and ET's made people believe there were helicopters. My opinion is that it was a U.S. operation."
Sprinkle, who says he twice has seen flying saucers, presumes many of the 500 UFO witnesses he has counseled since 1965 have communicated with ETs through either a physical encounter, mental programming or an out-of-body experience. Related psychic events are common: nightmares, self-activating radios, names called over loudspeakers.
"My view is that these (encounters) are a very slow educational process to prime humans for awareness of ET presence. Cosmic consciousness. We're learning how to be galactic persons.
"We may be preparing to leave the planet. We'll be forced to from burgeoning population, or we'll be encouraged to because we want to explore. Then we'll build flying saucers and become ETs for somebody on other planets."