Jessie Roestenburg’s 1954 UFO Encounter and Beyond: The Extras

continued from
Jessie Roestenburg’s 1954 UFO Encounter and Beyond
Epilogue: The Forgotten Witness

There’s another element of the original encounter, a seldom-mentioned witness whose whereabouts are uncertain. What became of the Roestenburg family dog?

The Express and Star, October 22, 1954
Mrs. Roestenburg: "The boys were so terrified that they would not go out again last night," she said. "The dog was no-where to be seen. I think it must have bolted."

Gavin Gibbons in his 1956 book, The Coming of the Space Ships

“The dog, which had accompanied them into the garden at the first alarm, shot off howling down the track that led into the village. Yelping, he scudded along, impelled by the one thought of escaping from this strange thing that he could not understand, away to the comforting sights and smells of the humans that he knew and loved.”

“Their dog, which had run out into the garden with them, dashed away, howling and yelping, and it is understood that the animal was never seen again.”

Flying Saucer Review, Vol. 38, No. 1, 1993 carried an article recounting the case, “The Roestenburg Story (1954)” by Gordon Creighton, and a note by editor Charles Bowen adds information about the canine witness:

Note by editor, FSR One highly interesting detail which Gavin Gibbon gave me and which, as far as I can now recall (without having his book in front of me) he did not mention in the book was this: -“Although the metallic disc... made no detectable noise apart from a ‘whoosh,’ its effect on the Roestenburgs' spaniel dog was electrifying, for the animal 'lit out' at full pelt, and was never seen by the Roestenburgs again.”

The reaction of the Roestenburg’s dog was included among the cases referenced in
“Preliminary Studies of Animal Reaction to UFO” by Harold I . Heaton, published in . Proceedings of the 1976 CUFOS Conference, Center for UFO Studies, Evanston, IL, p. 98-109
(Heaton used Creighton., G., Flying Saucer Review no. 3, 29 as a source.)

(Chronology derived from Gavin Gibbons’ books. It should be noted that Gibbons did not investigate these reports. He seemed to assume they were all accurate and genuine, and his main concern in UFO reports was to identify what shape and type of spaceship was involved.) 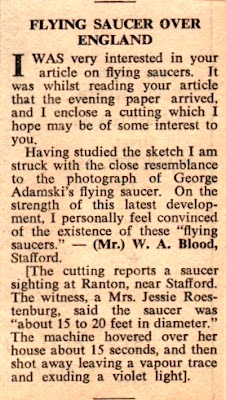 1955
No sightings reported. Tony continued his skywatches, and meetings with author Gavin Gibbons. 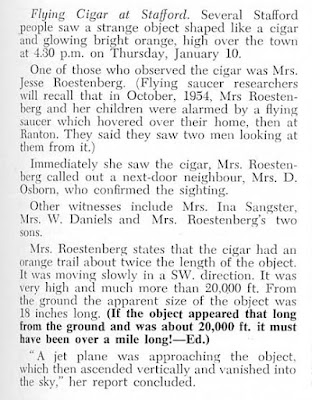 Flying Saucer Review, Sept./Oct. 1957. Vol. 3, No. 5.
“World Round Up,” Europe, Great Britain. (pages 5 & 6)
‘’Stafford in the news again. A spaceship was undoubtedly over Stafford between 8.30 p.m. and 9 p.m. on May 13, the night of the eclipse of the Moon. Five independent sighting reports have been received from Mrs E. Hooley, Miss June Pennells, Mrs Jessie Roestenburg, Mrs U. M. Daniels, Mr. R. J. Daniels, all of various addresses in Stafford. Four of these reports have witnesses. In all cases the position of the Moon in relation to the object was behind the observers. Most reports described the object as being oval shaped, rather than circular. Most observers stated it was silvery, though two said it was golden in colour. The object made no sound. These reports were all investigated by local area investigator Wilfrid Daniels.’’

NOTE: An example of  how mistakes can be propagated in ufology can be found by searching for the error on Mrs. Roestenburg’s name. Charles Bowen in The Humanoids, 1966, got it wrong as “Jennie Roestenburg” and and many others have repeated the error since without checking the source, from Jacques Vallée in Passport to Magonia, Coral and Jim Lorezen in Encounters with UFO Occupants, to Jenny Randles who interviewed Mrs. Roestenburg a few times got the name wrong in some of her books. The error still circulates in books and is rampant in online UFO databases, and none of them address the other Roestenburg sightings.

Another problem is creative interpretation. An example:
John Schuessler in his 1996 book, UFO-Related Human Physiological Effects has a short entry on the Roestenburg cased based on a single source, which he incorrectly cites.

1954/10/21. ENGLAND, RANTON, STAFFORDSHIRE1645 Source: Alien Abductions - The British CatalogueJessie Roestenberg and her two sons saw a UFO from their home. Jessie heard a roaring sound, when outside, and saw a disk-shaped object. Through a window in it she could see two beings. She said time were suspended and she was paralyzed. Later she developed ESP. EFFECTS: Paralysis                   Time suspension                   ESP development

He bases the “physiological effects” off of these quotes of Mrs. Roestenburg from the book, one where she describes the sensations of the sighting.

“It felt like hours passed, but it must have been seconds. Time was suspended. I was also paralysed. It was like I was in a vice. But my mind was working overtime.”

She then describes looking at and talking to her children, so not literal time suspension or paralysis.

As for the ESP, that’s more a matter of interpretation. Randles quotes Jessie as saying that afterward, she had a “great, almost extreme, development of ESP.” However, the ESP is not explicitly stated as being connected to the UFO sighting, and it’s in conflict with what Jessie told Wilfred Daniels in FSR in 1955, that she had psychic experiences before her first UFO sighting.

What Schuessler missed was the actual “physiological effects” claimed by the witness, more accurately described below:

“The witnesses were shocked, Jessie suffered a facial rash, the two boys and her two year old daughter began to act up. The family had other sightings and felt uneasy until they moved house.” Gibbons 1956, chapters 7 and 8.

A 1990 letter from John Bainbridge to Gordon Creighton was printed in Flying Saucer Review, Vol. 38, No. 1, 1993. Bainbridge said that a few years after the Stafford UFO sightings (sometime between 1957 and 1964) he had a chance encounter with Mr. Roestenburg while on a train trip returning home from London. They began general conversation as strangers, but the man suddenly brought up the topic of UFOs, eventually discussing his family’s sightings. When asked, Roestenburg stated that he was not interested in religious matters. The odd part was that during the conversation, Bainbridge thought Roestenburg was receiving an alien message when he looked upwards, held out his hand and seemed to channel the words, “He is to yourself as your own brother!” 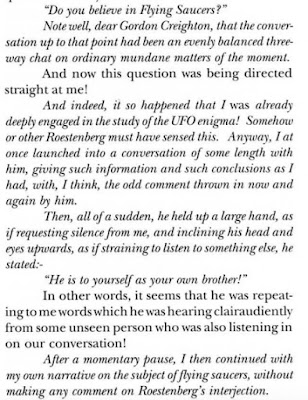 Bainbridge went on to say that sometime later, he met Wilfrid Daniels and discussed the case, and was told “that Roestenburg had given up his good position as a building surveyor, and was now a full-time high priest in the Mormon church!”

It’s tough to know what to make out of so much second-hand information, but it’s worth noting that Bainbridge identified Anthony as “Arthur Roestenburg.” Also, in other parts of his letter, Bainbridge was discussing cosmic conspiracies and the prophecies of Edgar Cayce.
. . .