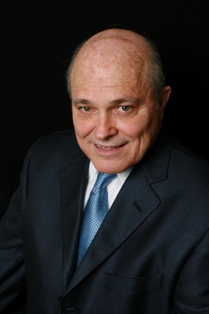 On the UFO Hunters episode "Alien Fallout", Bill Birnes questioned Colonel George Sarran about the following entry in his notes:

Colonel Sarran was unable to explain the entry. The implication was that he'd uncovered a massive helicopter operation and then buried the evidence. A bit of digging reveals the probable source for the helicopter notation.

According to October 1982 issue of the MUFON Journal article written by John Schuessler:


On 19 March 1982 I was called by Lt. Col. George Sarran from the Department of the Army Inspector General office in the Pentagon. Col. Sarran explained that his office had received the inquiry from the Air Force Liaison Office because the Air Force had concluded their units were not involved. He explained that his interest was in the possibility that Army helicopters were involved. He would be investigating that allegation. He stressed that the U.S. Army had no opinion about the unidentified object or UFOs in general. 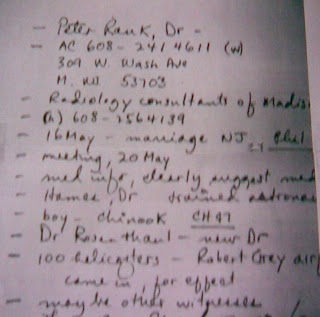 Lt. Colonel George Sarran made these notes, in March or April 1982, probably during a phone conversation with UFO investigator John F. Schuessler in preparation for their first meeting in May. The "100 helicopters" notation seems to be just a recording of Schuessler’s comments. Compare them to earlier published statements by John Schuessler:

One significant helicopter operation took place at Gray Air Force Base near Killeen, Texas, where more than 100 helicopters came in from the field “for effect.”

The unit operating out of Ellington AFB in Houston had landed before the sighting time. Robert Gray Field had 100 helicopters come in from the field at one time "for effect," but claimed to have avoided the Houston area. Hence, no one claims the helicopters that filled the Huffman area sky that winter night.


At the Robert Gray Field near Fort Hood a spokesman said they might have 100 helicopters from the field home at one time "for effect", but he claimed they avoided the Houston area.
"Blind Terror in Texas" by John F. Schuessler, The Unexplained (UK magazine) 9(107) 2121-25, (1982)

Update: On a site hosting a video of the UFO Hunters episode, one of Col. Sarran's co-workers spoke on his behalf:


Author exitpleasantrealty    The characterization that Mr. (Former Colonel) Sarran was lying is quite incorrect - - you have to know Mr. Sarran﻿ as I do and have for six (6) years - - he literally (even after retirement and becoming a businessman) writes down notes copiously. As soon as we saw this episode we knew someone had mentioned "100 helicopters" and he had merely wrote it down...........if they had shown all the notes instead of just that line you would have probably seen more info - - this man doesn't lie.

It made for a "gotcha" moment on the UFO Hunters show, but in this case, the charges are false.