The Absence of Evidence…

One of the strange things reported was the impression of Vickie's handprints to the dashboard during the incident.

John Schuessler had his own version of how the handprints were made:


“As Vickie leaned forward to peer out of the front window, her hands grabbed the padded  dash area which molded into the shape of her fingers. The imprints are still there."                   -J. Schuessler, CUFOS symposium, Sept.1981

The emphasis placed on the handprints by the witnesses is significant. It may yield valuable insight into how the reality of the event differed from their emotionally charged memories of it.


The dashboard plays another small role in the story, it provided cover for Colby Landrum to view the object after retreating into he car. Vickie Landrum speculated that it provided him a better view of the object, allowing him to describe a shape for it.


In John Schuessler's original report, he stated that
“When the group met the UFO they stopped the car - it did not fail on its own.”

But controversy arose when Betty Cash started saying otherwise:
Allan Hendry interview FUFOR 4/2/1981 talking about the motor stalling:
BC: “It just quit on its own…”

"I had not killed the motor on the car, I had put it park. The radio was
playing on low, but the car completely went dead. I mean, it was like somebody
had turned a switch off on it." BC in Bergstrom AFB interview 8/17/1981

This discrepancy was not addressed in Schuessler's reports, but he deftly sidestepped the issue in 1982:


“It is not clear whether Betty turned the car engine off, or whether it just died."
The Unexplained (UK) Orbis Publishing Limited, Vol 9, Issue 107

By the time of his book. He repeats testimony given by Betty Cash describing the motor stalling in the presence of the UFO and includes it in his narrative:

“But for the first time she realized the engine on the Cutlass had died.”
(JS narration of the scene following the UFO’s exit,) CLUFOI pg 13

The electromagnetic effects in the case would be a major point of interest, but due to the the initial report stating the witness stopped the car's engine, it can not be regarded as anything but an unsubstantiated later claim. When combined with a huge brilliant ovoid UFO, it certainly is reminiscent of the 1957 Levelland incidents in Texas, though.

“As Betty glanced to the side and then looked through the rear window, seeking some way to escape, but the highway was narrow and she was afraid of getting stuck in the muddy ditches if she tried to turn around.“Vickie, I can’t even see the sides of the road!”, she shouted, “I can’t turn around and I don’t dare back up.” The Cash-Landrum UFO Incident by John F. Schuessler page 78 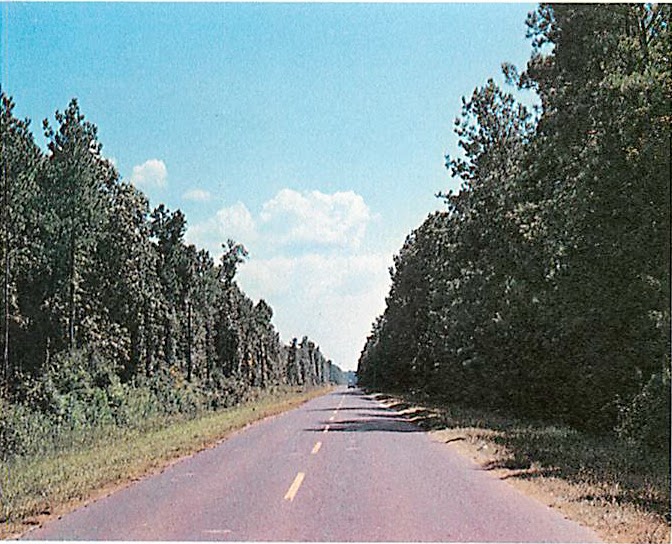 Part of the reason for not turning the car around was that the shoulders were wet from rain earlier in the day. As seen in the auto's specifications, it had a huge turning circumference, and the road was approximately 18 to 20 feet wide. No mention was made of trying to restart the car to escape. 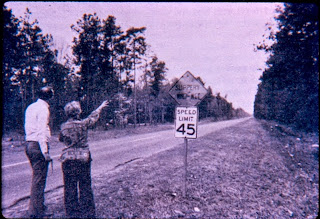 Another interesting detail is the height of the car, 53.1 inches. Vickie supposedly burned her hand from laying it on top of the car. She was short, five feet tall (60 inches). Unless she was standing on the threshold of the open door, it seems unlikely she could reach up to lay the back of her hand on the car's top. Even so, it would seem to be an uncomfortable position, more so that she was said to also be restraining and comforting young Colby during this time.

Getting Out of the Car

The sequence of events following the car stopping has been explained and second-guessed, as to who got out and for what reason.

“Then Betty got out of the car and started walking toward the object. It was as big as a water tank and about a half-mile up in the sky. It started getting real hot in the car, so I rolled the window down and stuck my head out to look at it."  Vickie Landrum Weekly World News March 24, 1981

“ they opened the car doors to stand beside the car and watch.”MUFON Journal April 1981 (Richard Hall’s case summary)

"The car heated rapidly, forcing them out into the open where the heat seared their skin and caused their eyes to burn."Schuessler, J. F. (1996). UFO-Related Human Physiological Effects


After interviewing Betty Cash for the for the first time in Feb. 22,1981, John Schuessler then examined her automobile:


"The car was a 1980 Oldsmobile Cutlass Supreme with Texas license number VAS 217. I examined it for obvious damage and found it to be clean and in good condition. The exterior paint and plastic parts were all found to be in good condition. The tires were like new. The only visible anomaly was some very clear hand-shaped imprints in the padded dashboard on the passenger (right)side. A geiger counter was passed over every part of the vehicle,but no readings above background radiation level were found.Also, no unusual strong magnetic fields were found by using a hand-held compass as a detector. When started up, the engine did run a little rough."


Betty later claimed that two unidentified military men tried to purchase the vehicle. Vickie told a similar Men-in-Black story that they approached Betty offering to replace the car's interior. Two other bits of trivia, the car's plastic steering wheel crumbled, leaving only the metal frame. Supposedly Betty saved the pieces for study, but nothing further is known. More dramatically, in the mid-80s while the legal efforts were churning, Betty was in the Houston area with her car for a recreation for Mitch Duncan of KHOU. When the spotlight lit the car, it shattered the windshield, something it should not have done. Fragments of the glass were saved for study. It could be that glass and plastic fragments lay forgotten among the belongings of Betty Cash.


Sadly, the car was not retained as evidence, and Betty drove it for many years afterwards. Ken Storch located the car in the late 90s, somewhere in south Mississippi, but was unable to obtain funding to investigate further. Chances are, no further information could be retrieved, but still, what a relic!