What Good Are 25 Years of UFO Reports?

"UFOs Over Canada: 25 Years of UFO Reports" was issued in July from Ufology Research. The media has given the report some good coverage, but mostly short bits not allowing for detail. At the end of August, Chris Rutkowski was invited to appear on the Paracast (a UFO and paranormal talk show), and their format allowed for an in-depth discussion. His intro:


Explore 25 years of UFO sightings in Canada with long-time investigator Chris Rutkowski. He and his colleagues have accumulated a huge archive containing some 15,000 UFO cases in Canada. The new survey covers the years 1989 through 2013. When you check the report at his Ufology Research site, you'll notice that the number of sightings increased in 2012 before settling down to a somewhat lower, but still historically high, level in 2013. Says his bio: "Chris Rutkowski, BSc, MEd, is a Canadian science writer and educator, with a background in astronomy but with a passion for teaching science concepts to children and adults. Since the mid-1970s, he also has been studying reports of UFOs and writing about his investigations and research."


The interview turned out to be a far-ranging one, touching on many major issues in the examinations of UFOs, from their study to media coverage. Several cases were discussed, both famous and obscure, including one of great personal interest to me, the Cash-Landrum incident. 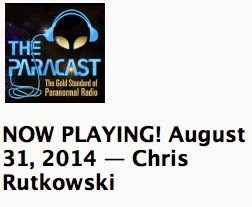 Chris was asked to be on the show to primarily to discuss the study, "UFOs Over Canada: 25 Years of UFO Reports." The report itself is very interesting and it makes excellent points about the value of data collection and analysis. I recommend highly reading it no matter what your views are on the subject. The study strives to accurately record what is reported, and does not seek to characterize the unexplained cases beyond saying they are unknown.

"If UFOs are not 'real,' then why are tens of thousands of Canadians (and others worldwide) seeing unusual objects in the sky?"

Utilizing the database in the 25 year study, Chris Rutkowski, made
A Comparison of UFO Sighting Reports Between 1989 and 2013 with the list of Visually Observed Natural Re-Entries of Earth Satellites compiled by Ted Molczan
http://uforum.blogspot.com/2014/08/re-entries-of-rocket-boosters-and-ufos.html

This re-entry comparison study is interesting for several reasons. It immediately demonstrates the practical application of having a disciplined body of data. Having Ted Molczan's list allows for a comparison of the success rates of ufologists (or at least this group of Canadian ufologists) in identifying reported objects.

Another, interesting point is that the orbital object re-entries allow a good sample of reports generated by known stimulus, allowing for an examination of how well witness are reporting the objects they see. Skeptics tend to distrust eye witness reliability, but this collection shows that the objects and actions were reasonably well described, if not understood, by the  witnesses.

Re-entries of man-made objects provides an excellent opportunity for science and ufology to work on a common area of interest and share information. UFO proponents and skeptics alike should be able to agree on the value in that kind of dialogue.