At Open Minds, Alejandro Rojas has posted the later issues of the APRO Bulletin collection:

"The APRO Bulletin was the official publication of the Aerial Phenomena Research Organization which was founded in 1952 by Jim and Carol Lorenzen. APRO continued through the 1980s and below is a nearly complete collection of the APRO Bulletins for research use."


The APRO Bulletin is a great slice of UFO history and you can follow how cases were reported, discussed and disputed. APRO was the first organization to get the Cash-Landrum case, but they were unable to investigate it, and passed the job to Project VISIT, led by John F. Schuessler. They continued to follow and report on the case, providing valuable insight and opinion.

Vol. 29 #8 Sept. 1981
Burns Follow UFO Incident
1st published detailed report on the case, an excellent article, with details never featured anywhere else. Material from this issue were used by Peter Gersten in the claims filed for the witnesses.


Vol. 32 #7 Sept.1984
Ufology-according to whom?
Response to the MUFON editorial by John F. Schuessler, features summary of APRO’s involvement in the C-L case.


The link again, to the entire collection:
http://www.openminds.tv/apro-bulletins

Some of these articles were used in a heated exchange between the Lorenzens and Schuessler, with notes written in the margins. See this earlier article: 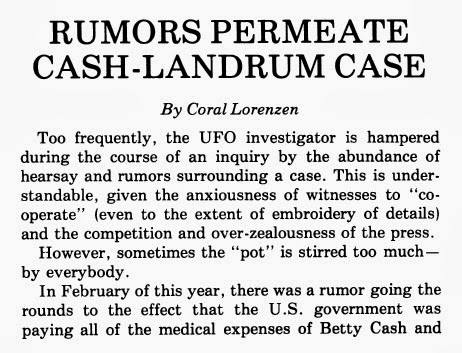