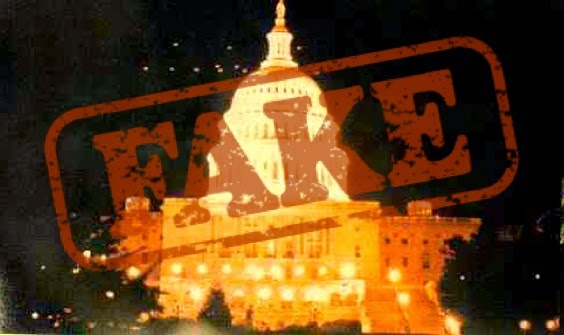 The flying saucers reported over Washington, DC in July 1952 is one of the most famous events in UFO history. Objects tracked on radar, and Air Force planes were sent out to investigate, and reportedly, UFOs were seen by at least one pilot and radar operator.

It's an important historical event, worthy of examination, but...
There are rumors and myths too, such as it being widely witnessed by panicking citizens or that photos exist of the event.

If you need a recap, it was covered at the time in the August 4, 1952 issue of LIFE magazine 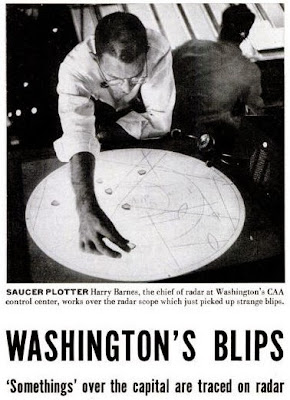 It was also covered in a NBC television broadcast, "We the People," which featured interviews with the radar operator witnesses. See The Saucers That Time Forgot: UFOs on TV: The 1952 Washington, DC Saucer Flap.

Had there been a photograph of UFOs during the incidents, Life Magazine would have been happy to publish them. None surfaced despite this being among the most heavily publicized cases in US history.

In 1965, over a decade after the events, a photograph was published, and ever since has appeared in almost every discussion and article on the Washington, DC, case, from books, to the internet, documentaries, and television shows. The trouble is, it's a phony.

Well, the photo is real, but it is used as a fraud, then accepted and repeated as genuine by people who should know better. It was taken several years after the event, and instead of UFOs, it depicts the reflection of the Capitol's lamps- lens flares.


The first known publication of the picture is in Ray Palmer's Flying Saucers No. 81, Summer 1973

As seen on the magazine cover above, it's often cropped to remove the lamps, the source of the "UFOs." It was exposed long ago, in a detailed analysis by Colman von Keviczky that was published in Official UFO Magazine #9, July 1976. A summary by Dr. Bruce Maccabee :

This picture which shows the Capitol dome and lights at the left side is, I believe, just a fraction of the total picture which shows the whole Capitol building, parking lot lights in front of it and numerous "UFO" lights in the sky at both the left and right sides of the dome. Colman von Kevicsky, years ago, showed the "UFO" light images were actually lens "flares"....reflections within the lens of the bright streetlights and parking lot lights in front of the Capitol.

and below, a video examination by Fin Handley

Nevertheless, once a fake gets into the UFO bloodstream it lives forever. The internet and television assured its immortality. There are even phony motion pictures of it. 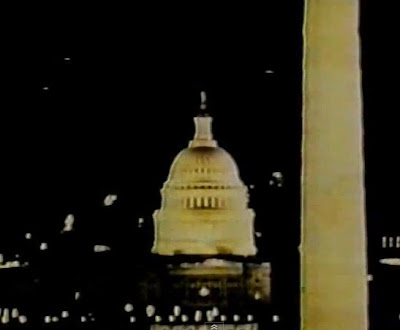 http://youtu.be/HedoH9PUn1g?t=10m25s
Disney's Alien Encounters from New Tommorowland, 1995 features a clip
of animated UFOs over the Capitol at 10:26.

a different animated version of the photo.

Here's Jan Harzan, the director of MUFON, using this fake photo on a 2016 UFO lecture, saying, "These are visual photographs of the actual objects."
These are just a tiny fraction of the appearances of the photo. By gathering some of this data, maybe this will show up alongside the search returns, and people can get some better information on the history. We've not seen the last of this one, but just remember that whenever you see it, you are looking at a lie, ineptitude, misinformation or disinformation on the part of whoever is presenting it.

The DC deception's inclusion as an indicator of a high baloney content. It shows that they're not a trustworthy source.

The Italian UFO group CUN hosted a presentation in Rome on Oct. 27, 2018 by Tom DeLonge on the To The Stars Academy of Arts and Sciences, and Luis Elizondo on the AATIP.  Elizondo discussed some UFO history, including the famous 1952 Washington, DC saucer event saying:


In the early 1950s, the United States had another very significant event over our nation’s Capitol. Once again, these objects were identified both with the naked eye and again on radar, and unlike Roswell, many people had cameras and were able to take photographs. And what you see here are real photographs, along with the story - the headline story that came out. 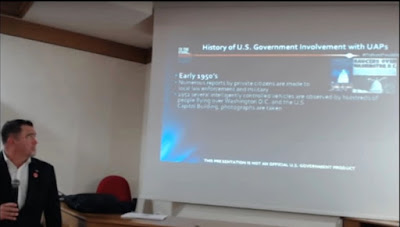 Elizondo's picture came from the internet, a YouTube preview image for the video, "UFO Sightings over Washington D.C. and The White House in 1952," by FindingUFO. 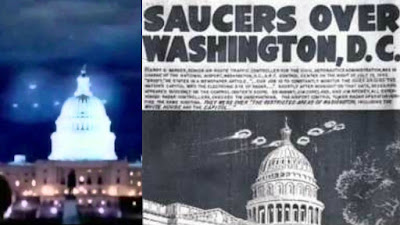 It is composed of two images: 1, a frame from a CGI-animated version of a picture of lens flares from UFO's: The Secret Evidence, and 2, a b&w version of an image from the 1954 comic book, Weird Science-Fantasy #26 found in the files of Project Blue Book.

Luis Elizondo published an update on the Facebook page of To The Stars Academy of Arts and Science on Nov. 1, 2018, which stated in part:


While providing general background, I indicated that one particular slide contained real photographs of UAPs over Washington DC. It did not. The slide was intended to be illustrative but was presented as factual and with the help of a few individuals, I quickly realized the error. I acknowledge the misstatement and sent an immediate "mea culpa" note to my TTS Academy team... it was an oversight on my part, and it will not happen again.

That's a nice step towards fixing a virulent problem in ufology.

This fake UFO photo is like Dracula in the movies. It rises from the grave again and again.