The Smoking Gun: RIP to the Roswell Slides

I'm trying to get out of the Roswell Slides business, but as long as the promoters keep pushing the false claims and making accusations there's some unfinished business. 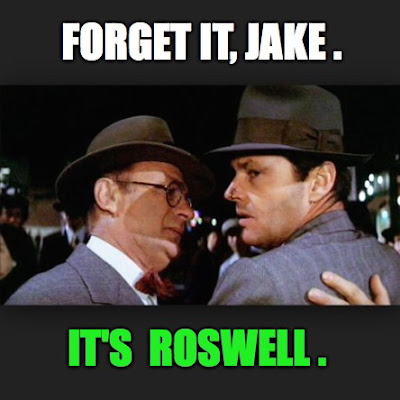 Most of it is silly, but there are a few points to clear up.

The placard was handwritten in cursive script, how can it deblur into text?

Tom Carey on the placard from the March 22, 2015 Contacto show with Jaime Maussan:

“It’s handwritten, it's not typed like it would be in a museum; you know, a museum would have a professional display placard identifying what it is that’s there in the background behind it. This is hand written as though it was written- with just- put together fairly quickly, perhaps for a limited viewing. It's not in the museum, it’s in a indoor location- where we don't know, but it's obviously to us, for a limited viewing, that’s temporary construction.And on the plaque, there is writing, and we have been actively researching, trying to quote unquote “read” what's on the placard for three years and we’ve only recently come into contact with some experts in this sort of thing. We tried reading it on her own, we’ve used several outside people, some of whom, one of whom had done some work on the famous Ramey memo from General Ramey in 1947 and we are now able to read a few of the words, based on what the experts are telling us, and the debunkers who have been debunking this are going to be disappointed, I can tell you that."


Well, that's a curious claim, but let's focus on the "handwriting" for now.


"...the motion blur, which was 'boomerang-shaped', jerked horizontally right then diagonally upward to the right (or vice versa). This probably resulted in the printed text having a hand-written script-like appearance.

Why did previous attempts fail but the RSRG and others succeed?

David Rudiak (in the same statement from above) explains:

“I think the failure to deblur the image previously had nothing to do with the scans provided and had everything to do with the blur being complex in nature (both simple focus and two directions of motion blur), which most deblurring software cannot handle (at least the deblurring software I tried). E.g., to handle motion blur, most packages require you hand-set the direction of blur, which wasn't known here, plus having two directions to deal with.
It might have helped had we been provided the high resolution scans of the entire slide, which showed the nature of the motion blur.”
https://www.blogger.com/comment.g?blogID=11558306&postID=8159526343263081173

A demonstration by Fin Handley of the "handwriting" to text. 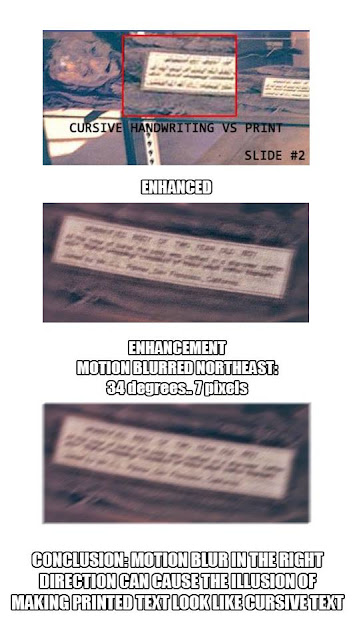 The New News: Laying the story to rest

Below are two stories by RSRG team member S. Miles Lewis, first an excellent history of the whole Slides story (well, except for the missing pieces that still remain hidden). 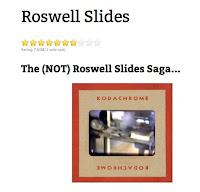 The (NOT) Roswell Slides Saga…

And finally, the Smoking Gun 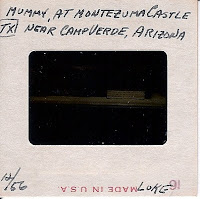 The second story is new and important. It covers the recent discovery of an independent photo of the child mummy, one photographed in 1956 at the Montezuma Castle museum in Arizona.
Believe it or not, it's another slide.

Breaking News on the (NOT) Roswell “Alien” Slides

Wait, what about all the claims of anomalies in the body in the photos?

First, I'd note that the people making these claims have not examined the body, not even the slides themselves, only digital copies. The best evidence presented for the case that the photos depict an alien, are the same pictures that include details of the museum where it was displayed, and the label that was placed on the body by people who actually saw and handled the body.  They can be considered the real experts, and they were confident enough put their testimony in writing:
"MUMMIFIED BODY OF TWO YEAR OLD BOY"