Erica Lukes, Ted Roe and the Attack on Isaac Koi 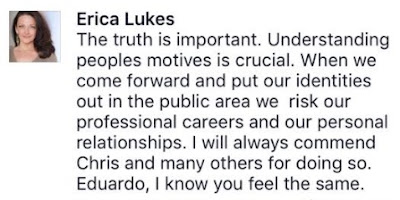 Isaac Koi is a well-known researcher from the UK working to preserve and share UFO literature and documents, with the stated purpose of making them freely available to all. Isaac is known personally by a few trusted colleagues, but uses a pseudonym while working in the UFO community in order to protect his career. Recently, exposure of his identity has been threatened, causing him to announce that he was leaving UFO research.

Here's how it came to be.

(Note: The entire discussion along with the others that followed can be found at:
Cross-referenced copy of Isaac Koi’s farewell statement )

Nov. 28, in the Facebook group "ET Disclosure International," Chris Rutkowski started a discussion about how an old fake photo was featured in a recent book, "UFO's and Alien Abduction Phenomena: A Scientific Analysis" by Harold Povenmire. Chris Bledsoe is featured in the book, and he was touting Povenmire's reprint of a newspaper April Fool's Day joke from 1950 as a genuine photo of an alien body. 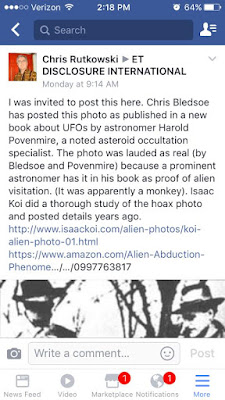 Bledsoe angrily defended the photo as genuine, said Povenmire was infallible, and asked "Who the heck is Koi?" Without knowing anything about the book or photo, Erica Lukes had joined the conversation to support Bledsoe and picked up on the issue of Isaac's anonymity, "Understanding peoples motives is crucial. When we come forward and put our identities out in the public area we risk our professional careers and our personal relationships." 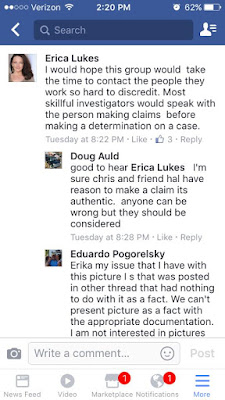 After that, Ted Roe came in saying, "Isaac Koi deserves some respect for his work, however, operating under a pseudonym makes everything he says suspect." It snowballed from there, with Roe losing his cool, "I have..I'll ask.....Who the fuck is Isaac Koi and why won't he comply w the standards we do?" 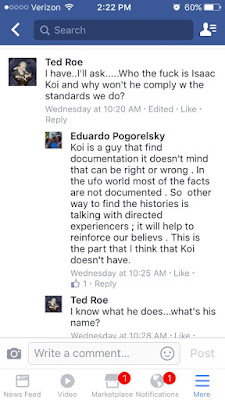 It escalated with unsubstantiated allegations against Isaac and his "followers," charges of bullying and abuse. When a conference was discussed where Isaac had met with researchers, including some from NARCAP, Roe said that his friends had taken pictures, pictures that would identify Isaac.

Afterwards Roe threatened, "watch how I make these malcontents famous anytime someone searches their name." 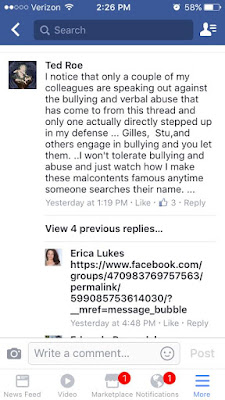 Roe now claims the controversy started with an attack post on him elsewhere by skeptic Gilles Fernandez, but that's a smokescreen. Roe has issued a series of denials that he's made any threats of exposing Isaac Koi's identity.


Confronted about his actions, Roe denies it while insulting anyone who shows support for Isaac, portraying them as imaginary followers or Isaac's "minions" of trolls.

This attack on Isaac Koi is Erica Lukes' revenge enacted by Ted Roe, fallout in part from the Roswell Slides fiasco. Lukes was a guest host for MUFON's show on KGRA where she interviewed Jaime Maussan between BeWitness and his MUFON symposium appearance, allowing him to defend the Slides against the critics he said were trying to discredit him. Her primary concern was trying to get the meanies to stop saying unfavorable things about her friends. Lukes has referred to Maussan and Paola Harris as role models that have guided and supported her. She sees anyone criticizing the fakes that these two promote as hateful debunking abusive meanies. She apparently saw the team that exposed BeWitness in that light. Isaac Koi, Chris Rutkowski and I were among the members of the "Roswell Slides Research Group," and it's tragically comic that Lukes rushed in to defend yet another fake photo of a dead alien, this starting this disgusting episode.


There have been shrill cries from Roe and Lukes about bullying and abuse, but they seem to have
engaged in plenty of this behavior themselves while pretending to be the victims. This Dec. 1 post from "UFO Classified  with Erica Lukes" shows she hasn't let the Slides fiasco go. She portrays herself as a victim of bullying attacks, just like Anthony Bragalia.


Later in 2015, as part of Erica's MUFON job, she elected to shut down their Facebook discussion group with over 12,000 members. The real purpose was to silence conversations by and about John Ventre (and other embarrassments). I exposed her hand in this publicly, and it made her furious. Time passed, Erica eventually left MUFON and there were no other conflicts until we heard that she was part of a new organization, one that would provide, "... peer-reviewed publication, networking and collaboration, events, expert analysis, and more..." the International Association of UAP Researchers.

When Isaac posted a notice about Ted Roe's new IAUAPR group, I asked that since Erica was a member would her mentors Maussan & Paola Harris be a part of it. I'm sure that infuriated her, and her boss Ted Roe came to her defense and started a feud with Isaac. It trailed off when Isaac refused to respond to Roe's insults.

Erica Lukes found an opportunity to strike back. At the discussion at ET Disclosure International, the topic of Isaac's anonymity came up. Erica seized on this and then Ted Roe took over for her. She'd like to punish me, Gilles  Fernandez and the other "meanies," but found Isaac Koi an easier target. As a result of Roe's threats, Isaac is being forced to withdraw from ufology in order to protect his career and family. Isaac's done an invaluable service to the study of UFOs by working to preserve its history. This a huge loss to UFO scholarship.

Ted Roe is just a henchman. This is clearly the work of Erica Lukes​.


For further details and documentation: