There have not been a lot of new entries here lately, but it's not all due to inactivity on my part. Although I've used the blog format for convenience, the intent has been to present some content of substance. There's a place where I do share some trivia and topical thoughts on a more regular basis,
Blue Blurry Lines on Facebook (and far less often on Twitter.) 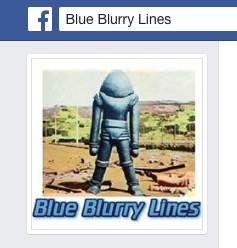 There are a number of unfinished projects in the works, including the Cash-Landrum UFO case, a look at the relationship between Science Fiction and Flying Saucers, an examination on real-world secret projects versus to the legend of the "Cosmic Watergate" UFO cover-up, and several UFO history pieces. The problem I have is that it's more fun for me to gather the research than it is to do the work of getting it written. Besides, in UFO matters, there's usually no clear place to stop, no convenient "ending."

"What's Wrong with this Picture?" is one piece I managed to actually complete, an essay to published in Robbie Graham's UFOs: Reframing the Debate. His Silver Screen Saucers is a fascinating look at the feedback loop between flying saucers and commercial entertainment.
This new book is described as "a collection of original essays exploring alternative perspectives on UFOs and how we might more usefully study the phenomenon in the 21st Century." My chapter, "What's Wrong With This Picture?" deals with UFO investigation methods, using the fiasco of the Roswell Slides as a case study, and it focuses on the inside story of the Roswell Slides Research Group, how the team worked, and almost didn't.
UFOs: Reframing the Debate is available from the publisher  White Crow Books and online retailer, Amazon .


"Another great work by UFO Culture Satirist, Claude Falkstrom. I nominate this for an Academy Award for editing...LOL!!"

The Curse of Roswell