The US Government’s Cash-Landrum UFO Investigations 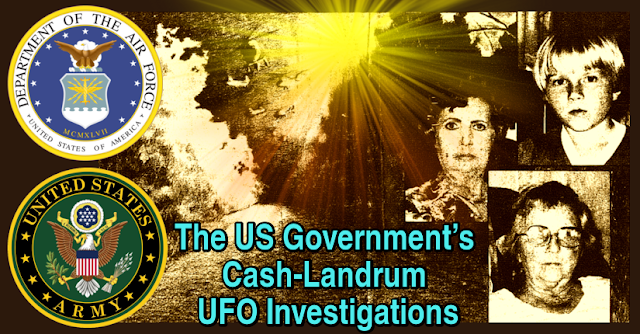 The 2017 disclosure of the Pentagon’s Advanced Aerospace Threat Identification Program (AATIP)  renewed interest in the US government’s post-Project Blue Book investigations of UFOs. The Cash-Landrum incident of December 29, 1980, occurred about ten years after the Air Force study of UFOs came to an official close. Documents prove that there was an official interest in the Cash-Landrum case, so it provides a perfect subject to use in a search for evidence of further UFO investigations by government agencies.

There were several known official inquiries into the Cash-Landrum case, from the local level to the federal government. Some are well-known, while there are others that are virtually unheard of. We’ll look at them all, and provide sources for further information.

The Cash-Landrum case was not reported promptly, but when Vickie Landrum did notify the local law a month later, but they did not investigate; Chief Waring referred her to NUFORC, the National UFO Reporting Center. After Vickie called NUFORC, the case was passed on to UFO groups, which eventually led to its investigation almost three months after the incident. For those needing a recap of the Cash-Landrum encounter, see Vickie Landrum's Phone Call to Report a UFO Encounter: The Call that Started it All.

The UFO investigation was led by John F. Schuessler, an employee of McDonnell Douglas, a contractor working on the Space Shuttle project at the NASA’s Johnson Space Center in Houston, Texas. Schuessler was deputy director of the Mutual UFO Network, and also ran Project VISIT, his own elite organization of UFO hobbyists. Some of the people they interviewed for the C-L case were under the impression that NASA was investigating the sighting, due to the way the group introduced themselves. Project VISIT’s UFO Hotline cards stated they were “composed of NASA Aerospace Engineers.” Many people heard “NASA,” but ignored the part about them being a civilian and unofficial organization.
See Project VISIT takes a case for further details on Schuessler’s organization. 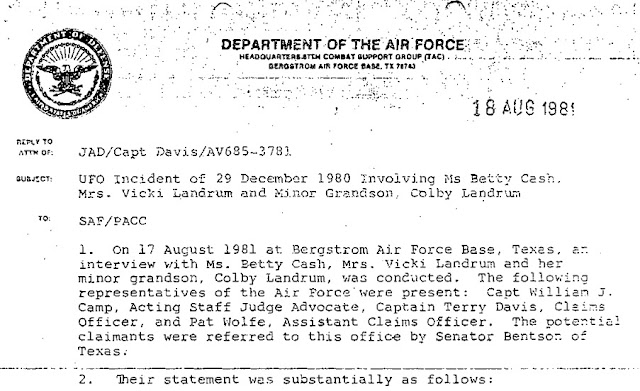 Betty Cash wrote to Texas senators, Lloyd Bentsen and John Tower describing her sighting and asking for help. The replies she received suggested that she go to the nearest Air Force base to file a damage claims form for her complaint of injuries related to the UFO incident. As a result, on August 17, 1981, Betty Cash, Vickie and Colby Landrum traveled to Bergstrom Air Force Base near Austin, Texas. They were interviewed by Captain John Camp, Acting Staff Judge Advocate, Captain Terry Davis, Claims Officer, and Miss Pat Wolfe, Assistant Claims Officer. The interview provides the best publicly available testimony directly from the witnesses, the closest we have to them being interrogated as if in a courtroom. The meeting was taped, and later transcribed. For more details on Bergstrom interview, see From their own lips: Betty, Colby & Vickie tell their story

Captain John Camp told them that since Project Blue Book was defunct, there wasn’t much they could do for them. He said:

"My intentions are to hear what you had to say this morning and to try to get it into an agency of the Air Force or portion of the Air Force that could help you. I must be frank with you and tell you that I know of no such part of the Air Force that today investigates these complaints, but on your behalf, I will forward it on... we're an agency that has not investigated UFO sightings in almost eleven years. And then we were, in effect, told by the Congress and the President that we would not be doing that anymore."

Capt. Camp gave the witnesses their damage claim forms and suggested they get legal counsel. There was a brief Air Force investigation, but it was conducted by Camp and Captain Davison themselves following up on the interview. Their associate, Captain James H. Marburger wrote a report dated Aug. 20, 1981, with negative findings:

"The sighting occurred approximately 13 miles from (Houston Intercontinental) airport… surveillance radar from the airport  would most likely have ‘seen’ the helicopters operating in the UFO sighting  area… the area would be easily observed by pilots arriving or departing... pilots would have seen and reported the incident since it lasted 15 to 20 minutes, and since the 9PM time of the UFO sighting is a fairly heavy commercial airline traffic period."

There were no such reports; nothing on radar, no sighting from pilots, from personnel in the air traffic control tower, or anyone else. The investigation found nothing to confirm the UFO report by Cash and the Landrums, but gathered and filed the information for Air Force files, and later shared with the Army. 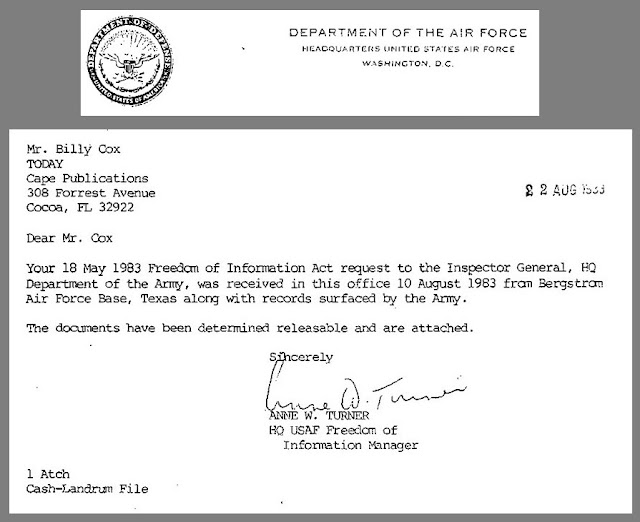 Journalist Billy Cox submitted a FOIA on the resulting Cash-Landrum records, and on Aug. 22, 1983 it produced a lengthy file on documents relating both to the Bergstrom AFB visit and investigation (and the Army’s DAIG report which will be discussed below). The contents of that file show a different picture of the military’s involvement with the case than is typically portrayed in UFO literature. Instead of a cover-up, there were numerous instances of government officials expressing interest in the case, and of military personnel cooperating and sharing information. The case documents are found in pages 46 - 81 in the linked PDF below:
Bergstrom AFB/DAIG FOIA Cash-Landrum file, 22 Aug. 1983

The Texas Department of Health, Sept. 1981 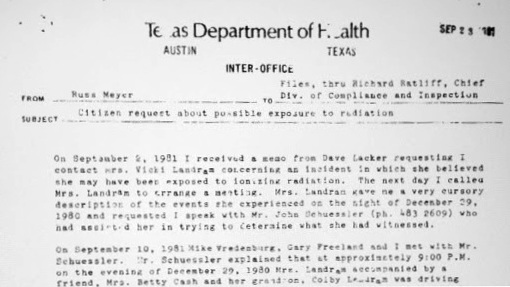 During the trip to Bergstrom AFB, Cash and the Landrums made another stop that led to a government investigation at the state level. The Texas Department of Health assigned their Radiation Control Board after Vickie Landrum visited the office of Representative Larry Browder. Browder ordered an investigation of the event and incident location, and Charles Russ Meyer headed the investigation. On Sept. 16, 1981 Meyer examined the roadway, took soil samples, and the subsequent laboratory analysis showed no residual traces of radiation. They did, however, extend an offer to have TDH doctors examine the witnesses and their medical records, an offer that was not accepted. The TDH files record no further contact, but they did continue to collect some subsequent news clippings about the case.

For further details and the The Texas Department of Health documents, see:
The Cash-Landrum Incident: The Suppressed Case Files 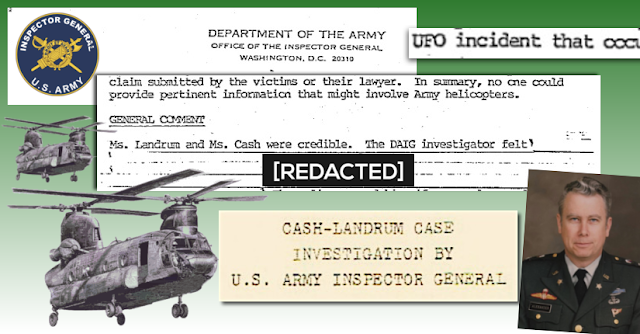 The Army’s inquiry has been previously discussed on BBL in John B. Alexander on the DAIG Investigation of the Cash-Landrum UFO Incident, but we’ll provide a brief recap.

As a result of the media attention given the case (the TV episode of That’s Incredible! in particular), Representative Ron Wyden from Oregon asked for an investigation into the US government’s alleged role in the C-L incident. Virginia Lampley was given the task at the Air Force, but after determining the helicopters in question were used primarily by another branch of military service, the job was passed on to the Department of the Army Inspector General (DAIG). Lt. Col. George Sarran was given the job, and his specific mission was to determine whether Army helicopters were involved in the incident, not investigate the UFO report. However, to prepare for his investigation, Sarran contacted several ufologists, John F. Schuessler, the primary investigator, his former colleague Capt. Richard C. Niemtzow, M.D., USAF, and Dr. Peter Rank, Radiologist.

John B. Alexander was not named in any of Sarran’s documents, but in his 2011 book, UFOs: Myths, Conspiracies, and Realities, Alexander described how he and his friend Dr. Paul Tyler were part of the investigation:

"George visited all the units that had similar helicopters... even checked with the U.S. Marine Corps... Being thorough, George made connections with the helicopter fleets of the oil companies that fly crews to the offshore rigs. The bottom line is that no helicopters could be located that could have been involved that evening.

George carried the investigation a step further asking for consultation from me, and two military medical doctors, U.S. Navy Captain Paul Tyler and Air Force Major Richard Niemtzow, both of whom specialized in radiation. Paul and I had worked together for several years in my interagency projects at INSCOM while Richard had prior experience with French UFO cases. Based on the physical evidence available, our conclusion was that the victims were telling the truth and had been exposed to high levels of radiation. However, this case simply defied any conventional explanation."

When I asked Dr. Alexander about the case in a 2013 email, he explained the problems with ionizing radiation from earthly technology as the cause of Betty Cash’s reported injuries, saying that such an exposure would have been lethal:

“As far as I know, we had nothing that would produce the kind of radiation illness that followed.  My view was that given speed of onset and severity of symptoms, they should have been at LD 100 (at least the two women) from any radiation source that we had.”

Lt. Col. George Sarran’s mission was to investigate the helicopters, not the UFO, but he had taken an interest in it. He found no answers, but of the witnesses, Sarran’s report stated:
“Ms. Landrum and Ms. Cash were credible. The DAIG investigator felt...,” but the following three and a half lines of his statement were redacted in the copy released by FOIA. A year later, Sarran was interviewed by Billy Cox for the Florida newspaper, Today December 6, 1983, and gave a statement that was probably very close to those redacted lines:

“I have no reason to believe that Vickie or the young man (Colby) or the policeman or John Schuessler or anybody else was lying to me. I didn’t get that impression from anybody or that they were crazy or mentally off balance or something.”

Lt. Col. Sarran conducted a thorough investigation, and his DAIG report concluded that there was no involvement in the incident by any helicopters; not from any US military branch, government agency, or anyone else. 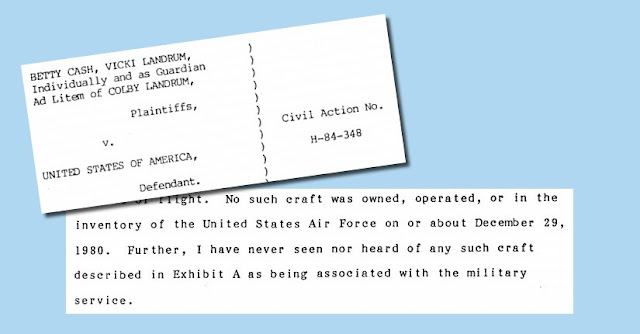 The original legal move in the Cash-Landrum case was for a damage complaint filed in Dec. 1982 against the Air Force. They were seeking $10,000,000 for Betty Cash, $5,000,000 each for Colby and Vickie Landrum. As a result, there was some kind of investigation by the US government by the Air Force in its defense, but we don’t have the records to indicate the scope of their inquiry.

The case was rejected, but the attorney Peter Gersten file an appeal. The response come on September 2, 1983, from Charles M. Stewart, Colonel, USAF, Director of Civil Law, Office of the Advocate General in Washington D.C.  The claim for damages was again rejected, and
Col. Stewart stated, "Our investigation has revealed no evidence of involvement by any military personnel, equipment or aircraft in this alleged incident."

When a civil suit was attempted instead, there was apparently another the inquiry or investigation by the government. All we know is that in 1984 it produced statements from the Air Force, Army, Navy, and also the National Aeronautics and Space Administration. The legal documents contain signed statements from each of these officials:


The statements indicated that each agency had no aircraft that resembled the description of the UFO. Maybe there’s some undiscovered documentation on the investigation. Each of these agencies may have some scrap of paper in relation to the C-L case, probably a request for the statements, but little else. The legal battle ended when the court case was dismissed for the final time in 1986.

We now know that members of some of the agencies denying knowledge of the Cash-Landrum event had members in a secret organization that was unofficially studying it and other UFO cases.

In part two, we conclude with the Cash-Landrum investigations by the Advanced Theoretical Physics Working Group, and how it relates to other UFO organizations and to the Pentagon’s AATIP. 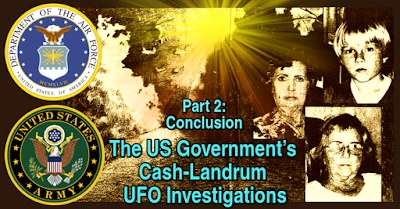