In part one, we saw how the Cash-Landrum case had been investigated by the US government in 1981 by officials from Bergstrom Air Force Base in Texas, in 1982 in by the Department of the Army Inspector General, and in 1983 by the nation’s defense team responding to the UFO-related lawsuit. In the conclusion, we’ll look at the subsequent secret investigation and how it relates to other agencies that may be covertly studying UFOs today. 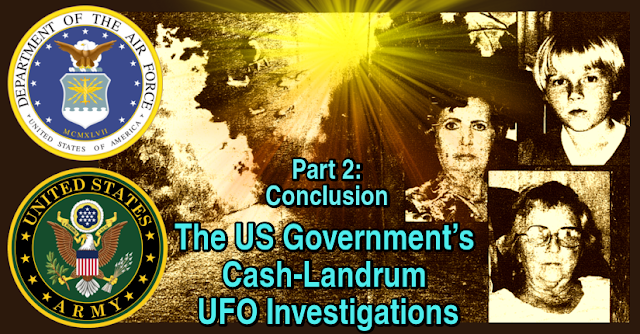 John B. Alexander has had a long involvement in the UFO and paranormal, and participated in the DAIG investigation mentioned earlier. Dr. Alexander’s publisher notes his lengthy interest and research into exotic studies: “life after death, mind over matter, UFOs, remote viewing, telepathic communications with animals, and more…” Chiefly known for his work in non-lethal weapons research, Alexander retired from the US Army in 1988 as a colonel, and along the way earned his Ph.D. in Thanatology at Walden University in 1980.

Dr. Alexander developed a network of friends and associates with similar interests, many of whom were also in the military, doing contract work for the government, the Intelligence Community, or professionals in private industry. One of those friends was Dr. Paul E. Tyler (1930 - 2013), a Captain in the US Navy, and medical consultant on the government’s remote viewing program. This circle of associates was valuable when Alexander put together the Advanced Theoretical Physics Working Group. The primary purpose of the group was to determine if there was a hidden UFO government agency, but their findings were negative. The team also studied a few UFOs cases, and the Cash Landrum incident was one of particular interest.

Dr. Harold E. Puthoff was a key member of ATP, and he kept his colleague Jacques Vallee informed of the group’s activities. Vallee’s journals record several entries on ATP, which he called "the Secret Onion." From Forbidden Science - Volume III (2016), by Jacques Vallee:

"Hal (Puthoff) and I had a lot to talk about… There was a meeting on frontier subjects in Washington recently. When Hal arrived he discovered the topic was UFOs, and the overall project was structured in multiple layers, like an onion. The meeting was classified above top secret, under a codeword. Fifteen attendees reviewed cases like Kirtland AFB, Cash-Landrum and Tehran. They included Howell McConnell and John Tyler. Kit (Green) had been invited but couldn't attend.
Two aspects of the meeting were ironic, Hal said. First, attendees were there because they ran programs that were impacted by unidentified signals but they were not necessarily interested in the UFO phenomenon itself.
Second irony: they came to the conclusion there must be a secret UFO project, somewhere else!"

"It has become known that the key meetings took place under DoE supervision on May 20-25, 1985 in the secure facility of the BDM Corporation in McLean, Virginia. The group called itself the 'Advanced Theoretical Physics Conference' or ATP. Alleged participants were Samuel Finch, Oke Shannon and John Kink of Los Alamos National Laboratory; Bill Wilkinson from CIA; Howell McConnell from NSA (whom I had met in October 1972); Hal Puthoff and Jack Houck; Ed Speakman of INSCOM (Army Intelligence); Bill Souder and Bob Wood of McDonnell Douglas; Jake Stewart of the Undersecretary of Defense for Research and Engineering; Bert Stubblebine of BDM; Ron Blackburn, Milt Janzen and Don Keuble of Lockheed; Ralph Freeman, Gary Bright, radiologist Paul Tyler, Ed Dames and Lt. Col. Mike Neery. Ron Pandolfi of CIA also claims to have been involved."

In Jacques Vallee’s entries on the ATP over the years, it is clear that the project never received funding or became an official government program. Dr. Kit Green “"refused to take part in the meetings as long as no budget had been allocated to give it an official status.” (Forbidden Science Volume III, 18 May 1986. P. 243)

John Alexander described ATP in June 2018, EdgeScience #34, "The Department of Defense and UFOs Redux," comparing his 1980s group with the AATIP effort from 2007:

"(AATIP) was just another in a series… of inadequate efforts to investigate one of the most perplexing issues to ever confront humanity… from 1984 through 1988, long before Senator Harry Reid was able to earmark funding for the DIA project, I ran a similar, albeit unfunded, effort... the name we employed for this project was Advanced Theoretical Physics (ATP)."

"One disturbing case ATP looked into became known as Cash-Landrum, named for the victims, two women and a boy, who were inexplicably exposed to high levels of radiation. The source was an unidentified craft that appeared to be in trouble above a desolate country road just north of Houston. We explored the Cash-Landrum case in depth because of lawsuits initiated against the U.S. Government under the assumption that the incident was caused by an experimental craft of ours that had caused the serious injuries. The case was later dismissed."

We have no record of the extent of the ATP’s study of the Cash-Landrum case, but we can get a hint of it by reading the comments on it by Dr. Alexander and his colleague, Dr. Paul Tyler.

In a 1993 lecture at MUFON’s Albuquerque, New Mexico, group, Dr. Tyler discussed his work with the ATP. The NM MUFON News # 12 (Jan. 1994) featured an article summarizing his talk:

Dr. Tyler was a consultant for the CIA and other agencies. “There were always people who were unofficially interested in UFOs... Was someone really looking at this? No one knew.”Dr. Tyler has a degree in radiology and was head of Aerospace Medicine for the Bureau of Medicine Surgery. He ran the program on electromagnetic radiation. He personally investigated the Cash-Landrum case in which UFO witnesses were burned by some kind of radiation. He studied the hospital records and concluded that it wasn't microwaves but had to be some sort of ionizing radiation. What was it? “Nothing that we have or had at the time.” Also, the reported helicopters didn't “fit into the military pattern.” There were not enough helicopters in Houston at the time nor people there to pilot them (it was Christmas week) -­ it wasn't a military operation. How does Dr. Tyler explain this case? “UFOs can do things we can't. Maybe they use holograms. If they want to confuse us they could put holograms into systems that we have.”

Dr. Tyler’s conclusions on the Cash-Landrum incident were in sync with what Alexander presented in UFOs: Myths, Conspiracies, and Realities, where he said it was “a very solid case, in which the observations and facts just don't make sense or support any prosaic hypothesis.” Alexander also speculated the helicopters were not physical, in a discussion of his precognitive sentient phenomena hypothesis, or PSP:

“One possibility would be that the UFO could employ holographic technology to create the UFOs. Another alternative is that the UFO was able to project that imagery directly into the brains of the observers, thus actually manipulating their perception of reality. It is interesting to note that the phenomenon would allow substantial physical injuries to the observers. Based on this case, and a number of others in which physical injuries have occurred, the PSP must not be mistaken as benign.”

Dr. Alexander’s ATP dissolved in 1988 after finding that no agency wanted to fund the project as an official government project. However, that didn’t exactly mean the end, as Alexander and many of the members remained interested in the UFO topic and moved on to other things. 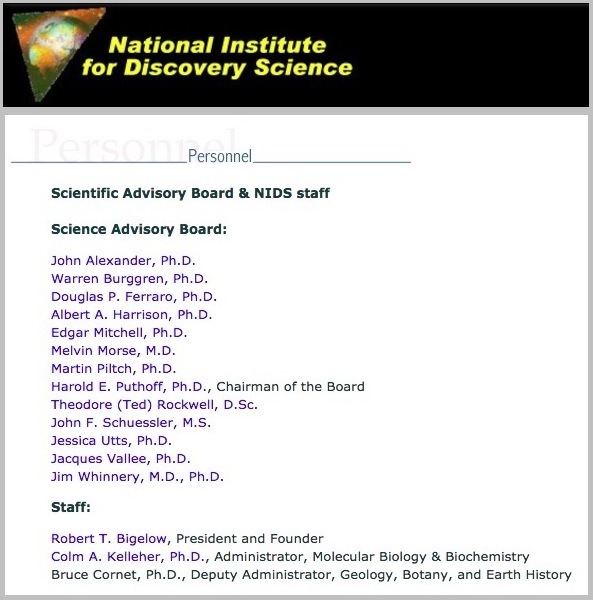 Dr. Alexander and Dr. Hal Puthoff went to become a player in Robert Bigelow’s National Institute for Discovery Science (NIDS). In 2004, NIDS was closed, but later replaced by Bigelow Aerospace Advanced Space Studies (BAASS), with Puthoff and some of the team remaining. In 2007, AATIP contracted BAASS, with Puthoff directing the scientific studies. In 2018 Puthoff and Colm Kelleher of BAASS went on to join Tom DeLonge’s To The Stars Academy (TTSA). 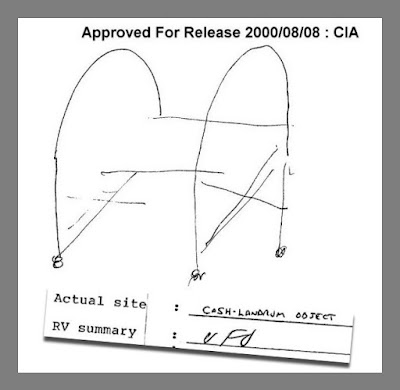 Before ATP, Dr. Hal Puthoff was one of the original SRI (Stanford Research Institute) team members and creators of the Remote Viewing program, which takes us to a final bit of trivia. The Cash-Landrum case was the subject of a remote viewing exercise documented in CIA files. In his article, Remote Viewing & UFOs at ATS, researcher Isaac Koi noted:

As some of you know, the CIA released over 92,000 pages of material relating to "Star Gate" (and various other official remote viewing projects in the USA, such as "Gondola wish", "Grill flame", "Center Lane" and "Sun Streak") in around 2004… it should of course be recognised that most of the documents in the Stargate archive do not relate to UFOs.

However, a few did, and one of the remote viewing documents recorded a session on 26 January 1988 looking into the “Cash-Landrum Object," where the remote viewer was “GP,” Gabrielle Pettingell, and the interviewer was “ED,” Ed Dames, who was part of Alexander’s ATP. 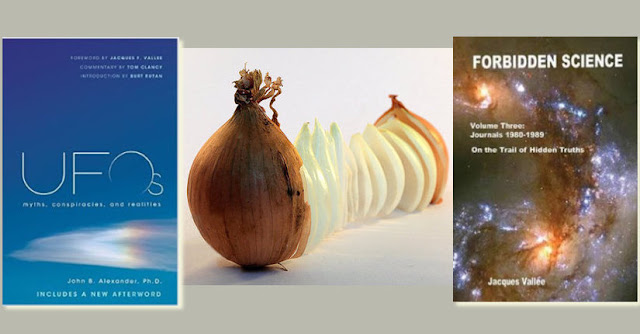 The “Secret Onion” nickname used by Jacques Vallee for ATP referred to the metaphor “peeling the onion,” which means getting a deeper understanding of something by examining it layer by layer. The irony is that the only thing behind the layers is more onion. John Alexander’s ATP group found no evidence that there was still a secret UFO investigation. His colleague Dr. Paul Tyler revealed in his 1993 Albuquerque, NM, lecture that the ATP searched, but, "In every agency, I ran into people interested in UFOs. But it wasn't their job and there was no money to look into it, so tidbits got filed into personal file cabinets!"

The government was not interested in fielding reports from civilians, just in sightings that could be military or national security matters. They shut down Blue Book, and what seems to have happened since is that any UFO incidents have been handled by the agency involved, from NORAD to the CIA. Whatever the US government may be doing in regards to UFOs, they are not interested in duplicating the public relations disaster problem of the Air Force’s Project Blue Book.

The Cash-Landrum UFO case is unique in that it has involved the US government at several levels, from Congressmen to the Federal Court, and official investigations by two military branches, as well as an informal study involving the Intelligence Community. Unfortunately, the investigations shed no light on UFOs, but there’s much that can be learned about the Government’s response to the case. It harkens back to the early days of confusion about flying saucer sightings. The military branches assumed the UFOs were something real, and were asking each other, “"It wasn’t us, but is this something you guys are up to?”
. . .


For further reading on the ATP UFO study, see the collection of information at Unidentified Aerial Phenomena - scientific research by Keith Basterfield, where he's interlaced data from sources such as John Alexander’s UFOs: Myths, Conspiracies, and Realities and Jacques Vallee’s Forbidden Science Volume III, Jacques Vallee and the 'Secret Onion'.