Quest for an Accurate Picture of the Cash-Landrum UFO

An earlier post, UFO Evolution: The Piney Woods UFO presented without comment how the depiction of the Cash-Landrum sighting changed from a featureless flying, flaming diamond into a glowing UFO ringed with blue lights. This piece will explain the transition and attempt to correct the record.

The witnesses in the 1980 UFO case near Huffman Texas were initially unable to provide many details about what they saw due to the intensity of the light coming from it. 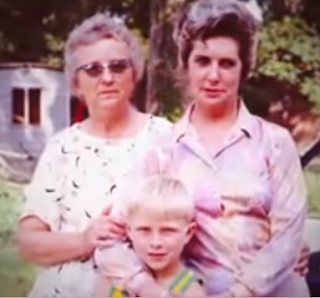 "[Vickie] Landrum said neither she nor Cash could define a shape for the object because the 'blinding' light projected from it. However, she said, Colby, who was viewing the object through the car's windshield insisted that it was 'diamond-shaped'. 'The light from it was just like someone was up in your eye shining a flashlight at 'em.’ Landrum said. 'Maybe he could see better from in the car or something, but we couldn't tell no shape to it. The light from it was glowing, lighting up the whole road like it would set it on fire.'"-The Courier (Conroe TX) Feb. 22, 1981 by Cathy Gordon

“The description given by the two women are very similar: tree-lined black-top road, object ahead (south of them) surrounded by a glow and a shooting red and orange-colored fire toward the ground. Betty described the object as just an extremely bright light with no distinct shape, Vicky said it was oblong with a rounded top and a point on the bottom, while Colby said it was totally diamond-shaped."-APRO Bulletin Sept. 1981 Vol. 29, No. 8 (Summarizing John F. Schuessler’s report)


Nowhere in the original reports is there any mention of any specific markings or lights on the UFO. There were however other UFO reports before and after the incident in Texas and surrounding states. some of those UFOs had lights, and there was an attempt by Schuessler’s team to connect the Cash-Landrum sighting to the other incidents. (Jerry and Glenda McDonald, see the Cash Landrum UFO Incident pages 311-4.)

Vickie Landrum was put under regressive hypnosis by Dr. R. Leo Sprinkle (in connection with National Enquirer magazine and the television program That’s Incredible!) to recover additional details about the sighting. During the session, two new details emerged, the scent of lighter fluid, and the mention of blue lights. John Schuessler interpreted the lighter fluid smell as the odor of helicopter fuel, and the lights as being on the fuselage of the UFO.

Colby Landrum was given a Lite-Brite set, a toy that makes pixelated images out of lighted pegs, and he used it to make a picture of the UFO. John Schuessler photographed the Lite-Brite picture, and it seems he interpreted the colored pegs used to illustrate the UFO's center as a ring of lights.

Together, this seems to be the origin for this description:

“The unusual aspect of the thing was its diamond shape. Small blue lights ringed the center and the points of the diamond seemed to be cut off.” John Schuessler, CUFOS Conference Sept. 1981

There is no broadcast or published statement from the original witnesses matching a description of blue lights. Betty and Vickie quickly accepted Colby’s diamond-shaped description, and began using it themselves to describe what they saw.

Vickie Landrum: “It was diamond-shaped and as tall as a water tower. It was a dull metallic color, and it just floated there.”She said red-orange flames were intermittently spewing from the bottom.-The Houston Chronicle, TX, Sept 25, 1981


Pictures of the UFO with a ring of lights began appearing in UFO literature: 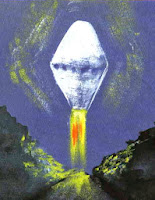 Chris Lambright and Tommy Blann were both interested in the case and paid a visit to Vickie Landrum. Chris had done a painting of the Socorro, New Mexico UFO sighting by Lonnie Zamora in an attempt to render it as technically accurate as possible. He used measurements from the official reports along with testimony and feedback from the witness in creating the painting. He was attempting to do the same thing with the Cash-Landrum sighting, and showed Vickie his unfinished painting based on published reports. She noticed a big problem- the UFO in the painting had blue lights. Further, she said that the object itself was dark, and if not for the light produced by the spewing flames, it might not have been visible against the night sky I've been corresponding with Chris, and he recently told me,


“I never did finish the oil painting I originally showed to Vickie Landrum, though I think it's still in storage somewhere. I did a few digital images not too long ago, and more recently tried my hand at a not-too-complicated rendition using a 3D program. That approach is really interesting because you end up with fairly accurate trees, road, grass, and you get a great idea of how light effects the entire scene.
It's still a guess on how bright the flames really were, and how reddish they were, etc. But you see things in a much more realistic what-you-see-is-what-you-get way. What really becomes obvious is how dark a dark grey object would have been in the sky, and brings home what Vickie said that if it hadn't been for the flames they might not have seen it at all.”

Chris did two variations of the scene, showing different degrees of lighting:

The above view reflects more of Colby Landrum's description.
“It was if the whole sky was splitting ahead of us."
-Vickie Landrum, The Courier (Conroe Texas)  Feb. 22, 1981

To date, this is the most accurate representation to what Betty Cash, Colby and Vickie Landrum described in their testimony. Chris Lambright is owed a great debt for his work in getting to the truth of what was reported in the Cash-Landrum sighting.