Cash-Landrum UFO Case: The Legend of the Scorched Road


The Evolution of a Legend

“Measurements taken during the post-sighting investigation showed their location to be about 130 feet from the strange craft.” CUFOS Symposium, Sept. 1981Schuessler, John F. 1988. Medical Injuries Resulting from a UFO Encounter. Mimi Hynek, ed. The Spectrum of UFO Research

“Following the in-home interviews, Vickie took Holt and Schuessler to the scene of the sighting. It was at this time that she did the first timed walk-through of the event. Fairly accurate notes on the location of the incident, UFO and helicopters were taken. The route was retraced and  statements about the activity were recorded. A step-by-step account of the helicopter encounter was made, noting where they were first seen, where they were reengaged, counted, and last seen.

The scene was revisited a number of times with Vickie, Vickie and Colby, and with all three victims. Other investigators were involved also. Some were with newspapers, others with television productions. John Schuessler participated in most of these excursions. Each time data was recorded and photographs taken.”
Schuessler, John F.pg. 4 MUFON UFO Journal September 1983

“As it neared the ground a huge cone of flames belched downward searing the macadam surface of the road.”Schuessler, John F. 1986. Cash-Landrum UFO Case File: The Issue of Government Responsibility. MUFON 1986 UFO Symposium

Another quirk was the unexplained repair of a melted spot in the road where the incident occurred, Schuessler said."I have photographs of a 15- to 25-foot area where even the center stripe was wiggly," he said.A year later, he said, the spot had been resurfaced. Schuessler said county officials denied any knowledge of the repair.Twice Burned, Not Shy Stung By Radiation, Ridicule, Trio Stick To UFO StoryHouston Chronicle September 15, 1991 By Cindy Horswell

As Seen on TV:

“They were able to tell us exactly where along the road that they stopped, because there were certain markers that identified the spot. They were able to point out exactly what they saw-- the object coming down out of the sky, over the road, and hovering there. They were able to point out a spot on the road that indicated that it had been heated to an extreme level of heating. It was burned, and it was very clear to the naked eye. Several weeks after we went to the spot and saw this burned area, someone came along, dug up the road and hauled it away and replaced it with new asphalt. Some of the witnesses that watched this happen said that people brought in unmarked trucks, dug up the road, put the material on the trucks, covered it with a tarpaulin, and drove away.” Schuessler, John F., Unsolved Mysteries February 6, 1991

But based on John Schuessler's original report and interviews with the primary witnesses:

Flames intermittently “whooshed” down towards the road;
later examination showed no marks on the pavement.

Colby Landrum:“My grandmother told me this is the section from about here about 135 feet in back, and they stripped the pavement from about this point to 135 foot back towards in on the road.”“Well, I had heard from different sources. Somebody had told me it was black, unmarked trucks that come in here and actually stripped it. It should throw a red flag up to somebody.”
UFO Hunters Alien Fallout episode aired January 14, 2009

The road replacement episode sounds like a local legend that somehow crept into case records because the primary case witnesses believed the story and repeated them. The claims of the scorched road seem to appear only after the road was repaved.

Yes, the road was repaired, but not immediately. It seems to have happened about a year and a half later, during a period of expansion and construction, when convenience stores and apartments started being built in the area.


The disclosure by Schuessler to the Texas Department of Health (during an investigation at the request of Vickie Landrum) that the witnesses could not identify the sighting location is very difficult to reconcile with his later claims. The legend of the road replacement comes so much later than the events, it would seem to have no legitimate bearing on the case.

More about the road from someone who should know:

Alan Holt participated in Schuessler's first visit to the scene, and is the only other VISIT member who wrote anything about the case.

Vickie and Colby Landrum, Betty Cash traveling isolated road near Dayton, Tex, December 29, 1980 Diamond-shaped UFO emitting a plasma-like flame from the bottom blocked the road. Object rose (flame emission stopped) and was surrounded by 15 double  and single rotor helicopters which “escorted” the object as it moved toward the southwest. UFO and helicopters were observed two more times by the witnesses. UFO and helicopters were noted by additional witnesses

Maneuvers Observed
Hovering with emissions of plasma pulse moving up and down (propulsive-like effects), beeping sounds
Descended and ascended at a slow rate

The above is from Alan Holt's lecture given at the same conference Schuessler first presented the case. His description of  the UFO's physical behaviors and effects make no mention of burns to the scene. 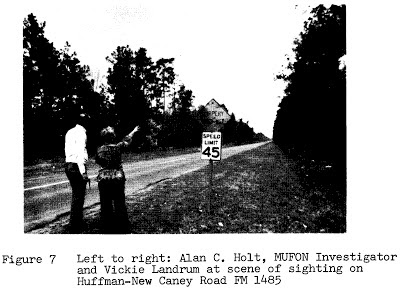