The physical evidence in the Cash-Landrum UFO incident is much of what makes it such a compelling and enduring case. Another key factor is the reputation and expertise of the case’s chief investigator John F. Schuessler who had the difficult jobs of seeking evidence, promoting the case and protecting the witnesses. The medical records have been long protected by Schuessler, citing the privacy of the witnesses as reason for withholding them. What is less widely known, is that there was other case evidence that Schuessler chose not to share. Part of that evidence, a previously unknown government UFO file will be made publicly available here for the first time. 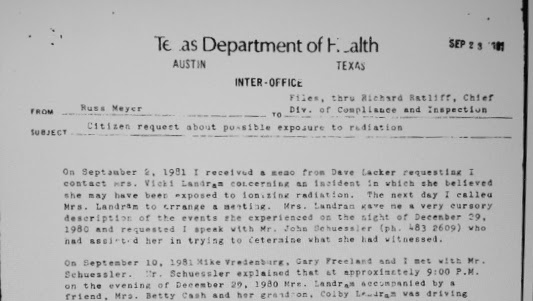 In the summer of 1981, Schuessler was busy preparing a presentation on the case for the September Center for UFO Studies symposium. Meanwhile, Vickie Landrum and Betty Cash were working on the case themselves. In late July 1981, it seemed their efforts were beginning to show results. Senator Lloyd Bentsen replied by letter to Betty, advising her to contact Bergstrom Air Force Base to file a report and claim for damages, stating that “...they will be most willing to assist you in any way possible.” Betty took a flight to Texas, and together with Vickie and Colby, made the long drive to Austin to visit the base. On August 17, 1981 they finally came face to face with Government officers. Their hopes and expectations were high, perhaps unrealistically so, due to the effusive tone of the letter. Base officials merely questioned them about the events, then explained that the Air Force no longer investigated UFO cases. The witnesses were told there was nothing the Air Force could do beyond providing them with damage claim forms. They were profoundly disappointed, and it proved to be just one event in a long series of false hopes.

Some news clippings set the stage for the report:

Before leaving Austin that day, the three paid an unscheduled visit to their state representative - Larry Browder, D-Coldspring. Browder was out, but an aide was alarmed enough to take notes. She promised to do what she could.Trace Effects: The Cash-Landrum Incident by Billy Cox Florida Today  12/6/83
At the request of state Rep. Larry Browder, D-Coldspring, the Texas Department of Health’s Bureau of Radiation Control is investigating the Dayton incident.
“We came into this thing fairly late in the game,” said Russ Meyer, manager of the state’s public health department in Houston.
On Sept 16, he drove the stretch of road where the sighting is supposed to have occurred. His radiation detection equipment did not find any traces of remnant radiation in the area. He also took soil samples, but their testing of them is not complete yet.
“If there had been radioactive contamination in large amounts, some would still be left there,” he said. However, he said certain types of radiation - such as ultraviolet light, infrared light and low-energy X-rays - might not leave any residual traces.
Meyer has recommended that the trio’s medical records be reviewed by the state health  department’s medical advisory board. Specialists he said, could differentiate between radiation and symptoms that could be attributed to such things as chemical toxins.
-The Houston Chronicle, TX, Sept 25, 1981 State, private agencies probing claims of UFO encounter by Cindy Horswell

Department chief Russ Meyer, spent a whole day - Sept 16- scouring a 10-mile stretch of open highway between Huffman and New Caney. “Our major purpose was to verify the presence of radioactive trace effects, but we found no evidence of that. The only conclusion we could draw was that there was no residual radioactive material in the area at the time. If those people suffered radiation contamination in that area, it must have had a short half-life.”-Trace Effects: The Cash-Landrum Incident by Billy Cox Florida Today  12/6/83

“I have no doubt those women saw something,” he said. “But as to whether they were zapped with radiation, I don’t know. They could have been exposed without there being any residual trace long the road.”-The Courier Conroe TX, Oct. 30, 1983 6A UFO victims plan to file $20 million suit by Cathy Gordon

The events springing from August 17, 1981 trip to Austin and the information that came from it were apparently not pleasing to John Schuessler, who downplayed their significance and  concealed the information and reports produced. Schuessler said of the the Bergstrom interview “It revealed revealed nothing new” (MUFON Journal Oct. 1982), but examination of it reveals some witness statements that contradict Schuessler’s version of the story. Instead he claims that the meeting was a failure, another act of US Government refusing to help the victims. In reality, the advice and damage claims forms obtained at that meeting led to the filing of legal case, and the publicity given to the witnesses allowed their story to be heard by the public.

The other witness meeting with Government representatives on August. 17 led to an investigation by the Texas Department of Health’s Bureau of Radiation Control. The TDH report revealed that there was no residual radiation found along the road, but they were not dismissing the case. They made an important offer: they were interested in continuing the investigation, starting with their doctors examining the medical records. There is no documentation of it in the TDH files, but Schuessler refused or ignored the State’s offer to help the witnesses.

There is another piece of information in the TDH report that was incidental in their investigation, but has immense significance to the UFO case history. Charles Russ Meyer began his TDH investigation by contacting Vickie Landrum on September 2, 1981. She gave him a brief description of events and suggested he contact John F. Schuessler, for further details. Meyer and two TDH associates met with Schuessler September 10th. Schuessler provided them with a detailed account of the events and the medical treatment given to Betty Cash. Meyer needed to start his investigation with examining the scene for traces of radioactivity. he asked Schuessler about the location. From the report:

“I then asked Mr. Schuessler if he had pin-pointed the location of the siting. Mr. Schuessler stated that due to the late hour and the ladies’ emotional state they could only state that they believed they saw the object on the straight portion of FR 1485 between a beer joint and some kind of highway warning sign.”

The discrepancy between what Schuessler reported to the TDH team and what Schuessler said about the location in his UFO reports is troubling. When discussing the case, Schuessler told how the witnesses were able to return to the precise location, and that the scene contained some identifiable, distinct features:

“It is interesting to note, that although neither Vickie or Betty had been back to the site since the incident, they both were able to take us to nearly the exact same location. The separate site visits verify the location of the incident for us.”  -The Cash-Landrum UFO Incident, page 54

“They were able to point out a spot on the road that indicated that it had been heated to an extreme level of heating. It was burned, and it was very clear to the naked eye.”-Unsolved Mysteries (NBC) February 6, 1991

“We had a very large flying machine that that came over the road that actually left marks on the road, so you know where it was exactly.”   -Sightings (Sci-Fi Channel TV Series): “Physical Effects” July 31, 1992

Betty Cash was interviewed by telephone by UFO researcher Chris Lambright on July 12, 1985 while the legal case was still brewing. Lambright asked her about the sighting location, and she replied, “I have only been back on that road twice. And I have no desire to ever go back on it again.”

Betty moved to Alabama shortly after her initial meeting with Schuessler and she was not available for field investigations. There were two filmed on-site recreations of the event that Betty Cash participated in, one for “That’s Incredible!” in July 1981, and another for “The UFO Experience” in 1983. Schuessler participated in these productions, so it is possible that his later claims of her identifying the location stem from these media events. It was Vickie Landrum and her grandson Colby that accompanied Schuessler on the attempt to find the sighting location.  Photos were taken at the general area, later to be said to be the precise location.

The Meyer report documenting that Schuessler and the witnesses not knowing the precise sighting location does answer some troubling questions. Now we can understand why there are no photographs of a scorched road or trees, and why soil/pavement samples were never presented as evidence. The claim that the sighting location was found and investigated was the foundation of his case. If this claim was false or inaccurate, the entire case is tainted. It raises other questions about how evidence was presented and just how much of it can be verified.

The Texas Department of Health (TDH) Bureau of Radiation Control file can be viewed in full as a PDF at the link below.

Texas Department of Health file: Complaint C-12
Table of Contents
(Note: Files not in order, presented as scanned by the TDH.
Pages 1-8 are inferior duplications. Better copies presented later in the file.)

In the appendix of John F. Schuessler's The Cash Landrum UFO Incident, he reproduces a VISIT  memo documenting his meeting with TDH officials. This doesn't answer the questions about the location controversy, but it may provides some insight into why the State's offer of medical help was refused. 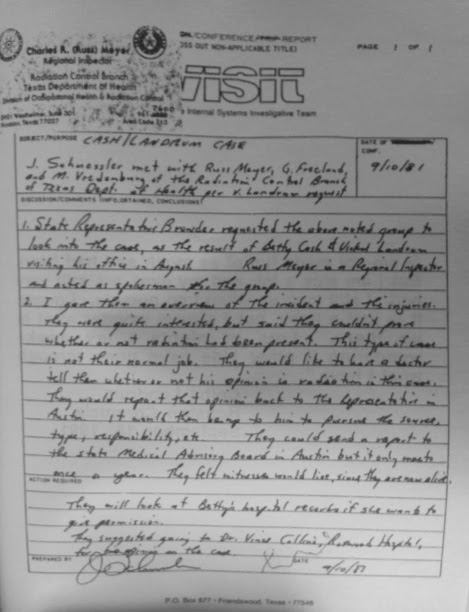 Discussions/Comments (Info. Obtained, Conclusions)1. State Representative Browder requested the above noted group to look into the case , as the result of Bettty Cash & Vickie Landrumvisiting his office in August.  Russ Meyer is a Regional Inspectorand acted as spokesman for the group.

2. I gave them any an overview of the incident and the injuries. They were quite interested, but said they couldn't prove whether or not radiation had been present. This type of case is not their normal job. They would like to have a doctortell them whether or not his opinion is radiation this case. They would report that opinion back to the representative in Austin. It would then be up to him to pursue the source, type, responsibility, etc.    They could send a report to the state Medical Advisory board or but it only meets once a year. They felt they would live, since they are now alive.

Action Required  They will look at Betty's hospital records if she wants to give permission. They suggested going to Dr. Vince Collins,  Rosewood Hospital, for his opinion on the case.

(Dr. Vincent Collins was a prominent radiologist in Houston.)