Here's a review of one of the earliest books on UFOs, Flying Saucers, a skeptical look at the topic by a prominent astronomer. It's an interesting look into the state of things while the field was barely its infancy.

The 'flying saucer' scare of 1947 was not the first of its kind, but no previous epidemic of this type of mass hallucination ever spread so far; 1947 provided a proof that modern mass media of communication can spread rumours as fast as they can spread true facts. Another reason for the difference was that in 1947 few scientists gave public utterance to what they knew to be the true facts of the case. In addition, the general public seemed to be rather more gullible in 1947 than on previous occasions; their their smattering of knowledge about aeronautical progress seems to have been associated with an attitude of mind which provided fertile ground for the pseudo-scientific belief in space travel, and even for the remote idea that the saucers were interplanetary space ships. Culmination of the affair was the report — a complete hoax which, however, many found quite plausible — that a wrecked saucer made of some unearthly metal had been found, and that this contained bodies of dwarf astronauts from Venus— described as "midgets wearing 1890 clothes" made of some untearable fabric!

There were, of course, some real flying saucers that gave rise to the fantastic rumours. As the author of this book says, these were as real as rainbows. Dr. Menzel, astrophysics professor at Harvard, here provides full explanations of the different types of optical tricks which the atmosphere and its contents can play on human eyes and describes the optical phenomena which account for the flying saucers of 1947.  His account of these matters is excellent though he is far more entertaining when he is disposing of the various fanciful interpretations which people gave of those phenomena  He shoots to pieces the American book Behind the Flying Saucers [by Frank Scully] which was serialised in Britain and which did so much to propagate the hoax about the midgets from Venus. 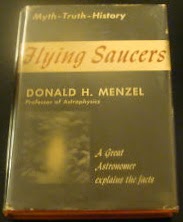