Roger Glassel, with help from other cooperating researchers has provided details proving that the location where the "Roswell Slides" mummy was photographed.


In a previous article here, The Placard of the Roswell Slides: The Final Curtain, it was shown that the placard on the body shown in "Roswell Slides" had been read, and confirmed the identity of it as a mummy in a museum. Further information has been collected  and published at the Roswell Slides Research Group site: The Child Identified


Details of the Body

Further information and documentation continues to be found, and it has been proven that the mummy was a young child that was displayed at the Mesa Verde Museum. Specific details present in the photograph are described. 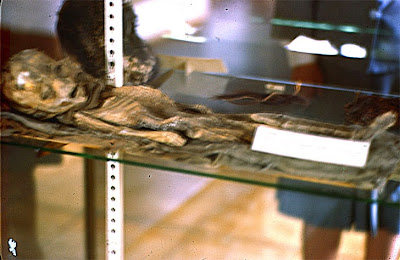 "Another excellent mummy in the Mesa Verde Museum is that of a small boy of perhaps two or three. X-rays of the teeth have not been taken so the exact age is uncertain. The body is well mummified, but small patches of skin are missing and the lower part of the right leg has disappeared. The skin has lost all of its former color and is an uninteresting dull gray shade. Part of a small slip-over cotton shirt still hangs around the shoulders. Several pieces of cotton in which the body was wrapped are well preserved. This mummy is not popular with visitors. It has such a negative personality that it has never been named. Even though it is well preserved, it fails to click. The spark is not there; that certain something is missing."

The placard has been read, and matched to historical documents that precisely describe it. The location is known, and no real mystery remains about it.


A further matching detail on the location


A bench seen in behind the museum case seems to match that in this photograph of  the Chapin Mesa Archeological Museum at Mesa Verde National Park in Colorado. http://npshistory.com/nature_notes/meve/vol8-1f.htm

Now that the location is known,many other details are also being matched. The placard font and distinctive border.


For further facts on this story, see the Roswell Slides Research Group.
Posted by Curt Collins at 10:29 AM