Long before Steven Spielberg's Close Encounters of the Third Kind, Devil's Tower had a connection with extraterrestrial life. An ancient connection. 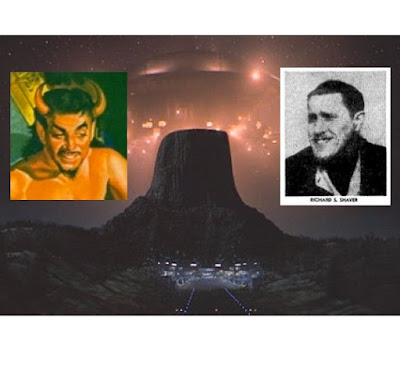 April 1947, two months before the report of flying saucers by Kenneth Arnold, "The Shaver Mystery" was the sole focus of editor Ray Palmer's June 1947 issue of Amazing Stories. The Shaver Mystery was about how we humans are the offspring of god-like ancient aliens, the reality behind all our myths and legends. After abandoning Earth, some of those they left behind were transformed into nasty little degenerate "deros." We came to call their space ships UFOs, and from their cavernous secret underground bases, their dero offspring are responsible for abductions, mutilations and other  of mankind's woes. Ray Palmer's editorial explains:

With the aid of such machines as the telaug (telepathic augmentor) and disintegrating rays, plus various instruments such as the "stim" which enhanced physical and emotional pleasures, these dero took to tormenting surface people and thereby being the basis for all of our legends of cavern wights, little people, demons, ghosts and — during the war — gremlins. They cause many unexplained accidents, such as those train wrecks, plane crashes, cerebral hemmorhages, etc. which are otherwise unexplainable.

Further, Mr. Shaver declared that the Titans, living far away in space, or other people like them, still visit earth in space ships, kidnap people, raid the caves for valuable equipment, and, in general, supply the basis for all the weird stories that are so numerous (see Charles Fort's books) of space ships, beings in the sky, etc.

Richard Shaver's article for the June issue, "Proofs," was a response to the critics of his writings. In his introduction to his essay, he talks about the problems of being an experiencer or witness and knowing and telling the truth:

My strength is dedicated to informing you of the key and the way to the kind of life that produced the beauty and wisdom of those immortal beings of the past, beings whose actual existence has been proved a thousand times to those who, like myself, have had actual experience in the caverns. For we have seen and touched and used those antique mechanisms and we know whereof we speak. But until today, those who knew have feared to broadcast their knowledge, for in olden times it would have meant being burnt at the stake, and today most certainly the insane asylum.

There were giants in the earth in those days 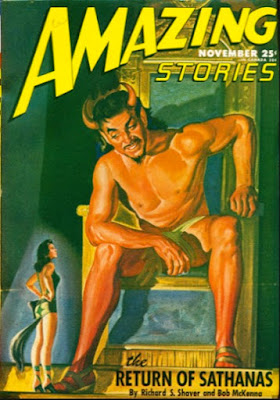 Shaver's Titans were giants, and had been mentioned in the the Bible, and myths around the world. But for those who needed even more evidence, he delivers in Proofs." 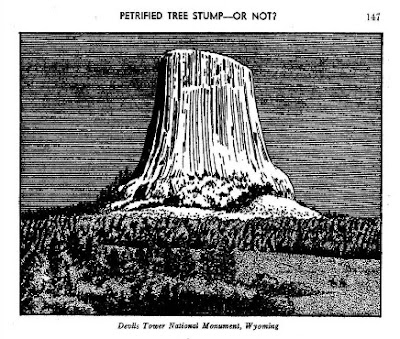 YOU ask for proofs of the giganticism of the far past — and you can find Devil's Tower (Wyoming) in any Atlas. It is a national monument ! If it isn't a gigantic petrified stump larger than any redwood ever hoped to be, I will eat my hat! The stump alone is taller than the Empire State building! What size were men when trees grew that size?

THEY were the men who are spoken of as the Aesir, under Ygdrasil's branches, planning a battle against the Frost Giants! And they had telaug beams (Odin's Eye), and they had "magical" underground dwarfs, and icy underworld realms of magic — and we have only the Devil's Tower to prove it today. But it was a long time ago; when the sun itself was more beneficial and less aging. BUT, BROTHER, HOW CAN YOU ASK FOR PROOF WHEN YOU HAVE A DEVIL'S TOWER?

On the need for Disclosure

Richard Shaver fought against skeptical unbelievers, railed against official denials, and can be said to be a founding father for Disclosure:


MANY things could be obtained of infinite value from these people in the caverns, if all of our civilization was aware and trying to salvage even a bit of the mighty wisdom the Elder race left behind them in their miracles of machine art. BUT it can't be done as long as "officialdumb" frowns upon all such efforts as "superstition," "black art," or "crackpots." It is a vital and unseen side of our life WHICH MUST BE OPENED TO THE PUBLIC GAZE!

“The fact is that any honest investigation of super-normal manifestation always and invariably turns up mighty important data; which data is shelved by fearful, ignorant and bigoted people who are quite sure that the school books are right, and that they cannot go contrary to opinion or they will lose their ‘position.’  ...SOMEONE, SOMETIME, HAS TO CONQUER THAT BLIND DENIAL OF FACT AND COME OUT IN THE OPEN WITH THE TRUTH...”


There's much more to Shaver's argument in "Proofs." For those who dare to read it all:


The telaug of the dero could affect our minds, so who knows what misinformation they were making Shaver believe... or what they are making us believe now!