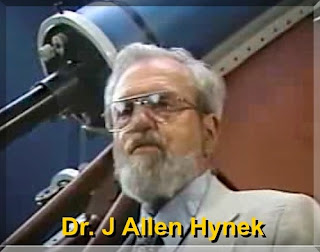 “Ufology today is in the state I would say chemistry was when chemistry was alchemy,  a mixture of superstition, wild ideas, unproved claims, and yet out of that whole mess, finally the very first class science of chemistry evolved. And I think the same thing is going to happen eventually with Ufology, but right now, it is a mess.

There’s a fantastic amount of wishful thinking, of desire, of pseudoscience, of pseudo-religion, of cultism, but eventually, I think that will all finally sink to the bottom, and we’ll have out of the whole thing a clear liquid of something we that can really see, and I hope, understand.”

Hynek is back in the news, due to the biography by Mark O'Connell, The Close Encounters Man: How One Man Made the World Believe in UFOs.  O'Connell interviewed people who knew and worked with Hynek, and was given unprecedented access to Hynek’s professional files as an astronomer, and the UFO documents and correspondence at the Center for UFO Studies (CUFOS). 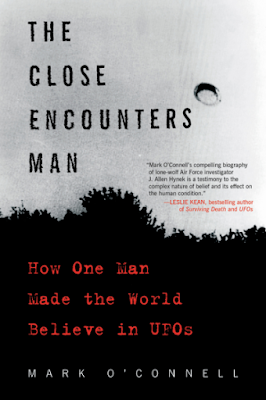 It's not exactly a UFO book, but it touches on a lot of the topic's history in telling the story of the man, Josef Allen Hynek. So in that sense, it's a book that' is accessible to non-saucer buffs, and also provides an interesting look UFOs as part a cultural phenomenon, and Hynek's evolving role in making it happen.

More details about the book and the author can be found at this page at The Book Cellar.