Publisher Bill Gaines' EC Comics produced a number of comic book series, best-loved for their anthologies of science fiction and horror stories, the most (in)famous of which was Tales from the Crypt. EC is remembered for their outstandingly sophisticated stories and art, and for their O. Henry-type surprise endings, similar to what Rod Serling would later do on television in the Twilight Zone.

Not Keel, It's Keely

Weird Science-Fantasy #25, (EC, Sept. 1954) featured "Flying Saucer Report" written by Al Feldstein and illustrated by Wally Wood. It's a fictional story, but cites quite a bit of genuine UFO history through the eyes of "Frank E. Keely," a composite character based on Major Donald E. Keyhoe and Frank Scully, the best-selling authors of The Flying Saucers are Real and Behind the Flying Saucers.

The story must may have been a practice run. The following issue, EC tried something even more ambitious. Bruce Lanier Wright in Strange Magazine said:


"The most memorable UFO comic ever, though, has to be EC's Weird Science-Fantasy #26 of December 1954. In contrast to the light-hearted, sardonic tone of the earlier saucer stories, this issue was a serious treatment of actual UFO sightings based on the writings of Donald Keyhoe, a respected investigator of the era. Keyhoe spent an entire day with the EC staff, who constructed a series of accounts featuring actual names, dates and quotes from Keyhoe's files. The book received a good deal of national publicity and became a sellout."

More about the special non-fiction Weird Science-Fantasy issue in a later BBL posting.

Getting back to Feldstein and Wood's "Flying Saucer Report," it's interesting not only for covering UFO cases like Kenneth Arnold and Thomas Mantell, it also provides an interesting cultural perspective on the "UFO cover-up," how the military denials and skeptical scientific explanations were perceived by the public circa 1954. Roswell, of course, was not mentioned, but Silas Newton's Aztec saucer crash story (made famous by Frank Scully) was. There's even what may be the first visual depiction of a secret military recovery of an ET body from a UFO crash for an alien autopsy.

Many of the details in the story seem to have been pulled from Donald Keyhoe's then-current book, Flying Saucers from Outer Space:


"... Scully reported that two flying discs from Venus had crashed in the Southwest. In the wreckage, according to Scully's informants, investigators found the bodies of several little men. The Air Force, said Scully, had spirited the bodies and the discs away for secret analysis."

The Original Art for the Story

Jim Halperin is an active collector of rare comic books and original comic art. His site presents scans of the original artwork for "Flying Saucer Report," the 8-page story, reproduced large enough for it to be read in its entirety online. 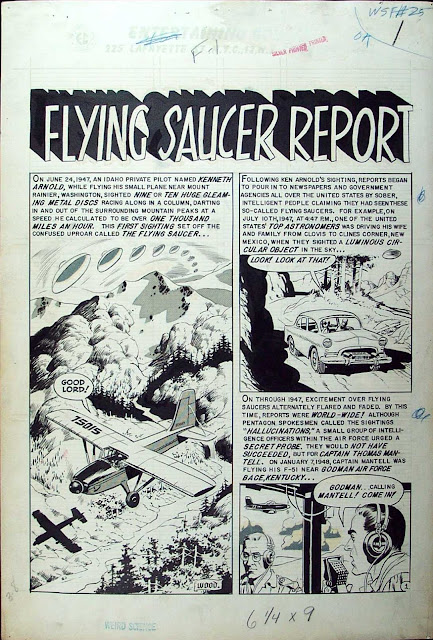 Visit this link, click on the story page, then click on the art again to move on to the next page.
Weird Science-Fantasy #25, "Flying Saucer Report"