John Keel, Witness to the Birth of the UFO Subculture 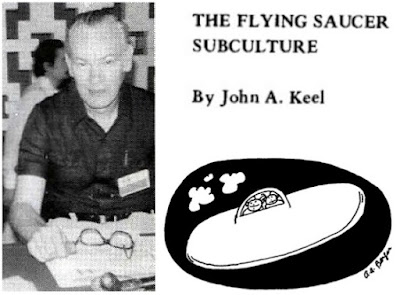 In the UFO and paranormal field, we'd have nothing without the witness. No matter what you think of the work of John A. Keel, he was there to witness to the birth of the UFO phenomenon, including the subculture that sprung up around it. In a 1992 interview with Andy Roberts, Keel said,


I read Charles Fort when I was very young, when I was about 14 or 15 years old. I was reading Amazing Stories in those days too, and they were getting letters to Amazing Stories about thing people had seen in the sky – this is before 1947 – and I was writing a newspaper column at that time for my home town newspaper and I did a couple of columns on that kind of thing, lights in the sky and people who saw contrails high over head and thought that that was some kind of spaceship or something... Anyway, I was around when the whole UFO thing broke...

Doug Skinner has a great site, "a tribute to that unique writer and character,  John Keel, Not An Authority On Anything. He talks about Keel's early work:

John published a science fiction fanzine, The Lunarite, in 1946... The first issue appeared on a postcard; the second was a single sheet on light pink paper... Keel fans may be intrigued by his early mention of the “Shaver Mystery” in that first issue. A BEM was a “Bug Eyed Monster,” a cliche scorned by true stfans.

John Keel was aware of how the pages of Amazing Stories discussed things like mysticism, psychic phenomena, Forteana and science fiction notions of extraterrestrial space visitors as both fiction and fact. Amazing's editor Ray Palmer went on to co-found Fate Magazine in 1948, taking those concepts and presenting them exclusively as fact. The cover story for the famous first issue was Kenneth Arnold's "The Truth About The Flying Saucers." Ray Palmer had been an active part of the subculture of science fiction fandom, and developed similar, overlapping subcultures for the Shaver Mystery and later, UFOs. 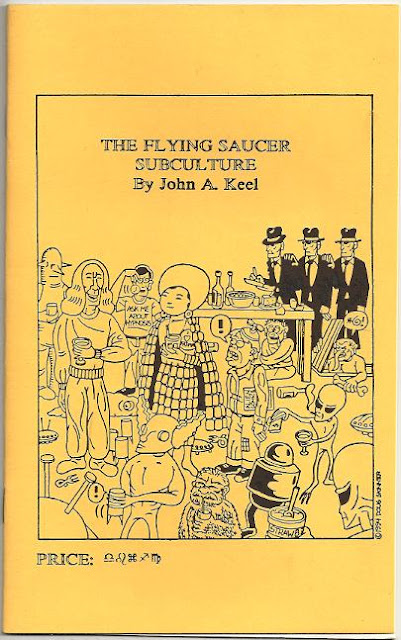 John Keel saw this all develop, and in 1973, he wrote an article, "The Flying Saucer Subculture." Doug Skinner description of it from his Keel site:


John Keel published several booklets in the ’90s, under the imprint of the New York Fortean Society...One of these was The Flying Saucer Subculture, from 1994. It contained an article John had written in 1973 for The Journal of Popular Culture (published in 1975)... a thorough history of ufology, detailing its literature, personalities, and theories. John took delight in adding 105 footnotes, as well as a three-page bibliography. His assessment was, as is to be expected, negative: he dismissed most of the literature as “almost totally paranoid and insane,” and a “sea of trash.” He did, however, single out many researchers for approval...I drew the cover for this booklet; John and I had great fun with all the ufological in-jokes."

It's a great piece, and it documents some pivotal moments of history willfully ignored by other UFO authors. The original article: The Flying Saucer Subculture - John Keel on Scribd

A related piece was written by Keel in 1983, an article on Ray Palmer, “The Man Who Invented Flying Saucers,” originally published in the Fortean Times. Although Keel's ideas, observations and opinions were controversial, his role as a witness to the birth of the UFO phenomenon should be recognized and remembered.
Posted by Curt Collins at 10:47 AM