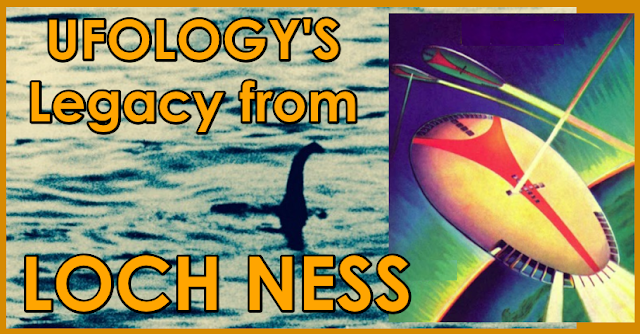 Last year, my friend Claude Falkstrom gave a high recommendation for a book on the Loch Ness Monster. Although it sounded interesting, I took no action, mostly due to feeling that I knew the story already. Recently he virtually forced a copy on me, and I found I’d been wrong. There was more in it new to me than not, and I found the book to be brilliant. As Claude had told me, it also indirectly had much of value pertaining to the study of UFOs.

The book is A Monstrous Commotion: The Mysteries of Loch Ness by Gareth Williams, 2015.

The press release for the book provides some biographical data on the author:
“Gareth Williams is Emeritus Professor and former Dean of Medicine at Bristol University. An internationally recognised authority in diabetes and obesity research, he has written 200 scientific papers and authored or edited over 20 medical books…”

With that background, one might fairly expect a scientific evaluation of the evidence, but this is something different, a detailed look at the history of Loch Ness sightings and of the people who pursued the study of the alleged Monster. The book is also heavily illustrated, with pictures of the key figures, maps, and photographs taken by the witnesses.

The Loch Ness Monster story really took off in 1933, getting over a decade’s head start on the flying saucer story, but they are close enough together in time and character to almost be twins when it comes to the matter of pursuing the respective mysteries. Williams shows how the story began in the press, but unlike Kenneth Arnold’s flying saucers, the Loch Ness Monster was slow at the start. Once it emerged, it seemed almost equally contagious, and many other sightings followed the first. Unlike saucers, which could be seen anywhere, the Monster could only be seen  at the Loch. In time, a flood of visitors came to try to catch a glimpse as the legend grew over the decades.

As UFO authors would later do, reporters and investigators dug through historical records for matching reports. Indeed, old reports of mysterious events in the Loch were found, from myths and legends to newspaper stories. Though many of them differed in substantial details, it formed a database of sorts, driven by witness testimony. Some of those witnesses had multiple sightings, “repeaters,” with too much of a good thing. In time, there were a few photographs of varying quality, and a famous one came to be known as “the Surgeon’s Photograph.” It showed the definite form of an animal, taken by a witness, a professional man of unquestionable reputation.

There were hoaxes, however; phony tracks, monsters and photos, frequent frauds that confused the issue and poisoned the topic in the minds of scientists. The fakes damaged the efforts of those who were pushing for a scientific inquiry. That takes us to another familiar element from ufology we find in the book, the clash between proponents and skeptics. Williams says of the supporters:

“Hoaxers might have taken the Monster’s name in vain, but they had little impact on the rapidly increasing numbers of believers around the world. ”

Regarding the opponents, even in the face of credible witness testimony and quality photographs:

“The vast majority of mainstream zoologists… were still unpersuaded that the Monster was real. They were entrenched in their scepticism, just as the scientific establishment had been since the 1930s. To them, the Monster was not the greatest zoological coup of the century, but a preposterous insult to the intelligence of anyone who understood the basic rules of science.”

Williams’ book is not a dry history, and one of its greatest strengths is making the figures discussed come to life, particularly Sir Peter Scott, the painter and conservationist who was persuaded to become an advocate for the scientific study of the Loch Ness Monster. With Scott’s reputation supporting the effort over the decades, the topic was given an air of respectability.

It was a struggle to have the studies taken seriously, and the scientific establishment seemed fiercely opposed to any effort by the advocates to have the Monster classified as a real animal. As a result, some reputations were damaged. A Monstrous Commotion chronicles at least one scientist who lost his job due to his support of the animal’s reality.

Nessie’s supporters scored several victories in the 1970s, most notably when an underwater photo was taken of the creature’s flipper and placed on the cover of the prestigious Nature magazine. This was an enormous boost for the hypothesis that Nessie was a surviving aquatic dinosaur species, and it encouraged other scientific attempts to investigate.

The book’s finale wraps the story up nicely by revealing some of the parts of the story that were hidden in the early days, the identities of some of the players reporting the news, making sighting claims, and in one instance, taking photographs. In another nice touch, Williams includes a chapter, "The human factor," that tells what became of the key people involved in the story of the Monster. Over the years, not all evidence was presented honestly, and some of the players involved seemed to have covered up some inconvenient facts. In his final chapter, he notes, “Almost all of us want the Monster to exist, whether or not we believe in it.”

William's book provides a perfect case for ufologists to study; to step away from their saucers and to look at how belief and media promotion can give something a mythological life of its own, quite independently of whether or not the underlying subject matter is of substance or not.

A Monstrous Commotion: The Mysteries of Loch Ness by Gareth Williams can be previewed on Google Books, and you’ll find several options there for getting the book in print.