If you haven't read it, it's STILL news!

I’m sure you saw it splashed over the news, the Air Force recently declassified and released Project Blue Book UFO files, and that for the first time ever, they are available for viewing on the Internet. 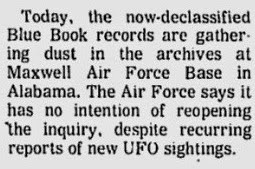 But they didn't languish in that Air force black vault forever. Die-hard UFO researchers worked with the files on microfilm, but a decade ago, they were presented digitally on your friendly neighborhood Internet.

Maybe it's just a remake

How does the media get things so wrong? Part of it is that there’s a rush to report (or recirculate), and little fact checking is done. That, and some of the reporters were born yesterday. Sometimes, things like this happen; the media suddenly notices something and falls all over it to become an overnight success after 20 years.

It can happen when an unknown book gets chosen by Oprah, or for a movie adaptation. Sometimes it comes on their radar when a box office bust of a film becomes a hit on video. Worse, sometime they mine a classic and issue a remake for a new generation.

Even in the UFO topic, some things become news, over and over. Like the FBI’s memo on the Aztec hoaxed flying saucer crash. In its latest exhumation, it was passed off as proof of Roswell.


Is this just bad reporting, or a case of them using anything and everything shiny that catches the notice of their open minds? I'd like to blame the Twitter age of news media, but this kind of thing is not new itself. There’s one that goes back to the coming of the flying saucers.

Good Evening, Mr. and Mrs. America, and All the Ships at Sea 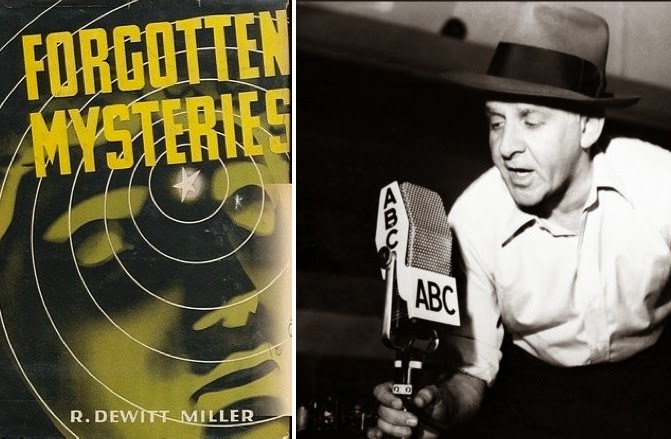 We forget the incredible influence radio once had. Radio commentators such as Walter Winchell (and Frank Edwards) had their finger on America’s pulse sometimes reporting the news, other times making it. They also did a lot to introduce and propel the UFO story. Winchell’s show was printed as a newspaper column, and in this story from the July 7, 1947 San Jose News, he said, “The mystery of the ‘Flying Saucers’ is not new.” Then goes on to cite a recent book by R. DeWitt Miller, Forgotten Mysteries.


R. DeWitt Miller’s book was chiefly a collection of articles on phenomenon from Coronet magazine, and one chapter focused on strange aerial objects. It enjoyed the flying saucer spotlight, but only for about a day. Someone finally noticed that he cited Charles Fort as his inspiration. 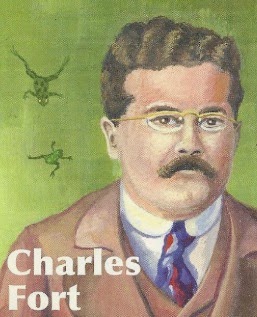 Miller noted that there had been speculation "That conscious beings from other worlds have actually reached this earth and navigated our skies in space ships." That speculation was chiefly from Charles Fort, who had collected accounts of strange flying things and speculated that they were interplanetary.


It wasn't long before Walter Winchell was quoting R. DeWitt Miller but we know he could have done better than that. As it turned out an Associated Press reporter made the discovery in Chicago's Newberry Library. There the reporter claimed to have discovered a "rare unknown” book, the scarlet colored volume titled The Book of the Damned.

Thayer howled with laughter when he read about the “great discovery.” Awhile after this "discovery” the news agencies tracked Thayer and the Forteans to their lair to ask: "Who was this guy Fort?" And: "Can we quote such and such?" This was the high- point of the whole history of the Fortean Society and it was sad Fort himself was not alive to take a well-earned bow.  (From UFOs: A History Vol. 1: 1947 by Loren Gross)

Major Donald Keyhoe used the Fort foundation to build his article and later book, Flying Saucers are Real, and thereafter, every so often a reporter would “discover” Charles Fort and report that
“The flying saucer story, you know, is by no means a new one.”

Anyway, the news has a long history of getting things jumbled, even when they are really trying. Sometimes it's corrected, but those notices reach far fewer eyeballs. What's news, will yet be news again... someday.


If you haven't read it, it's STILL news!