The relationship of Science Fiction to UFOs is a complex one. Debunkers are too quick to blame fantasy for influencing Flying Saucer reports, and proponents are too quick too deny it. Old time SF fans wanted nothing of flying saucers, and FS fans felt the same way about SF.

There's a relationship, to be sure, with ideas form one camp influencing the other. Sadly, most of the discussions of this tend to be heavily biased. The UFO/Science Fiction topic needs further examination.

Science fiction, at its best, is examining how new ideas and inventions affect mankind. In effect, it's shining a flashlight into our future.

Many people around the world were introduced to science fiction in the form of an enormously popular newspaper comic strip that began in 1929. Science fiction writer, Philip Nowlan teamed up with artist Dick Calkins to create Buck Rogers in the 25th Century. It literally defined science fiction. There was a shorthand term for advanced technology, and it was "Buck Rogers."

“When we endeavor to envision the future of aviation, we come to the conclusion that Jules Verne was a conservative man and that Buck Rogers more closely approximates the role of a realist. Some of the potential developments in aviation are so far reaching that they might easily amaze and confuse the hero of the Sunday supplement.”
(American Aviation magazine, 1941.)

A letter to Astounding Science Fiction

In the February 1949 issue of Astounding Science Fiction, editor John W. Campell printed a letter from an avid fan, W. H. Entrekin Jr. It serves as good examination of the intersection of UFO and science fiction ideas at the time.  The latter half of the letter deals strictly with comment on earlier magazine stories, but I've included it for the sake of completeness.

(Note: STF stands for Scientifiction, an elegant and archaic term for science fiction.)

At last technological development has caught up with the science- fiction artists and illustrators. I am not referring to anything else but Paul Orban's' spaceships. Note illos for “The Rull,” et cetera.

Also the filler cut of the multi-windowed ship you use frequently. The only sad thing about this development is that evidence lends support to the extra-mundane origin theories of Charles Fort and other dubious adherents, among them members of our own genre of stf authors—needless to say, with the recent crop of wacky theories.

First came the “flying saucers”, or “disks”. Perhaps Phil Nowlan and Dick Calkins could be credited with the idea and cartooned version of the flying disk much, much earlier in the Buck Rogers strip.
Well, Kenneth Arnold of Boise brought science-fiction up-to-date with the first observation of the flying disks. And finally, stf has been caught up with in the form of Orban's ubiquitous, eternal spaceship.

On Saturday, July 24th, two EAL pilots, Captain Clarence Chiles and Co-pilot John Whitted, on the Houston-to-Atlanta-to-Boston flight, at 2:45 am.(CST), in their DC-3, reported a wingless aircraft that passed them at tremendous speed. They were flying at five thousand feet in the regulation CAA designated airway when they spotted the aircraft, it being almost in their line of flight, headed in the opposite direction, towards Mobile and New Orleans. The DC-3 was about twenty miles southwest of Montgomery, Alabama.

Captain Chiles related: “I hate to say this, but it looked just like a Buck Rogers rocket ship. If I see anything else like this, I think I’ll have to quit flying. We were flying along on the regular airway when we saw ahead and slightly above and to our right what appeared to be a tremendous jet of flame. It flashed down and we veered to the left and it veered to its left, and passed us about seven hundred feet to our right and about seven hundred feet above us. Then as if the pilot wanted to avoid us, it pulled up with a tremendous burst of flame out of its rear and zoomed up into the clouds. Its prop-wash or jet-wash or rocket-wash, take your pick, rocked our DC-3." The pilots describe the ship as about one hundred feet in length, and about four times the circumference of a B-29 fuselage. It had no wings.

A twenty-five-to-fifty foot red flame was shooting from the rear, and there was a blue, fluorescent glow under the whole length of the fuselage. Captain Chiles further related, “It had two rows of square windows, apparently from an upper and lower deck, and the interior was brilliantly lighted. We saw no occupants. I’d say it was going between five hundred and seven hundred miles an hour."

The following Sunday morning the story appeared in various Georgia papers, the Atlanta Constitution carrying sketches of the ship by both men. The singularly remarkable thing about the incident, is that the sketches were remarkably similar to Orban's ships.


Well, these things happen every day so to speak. The alarming fact is that no matter what the theory that explains the phenomenon, as infinite numbers of theories do as long as it is a workable theory, the PHENOMENON STILL REMAINS.
I guess I’ll have to go back through Charles Fort again.

(The rest of the letter is about the Aug. 1948 issue of Astounding Science Fiction.) 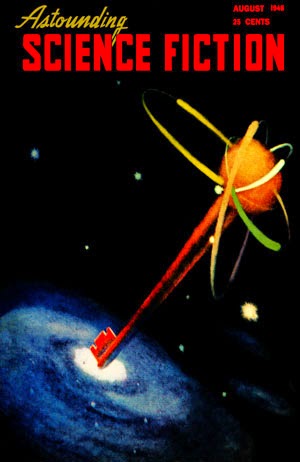 As for the contents of the August issue. The cover takes my breath. Canedo is too, too utterly para- or hyper-symbolic. And no story titles to mar the front either. I guess yon J have finally decided that ASF sells itself on its own merits rather than having to resort to standard pulp tactics. Psycho-dynamics applied to the masses.
Your editorial — simply superb!

Let’s have one tying in Non-Newtonian system of action-by-contact, and the standing confused controversies over quantum mechanics giving us readers the low-down latest discovered subatomic particles and and their relation to our present systems, with probable effect on classical set-up. Oh well, such an evaluation would be quite a thesis for a graduate work much less asking it for the price of two-bits.

Oh yes— the stories. “The Monster” takes first place with the tag van Vogt placed well before the denouement — "This race has discovered the secrets of its nervous system." "Time Trap" grabbed second, I like Harness' new words - Hardtimes (sterechronia).
"Dreadful Sanctuary” has to show. I just couldn't resist his description of the rockets' lifting for their maiden voyage. Thank you Eric and John. After all,  everyone didn't get to see the lift of a Vr-2 at White Sands. Or maybe I'm just a dreamy-eyed fool. (I'll bet I have company on this one.)

“Smaller Than You Think" was fourth, with "Dawn of Nothing" hitting fifth. Quite an issue. The liquor ads have been bounced and the fans are now happy with the new program of the Fan-ad.

When do we get some of the unwritten Future History series or does Bob like three to five cents a word better than honor and tradition? However, ya’ gotta eat!

To A. E. van Vogt— "Let's have in Asimov-type yarn concerning corruption of the Galaxy with the unique system of Null-A."
Time for a Kuttner serial.

A bonus Buck Rogers tidbit from the files of Project Sign, a note about Kenneth Arnold.