One of Ours? Earth Technology Candidates for the Cash-Landrum UFO

If the Cash-Landrum UFO incident in December 29, 1980 could have been a military operation, the leading candidate would be a  Delta Force exercise by Task Force 158 practicing for a rescue of American hostages held in Iran. If the UFO was part of this, it must have been intended to serve a specific and necessary purpose for that mission. Based on the mission needs and what the witnesses saw, two of the most logical possibilities are either a battlefield illumination system, or a vehicle to provide transportation of the hostages. I’ll cite some known experiments along those lines and suggest a few past projects that were designed for similar purposes. Most of these possibilities, however, do not suggest causes of injuries reported in the case. If it wasn’t an alien space ship or a WASP II, what was it?

The following is a visual checklist of candidates I gathered in 2012. Some of this equipment might have played a role in this or other UFO cases.*

Vertical or Short Take Off and Landing vehicles are desirable when areas for landing strips are not available. The embassy building where the American hostages were being held offered no landing strip for a rescue mission except for a nearby soccer stadium. In an effort code named Credible Sport, Lockheed modified at least two C-130 Hercules planes, expanding their lift surfaces and equipping them with a series of rocket thrusters to allow them to make use of an  incredibly small landing strip for the size of the plane. 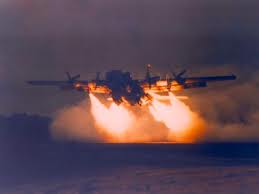 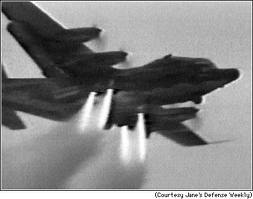 On a test flight on October 29, 1980, a crash destroyed one of the planes and the program was reportedly scrapped. The test was top secret and developed at breakneck speed, ignoring standard safety protocols. Credible Sport was developed as an Air Force project. Is it possible that they had other vehicles in development for this mission, or that other military branches were conducting tests? 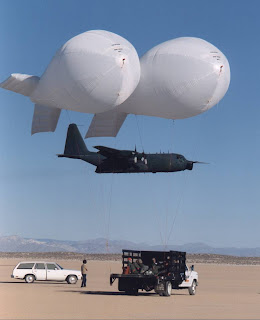 There were tests run on systems based on the Fulton surface-to-air recovery system (STARS). From the JTF (Joint Task Force) Capability Review:
“Project Nite Fite investigated the possibility of using a hot air balloon mated to existing in-flight satellite recovery systems. The system would be capable of recovering 7-10 personnel on a single pass.”

The bright light produced by the UFO is puzzling if it was part of a rescue operation. Task Force 158 was drilling for night missions using night vision goggles, which seem incompatible with airfield or battlefield illumination techniques.
The light may have been produced by a powerful military flare of some kind.

The most mundane scenario is that the UFO was an Army helicopter outfitted with high-powered illumination equipment. With the beam directed towards the witnesses, they would be unable to see past its brilliance to identify the vehicle.

Carbon Arc Searchlights were designed, and built as a searchlight to search out, and illuminate enemy aircraft at over 20,000 ft during World War II. It has a 5 ft, 5 mile beam length visible for over 35 miles.
Further details and history of searchlights: http://www.victorysearchlights.com/

These are just possible candidates to investigate; ones that had a military connection and a reasonable chance of being in play on that night in December 1980. While none of these are a perfect match, it is worth examining the military technology in use at the time that could have produced UFO reports.


*Notice the frequent use of question marks, a journalistic tradition to make the author sound like he's really on to something while just clutching at straws.
Posted by Curt Collins at 7:30 AM